Giannis Antetokounmpo was viewed as a ‘freak’ long before that same term became an endearing nickname – and a public identity – in the National Basketball Association.

He grew up as one of five siblings to Nigerian immigrants and was stateless, forced to avoid drawing any attention to himself or his family in Sepolia, a gritty neighbourhood in Athens.

Racists would target the family, said to be the only black family in the area, in the darkness of night. It was a chastening childhood and one he is determined to never forget.

He would actively avoid going out late at night, instead staying home and keeping himself to himself. It was a struggle where nothing was taken for granted. 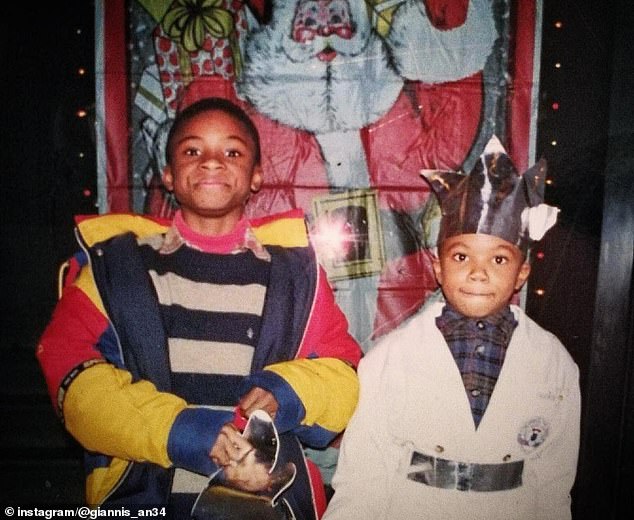 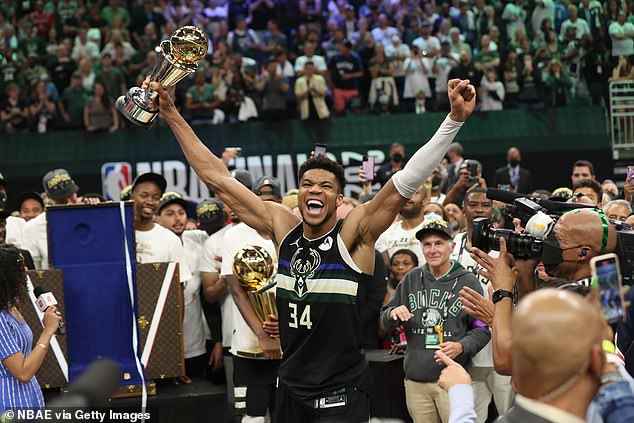 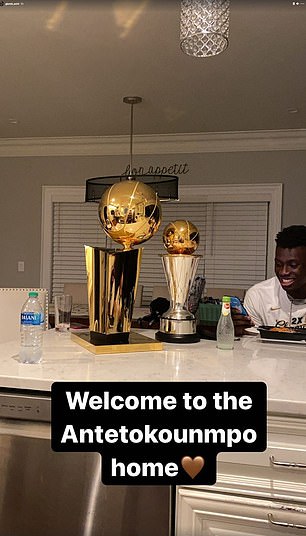 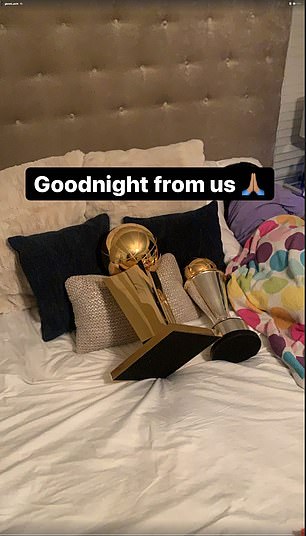 It often gets overlooked but the man people now know as Giannis Antetokounmpo was actually named Giannis Adetokunbo – the change aligned with the Greek spelling that was printed on his passport.

He identified as Greek-Nigerian, determined to keep the African side of his heritage prominent, despite never visiting Nigeria as a youngster.

Parents Veronica and Charles left Lagos, Nigeria, in 1991, leaving behind their eldest child, Francis, with grandparents in the process.

The plan was to seek out a better life for their ever-expanding family. Three years later, Giannis was born.

The issue was that without the necessary papers for residency and citizenship, finding work for both Veronica and Charles proved a thankless task.

So tricky was it to get consistent employment, and thus consistent income, Antetokounmpo can vividly remember the nights where they would have to go hungry.

‘Sometimes, our fridge was empty,’ Antetokounmpo told the New York Times in 2013.

‘Some days, we didn’t sell the stuff and we didn’t have money to feed ourselves.’ 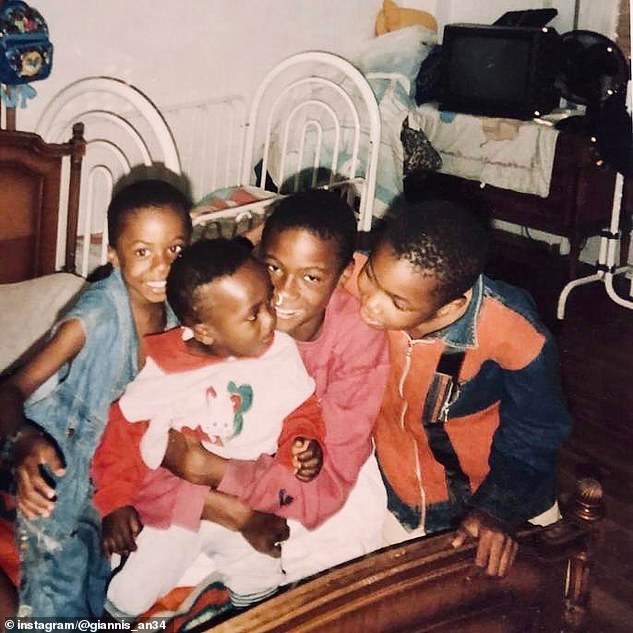 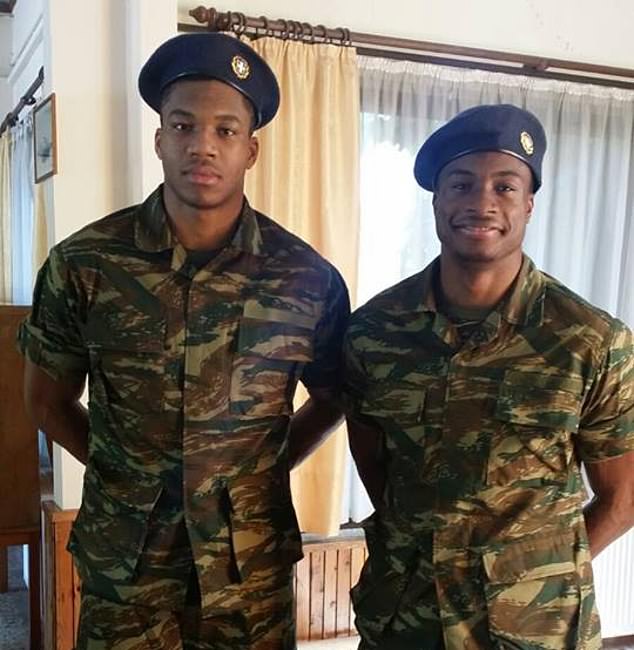 Alongside his older brother, Giannis (left) had to complete three months of military service

But with the fridge occasionally empty and a busy household, the Antetokounmpo children needed to work. It was that or go hungry – again.

He would try to sell DVDs and sunglasses on the streets of Athens to bring in much needed income to help his parents, as well as his siblings. Some days it worked, others it didn’t.

Veronica, in an interview in 2013, revealed that the family was once evicted from their property for failing to pay their $455 monthly rent.

The Antetokounmpo story is as much about perseverance against discrimination as it is about pure, world-level talent.

Both his parents held their own sporting prowess with mum Veronica a respected high-jumper and his dad a footballer in Nigeria, albeit briefly.

A football-mad household, the Milwaukee star grew up as a boyhood Arsenal supporter and it came as a surprise to the parents when Giannis, and his older brother Thanasis, became hooked on basketball. 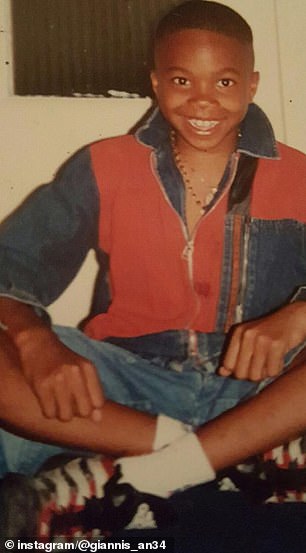 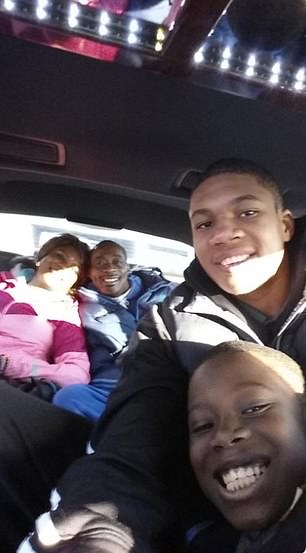 Giannis (left) was viewed as an outsider in Greece as the family were without valid documents until he was 18. His parents Veronica and Charles (seen right) left Nigeria to start a better life 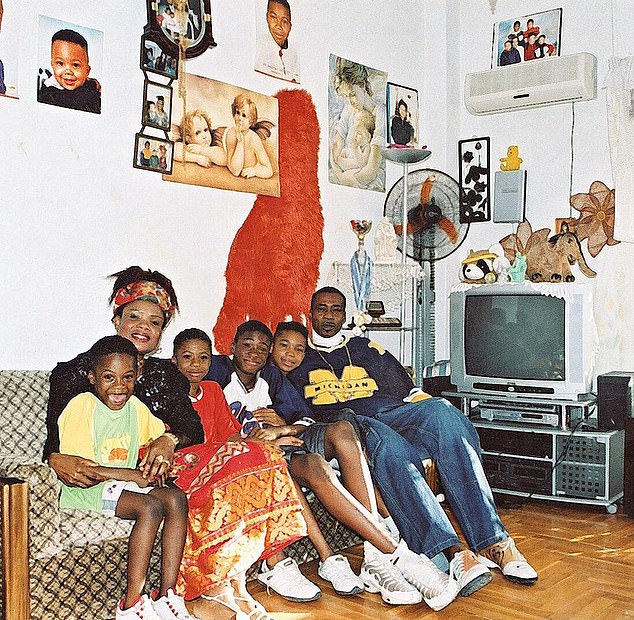 THE MAKING OF THE GREEK FREAK

‘I played soccer from nine until 12 and then 12-and-a-half I started playing basketball,’ Antetokounmpo said in 2020.

Money was still tight and so it was one pair of trainers to share between them for basketball games and practices. The family were right on the edge of affordability. If food was an issue, trainers for every child was a mere fantasy.

‘He was just a guy you would see in the street, hungry and looking for food,’ Chris Iliopoulos Odoemelam, who grew up and played street basketball with Antetokounmpo, told the New York Times in 2019.

‘He didn’t have anything. He had one pair of shoes that he had to share with his brothers. And now he’s a millionaire. It’s crazy.’

Let’s rewind before getting to the part of his incredible life story where millions come into play.

Giannis began playing basketball in 2007 and early reports from those in Greece said that he did not know how to properly dribble.

For a coach and a team, he was a complete blank canvas.

Spiros Velliniatis is the man credited with discovering a raw Antetokounmpo as he roamed the immigrant areas in and around Athens in search of unscouted talent.

Velliniatis can still recall the moment he saw a gangly Giannis hustling on a free local court alongside his brothers.

‘I could see that Giannis had real skills in changing direction,’ Velliniatis told the New York Times.

‘He had huge hands and a frame that looked poised to grow. It was like something stopped me from the sky. The moment I saw him, lightning struck me.’ 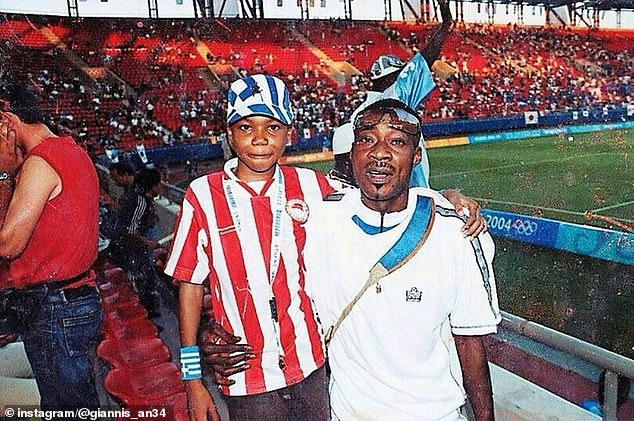 The Milwaukee star (left) grew up a huge football fan and his boyhood team was Arsenal (pictured: Giannis and his dad Charles, who was pro in Nigeria, watching an Olympiacos game)

The Greek Freak, as he is affectionately known now, remains totally committed to his family 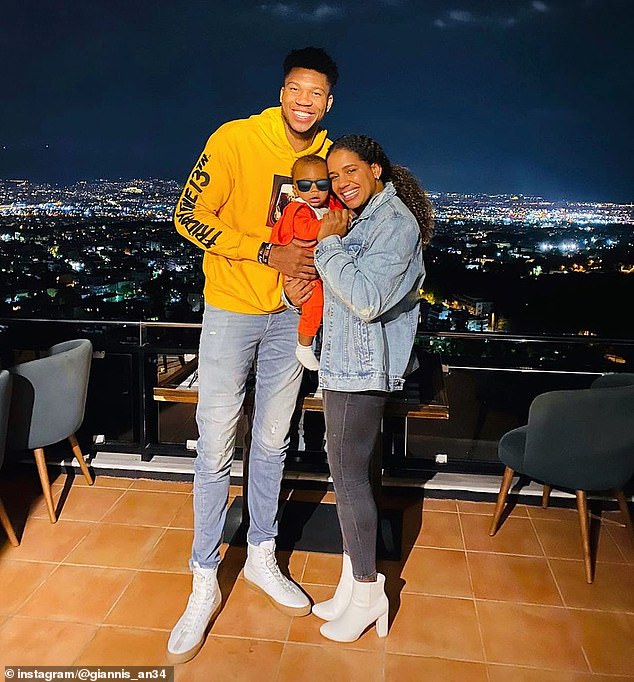 He added: ‘I had a discussion with God in this moment. You can call me crazy, but this is the way I felt. I said, ‘Father in Heaven, am I seeing correctly?’ And I said, ‘Why me?’ And the answer that I got was, ‘If not you, who?”

Velliniatis was sold but there was a natural scepticism from the family that had built up over the years of being mistreated by authorities and those who treated them with suspicion for being an immigrant.

The coach saw potential in Giannis and in the family – Thanasis was of interest also – and so Velliniatis pleaded with bosses at his Filathlitikos team to financially support Veronica and Charles to allow the brothers to play sports, joining the team in 2011.

‘You’re in front of Mozart and he has no food, what do you give him?’ Velliniatis said.  ‘The answer is not a violin. The answer is a loaf of bread.’

And so he channeled his frustrations in practice with Filathlitikos, only for team-mates and their parents to question why he was being given special treatment when he appeared to show no skill-set.

Being stateless represented its own obvious risks, deportation being No 1. But deported to where? He was neither a Greek citizen or a Nigerian citizen. He’d never been to Lagos. Antetokounmpo was a young man stripped of identity. 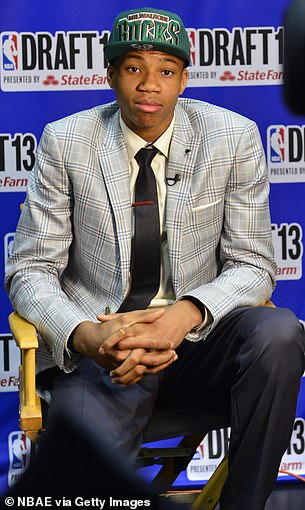 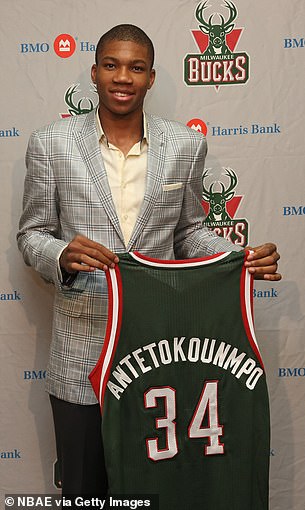 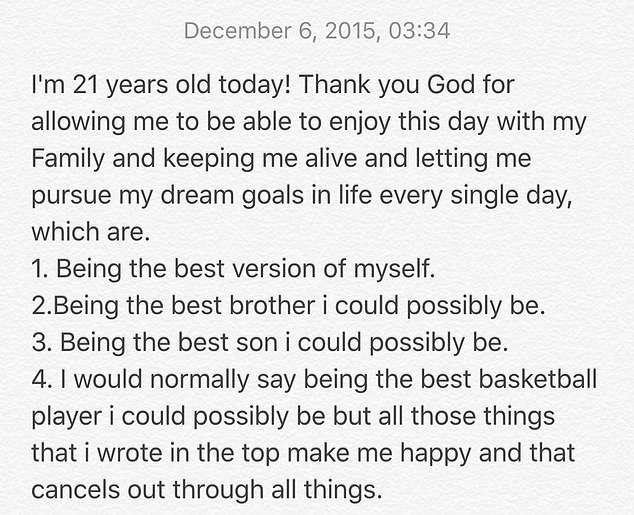 It wasn’t until 2013 that he was able to officially get Greek citizenship, helped in no small part by his ascending public profile.

Scouts were coming over en masse to watch him work out in the Filathlitikos gym.

There was talk of a switch to Spain, with Real Zaragoza following him, but it was the NBA that came calling, specifically the Milwaukee Bucks, convinced they could polish a diamond that was very much in the rough.

With a Greece flag in his hands, a then 19-year-old Antetokounmpo was a first round pick in the NBA draft, selected at No 15 by the Bucks.

It was a landmark moment for the family as well as for Greece. The NBA is one of the most marketable and star-driven leagues in all of sport. He was the face of a nation.

The teen signed an $8.6million rookie deal. Overnight he was rich beyond wildest dreams. Days of selling bric-a-brac items on the streets of Athens were over.

But not all back in Greece could accept his rise to superstardom.

Right-wing politician Nikolaos Michaloliakos compared the new Bucks rookie to a ‘chimpanzee’ in a TV interview.

As recently as 2018, the Antetokounmpo family were again being discriminated against in Greece.

Thanasis, who was then playing for Panathinaikos, helped beat bitter rivals Olympiakos 93 to 80 and Greek commentator Takis Tsoukalas publicly referred to Thanasis as a ‘monkey.’

It was a shocking incident and while Giannis was busy working hard in Milwaukee, it was not something he was willing to let slide, not after everything his family went through.

‘If this could happen to Thanasis, who always proudly represents Panathinaikos and Greece with a smile, I can’t imagine what other people of colour go through in Greece,’ he wrote on Instagram. ‘I’m extremely saddened and disappointed.’

His social media activity soon became famous, including in 2014 when he first had a smoothie 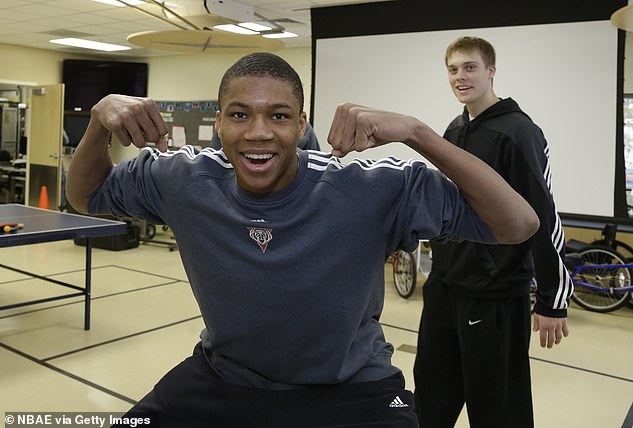 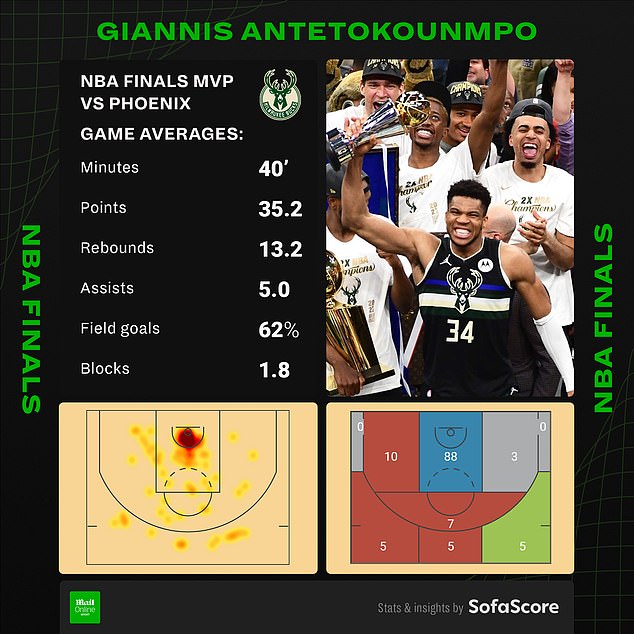 One thing to remember is that even against all the vitriol against his parents, his brothers and himself, Giannis remains proudly Greek.

Having received his full citizenship in 2013, the Bucks star opened himself up to mandatory military service for men aged between 19 and 45.

Nine months of service is typically required, but it is reduced to three months for Greek citizens that permanently live overseas.

And so Giannis, and brother Thanasis, spent six weeks training in the Hellenic Army Basic before getting specialist training for the remainder of their service.

It is estimated that those called up are required to train for a more than seven hours daily.

Duties as part of the service includes preparing food, serving other members, cleaning up the camp and general domestic work. In some instances, those on service can be called from their barracks to help in forest fires or other natural disasters.

And so you get to Wednesday, Giannis finally an NBA champion to win the Bucks’ first championship in 50 years. 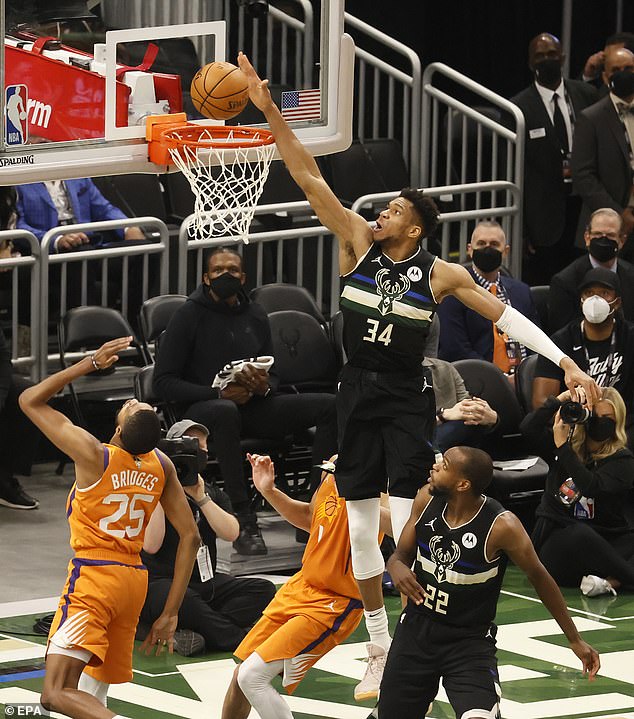 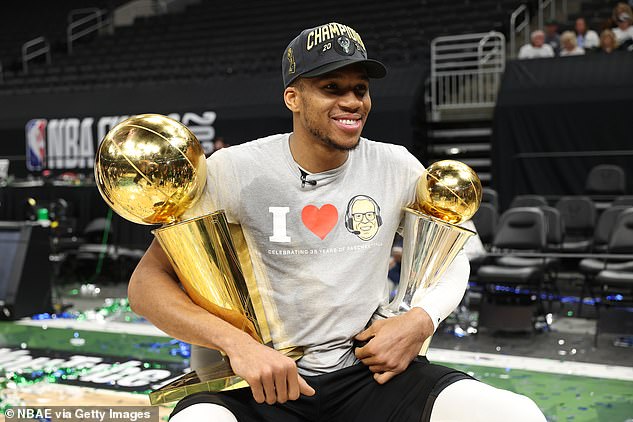 An old tweet of his resurfaced after the Game 6 win over the Phoenix Suns, with the 6ft11′ star declaring in 2014 that he would never leave Milwaukee until he had delivered a championship.

But leave now? No chance. He signed a five-year deal worth $228m – the biggest in NBA history – to commit to Milwaukee and he, a Finals MVP (Most Valuable Player) and a two-time season MVP, is creating his legacy as a Bucks legend.

He’s endearing, not just for his struggle but also for his humility. His tweet about trying a smoothie for the first time in 2014, when he made the big move to America, perfectly summed up the innocence of which makes him so likeable.

Alongside his girlfriend Mariah Riddlesprigger he has a son Liam, with a second child on the way, and both his entire family are comfortably set for life.

The fridge will never have been fuller.