Floorplans of the Miami condo tower have revealed where many the victims lay sleeping or were going about their lives inside their homes on the night of the horror collapse.

Almost all of the victims have now been pulled from the rubble of the Champlain Towers South in Surfside, Florida, while the families of the last few still missing continue to wait in agony for news almost one month on from the disaster.

The remaining section was demolished on July 4 when the site became too dangerous for rescue teams to continue searching for the missing and Tropical Storm was barreling toward south Florida, threatening to topple it entirely.

A total of 97 victims have now been pulled from the rubble, ranging in age from 1 to 92. All but two bodies have been identified while the families of three women are still waiting for news, meaning at least one more body is thought to be buried under the remains of the oceanfront building.

Saturday will mark the one-month anniversary of the tragedy and the recovery effort at the site is winding down, paving the way for investigators to focus on determining what caused the building to collapse and whether or not it could have been prevented.

Using information released by Miami-Dade police along with public records and online appeals, DailyMail.com has revealed where the victims were living at the time of the tragedy which has become one of the deadliest construction disasters in US history. 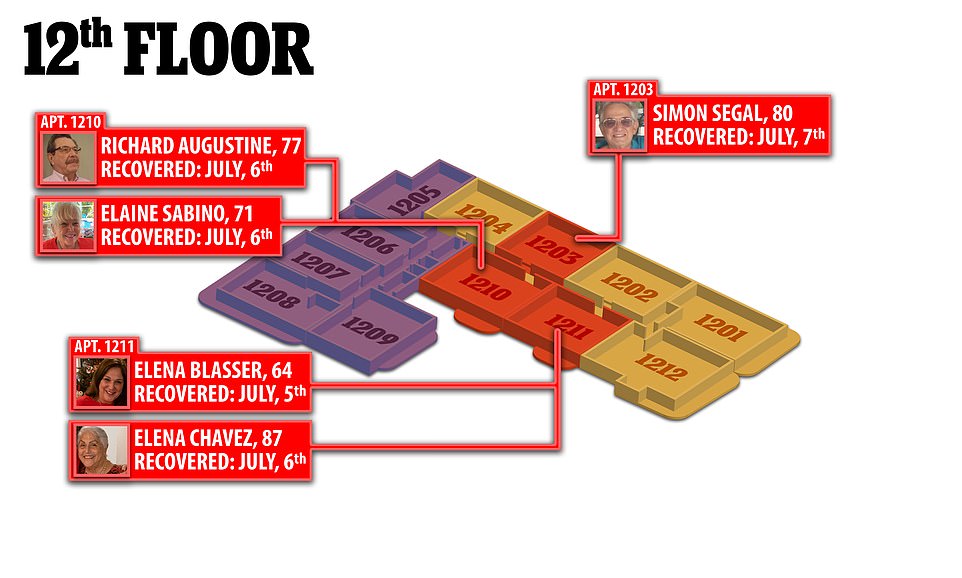 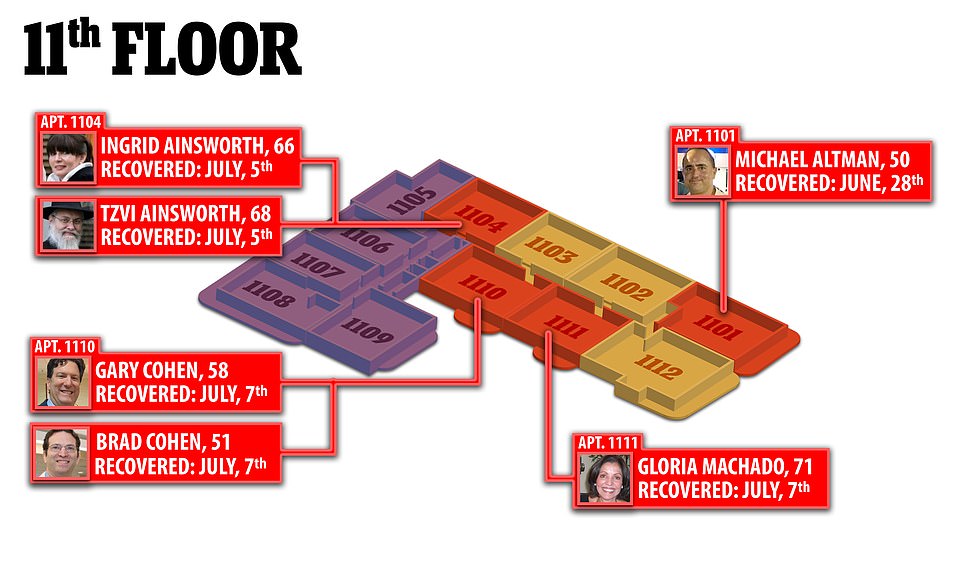 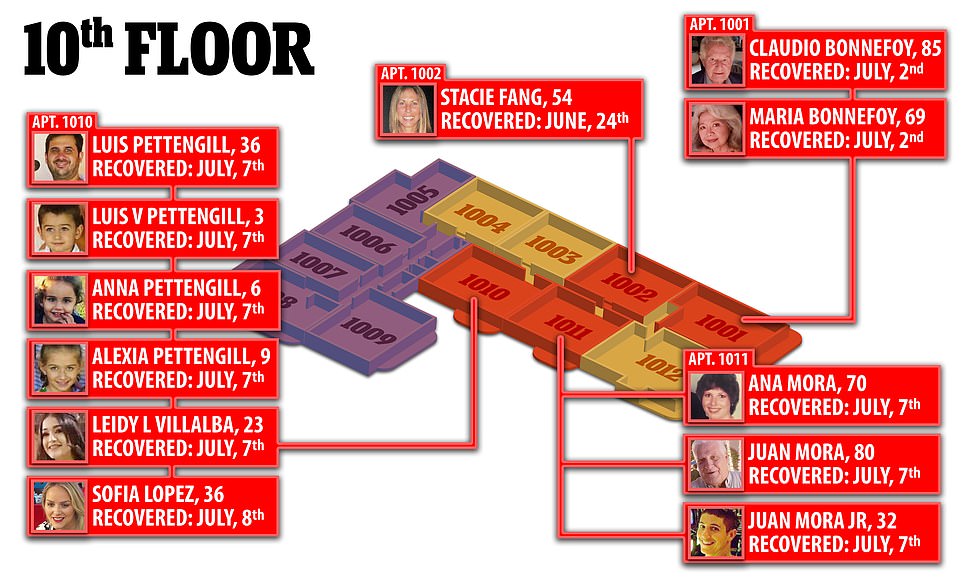 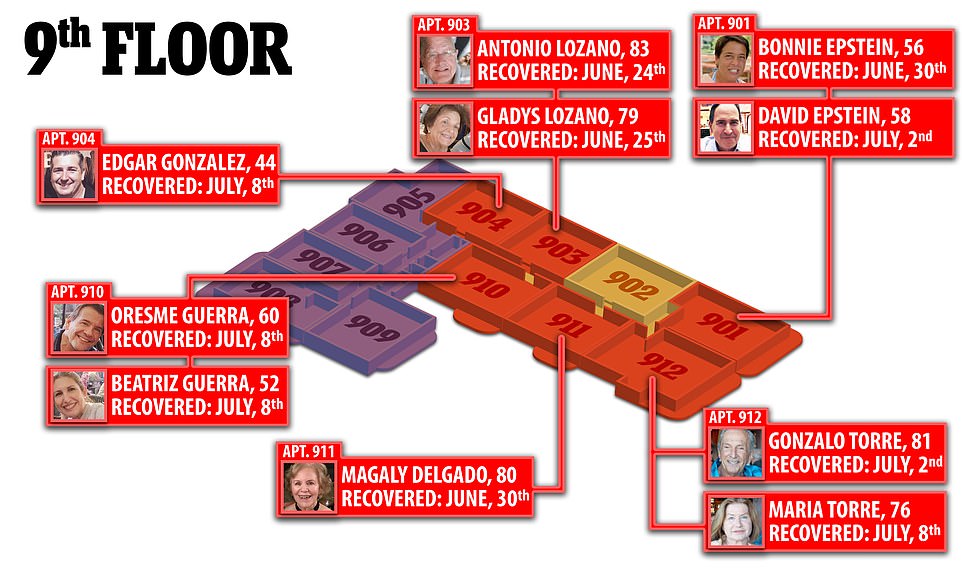 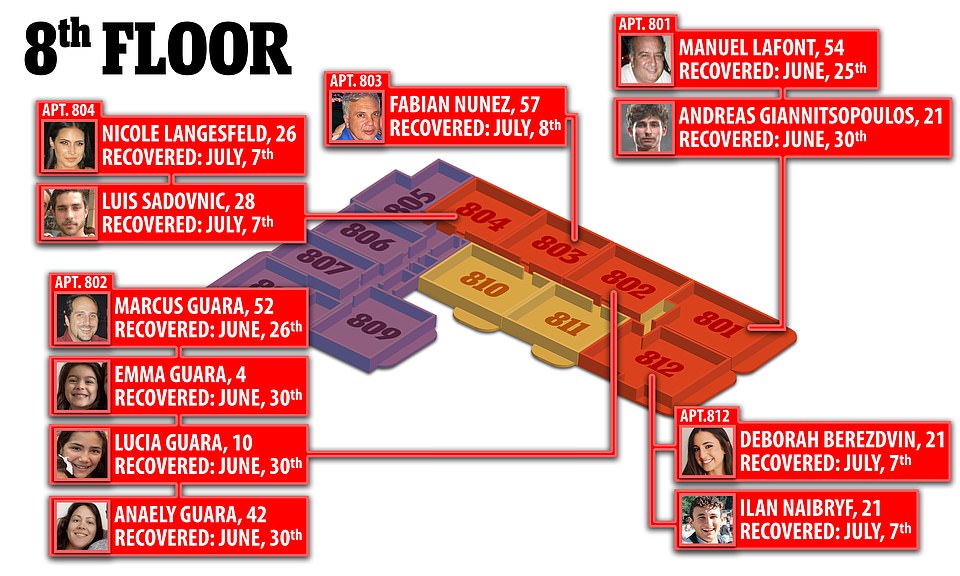 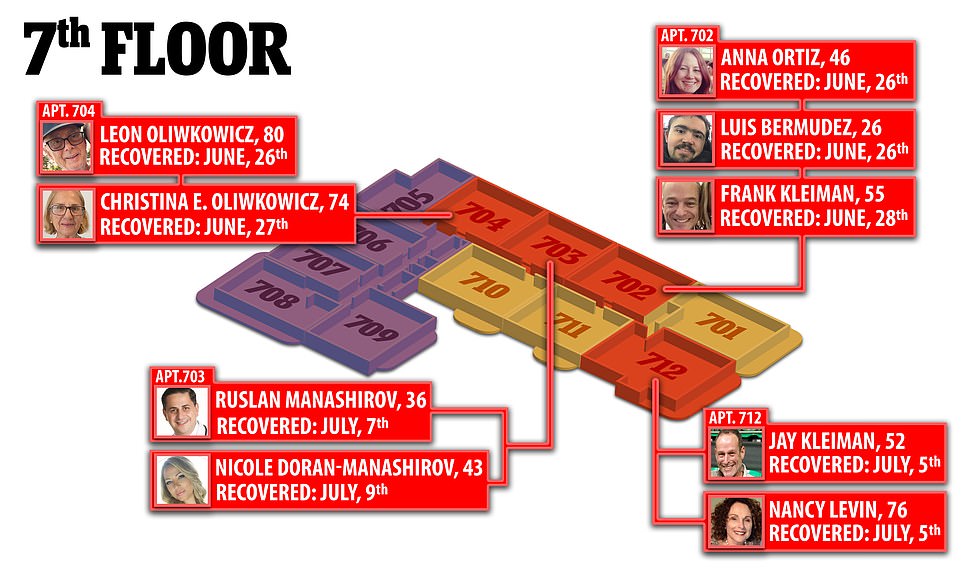 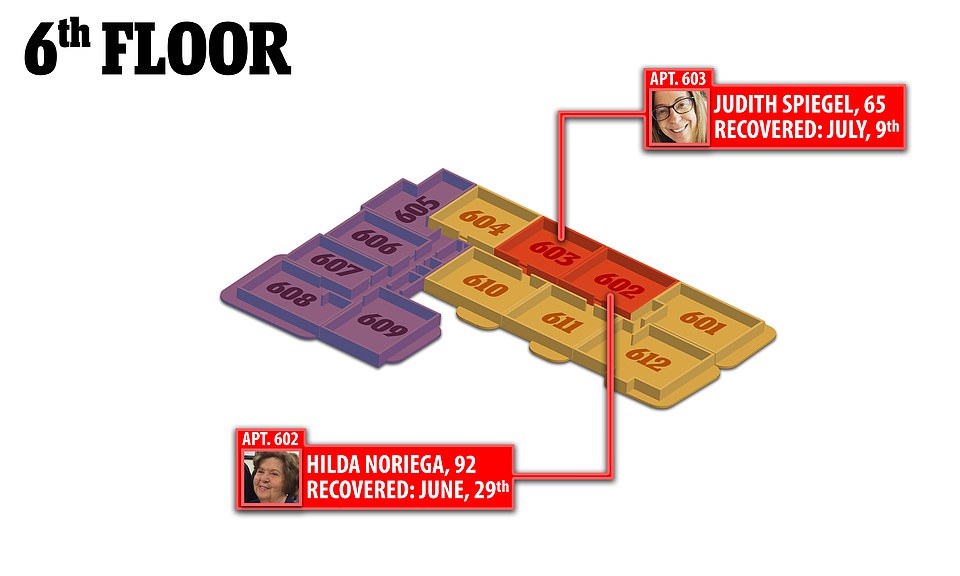 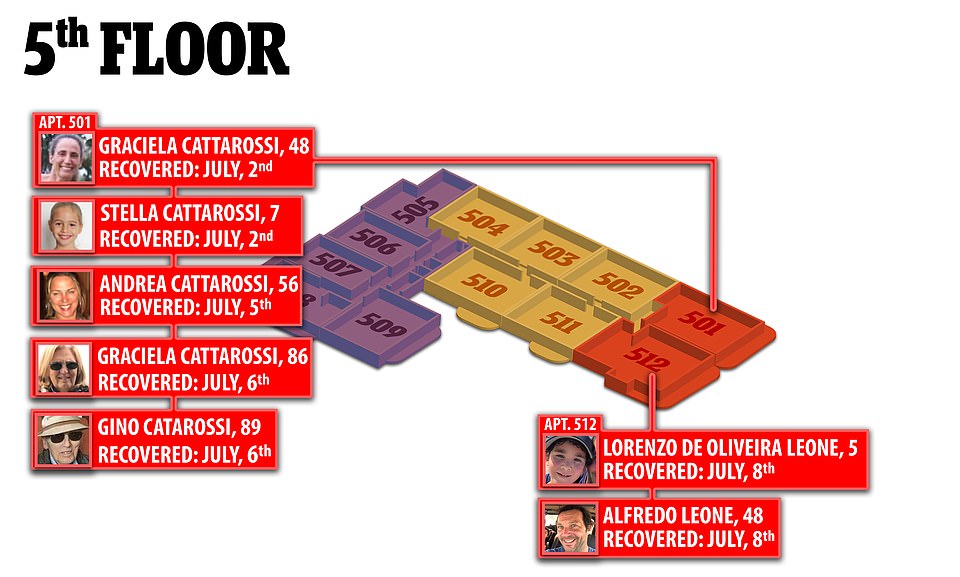 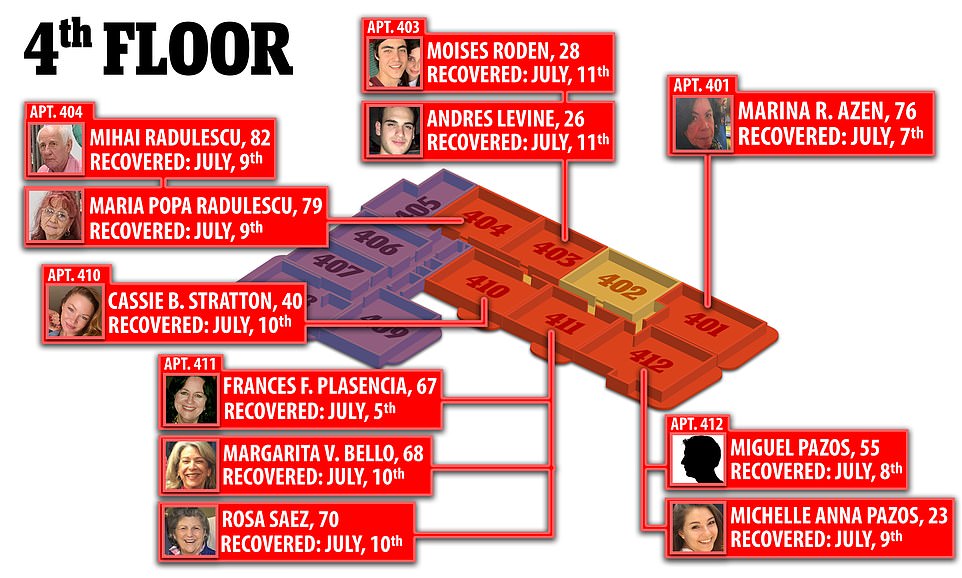 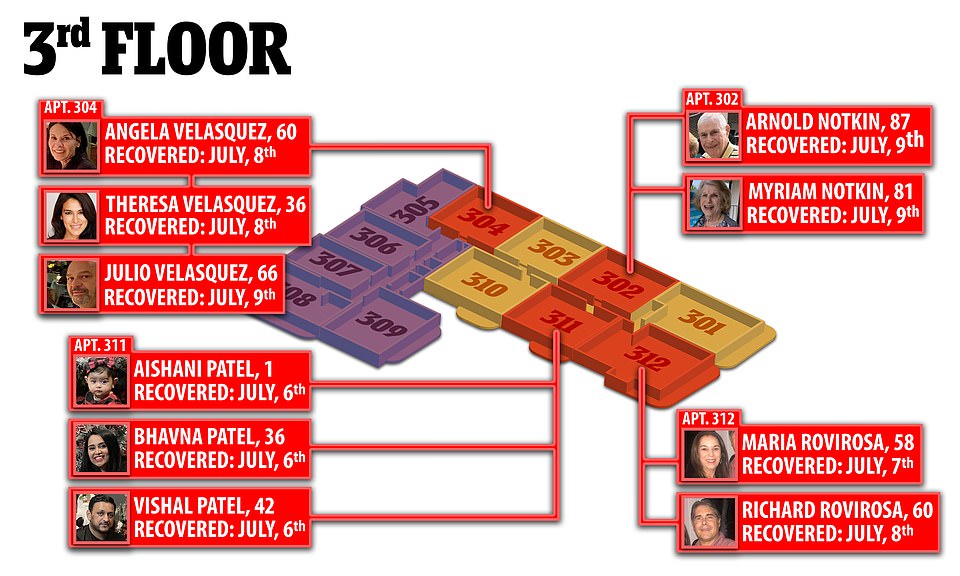 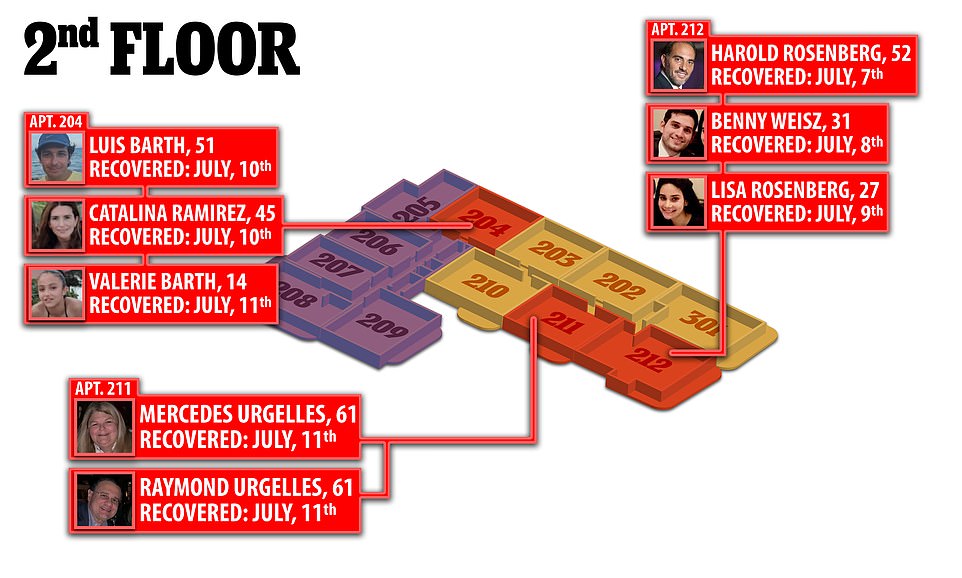 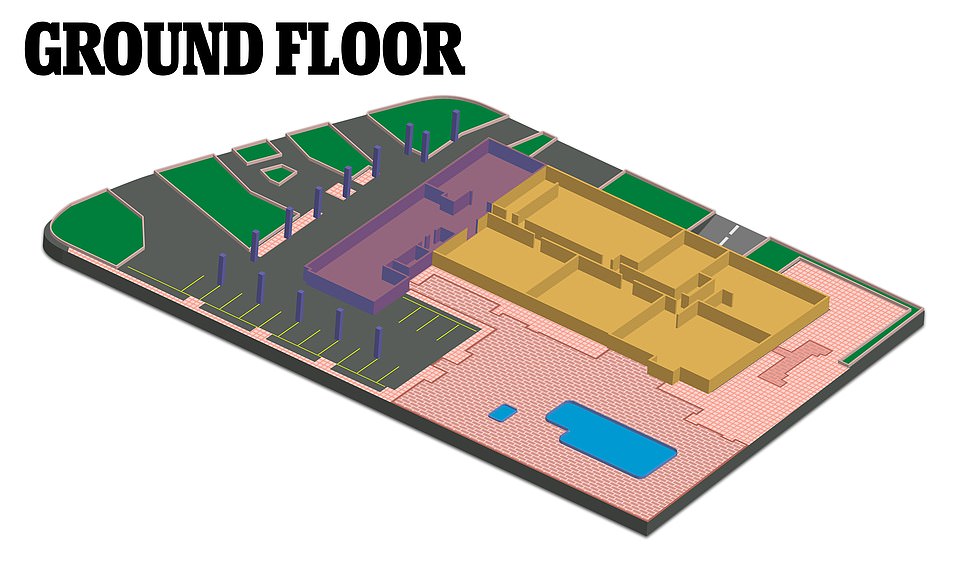 DailyMail.com has compiled floorplans of the Champlain Towers South in Surfside, Florida, using public records and information released by police. They show where many the victims lay sleeping or were going about their lives in their homes when the tower fell

The floorplans reveal the true scale of the tragedy, with victims of all ages spread across the 13 floors of the tower.

The oldest victim was 92-year-old Hilda Noriega who lived in apartment 602.

Noriega, the mother of North Bay Village Police Chief Carlos Noriega, had only recently celebrated her birthday with her son finding a birthday card given to her among the rubble before her body was recovered on June 29.

A Miami firefighter pulled his own seven-year-old daughter from the rubble that same day.

Stella Cattarossi, 7, was sleeping alongside her mom Graciela in the family’s fifth floor apartment 502 when it collapsed. Three of their family members were also killed.

The youngest victim of the tragedy is one-year-old Aishani Patel whose body was recovered on July 6.

Aishani’s pregnant mom Bhavna Patel, a 38-year-old British and US citizen, and her husband Vishal Patel, 42, were also killed when they were inside their third floor apartment when the building fell.

Also on the third floor was Theresa Velasquez, a Los Angeles-based executive for the Live Nation event promotion company.

The 36-year-old was the most recent confirmed victim of the collapse after officials announced her death last week, taking the death toll to 95.

She had flown into Miami to visit her parents who lived in apartment 304. They both also died in the collapse. 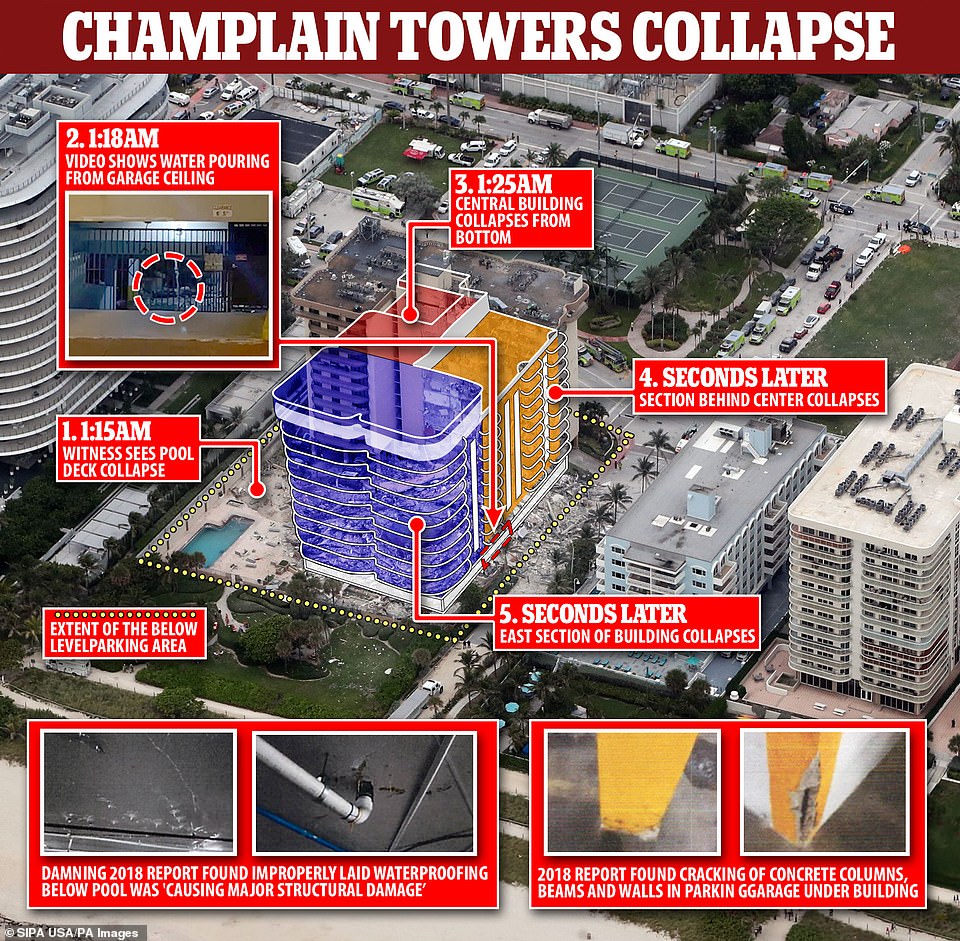 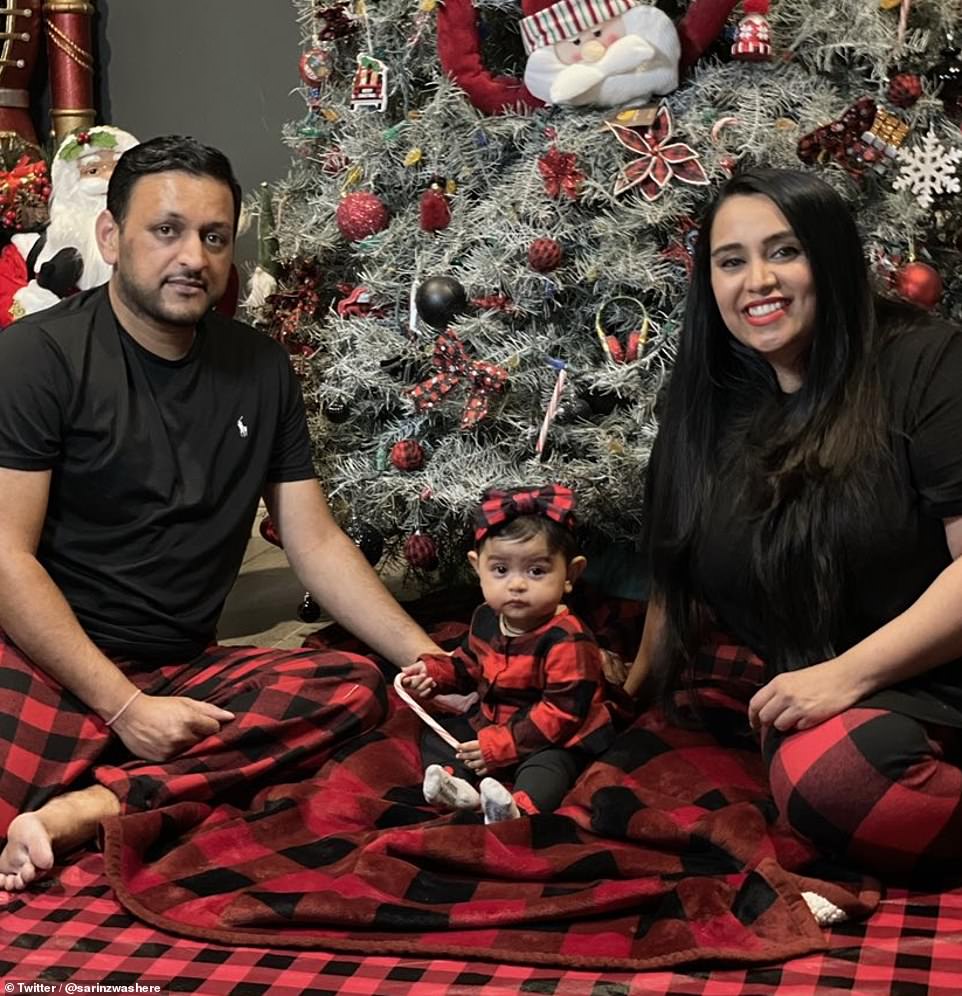 The youngest victim of the tragedy is one-year-old Aishani Patel whose body was recovered on July 6. Aishani’s pregnant mom Bhavna Patel, a 38-year-old British and US citizen, and her husband Vishal Patel, 42, (all pictured together) also died 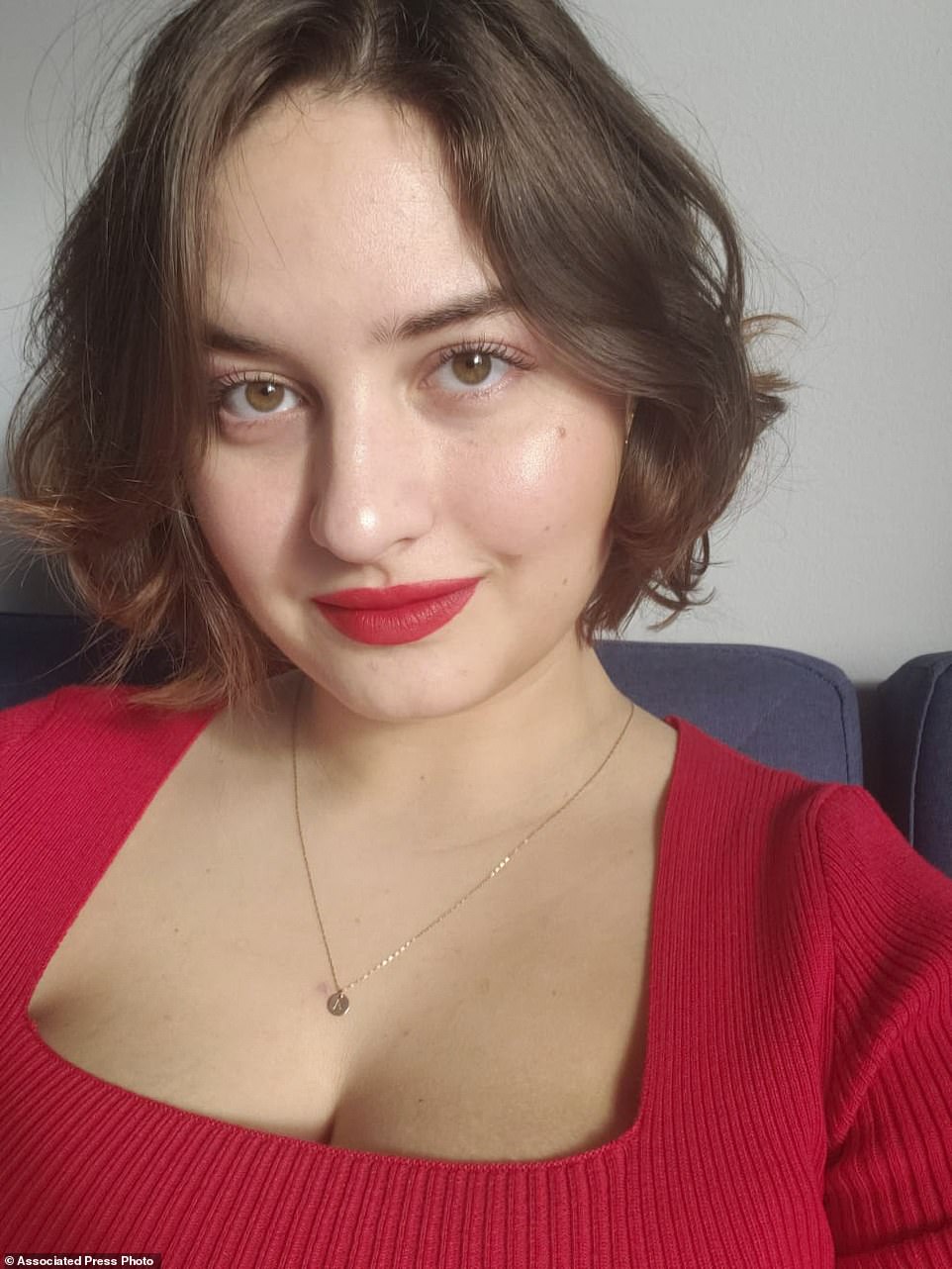 Anastasia Gromova, 24, is also among the last of those missing in the Champlain Towers South collapse. She had just been accepted to a program teaching English to students in Japan and was visiting friends 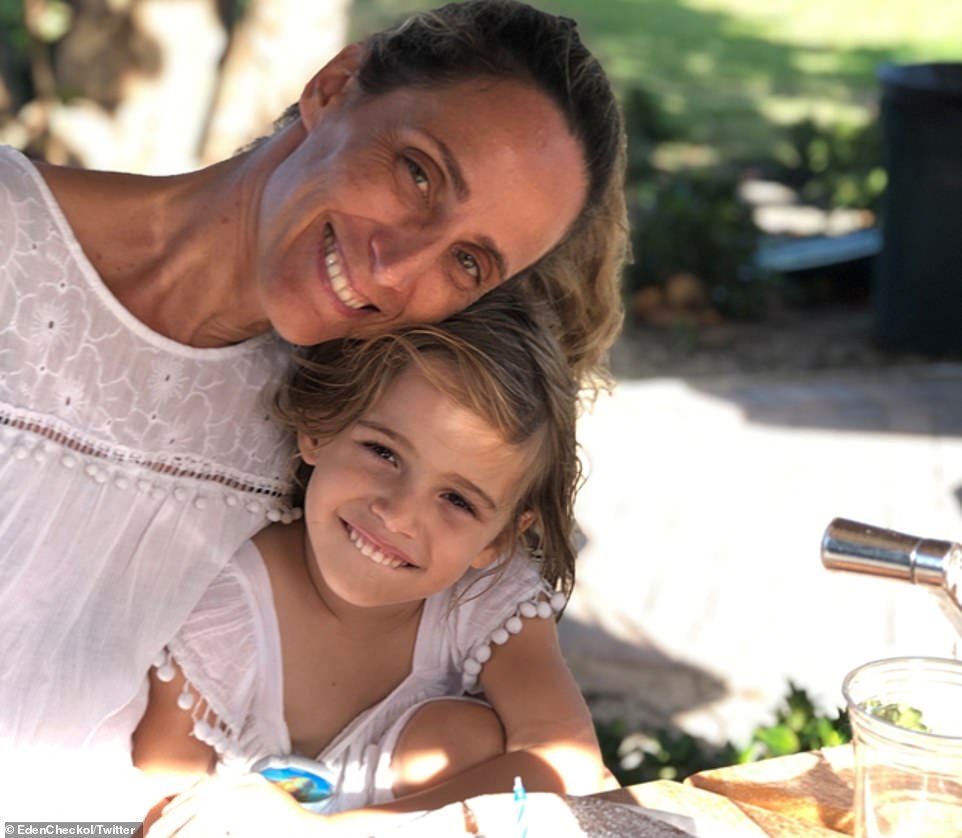 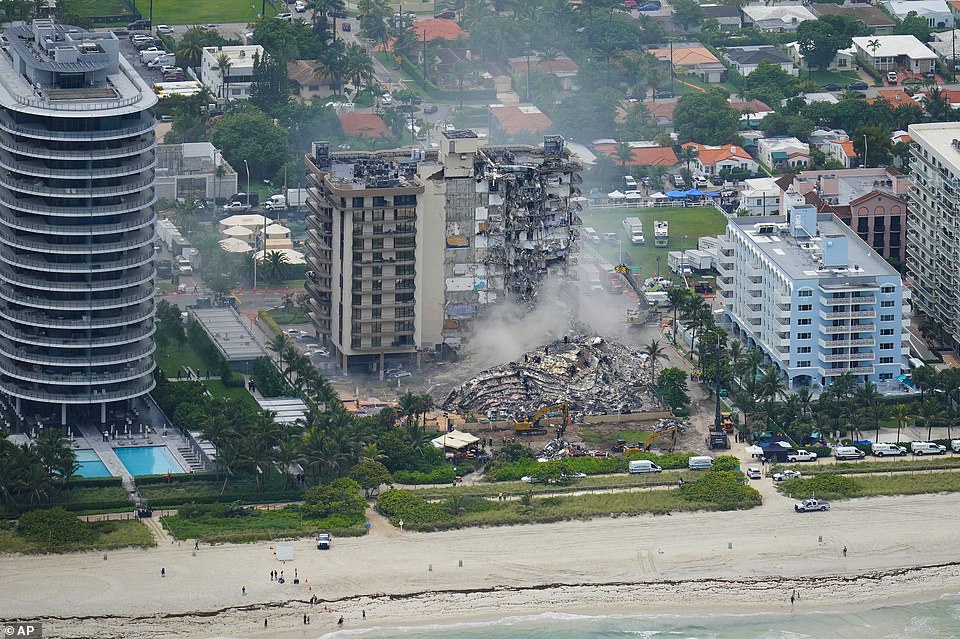 The devastating toll of the Miami condo collapse has become evident as almost all of the victims have now been pulled from the rubble. Rescue workers are seen combing through the rubble on June 25

Other victims include Elaine Lia Sabino, 71, and Richard Augustine, 77, who were staying in the condo they shared on the 12th floor – the lower penthouse level – when the tower collapsed.

The two friends lived in apartment 1210 – the apartment on the end next to the section that remained standing.

Sabino, a flight attendant who worked for US Airways and JetBlue, was found in the rubble on July 6, with Chicago native Augustine found hours later.

They were next-door neighbors to Elena Chavez, 84, and Elena Blasser, 64, a mother and daughter who lived together in apartment 1211.

Blasser’s son Pablo Rodriguez said his mom had told her she was woken by ‘creaking noises’ in the building the night before it collapsed. He said he had thought nothing of it at the time.

Blasser’s body was found on July 5 and her mom’s July 6. The next day another 12th-floor resident was also recovered from the rubble.

Another woman who lived on the top floor is still known to be missing.

Attorney Linda March, 58, was renting a penthouse in the condo after recently moving back to Miami from New York after recovering from COVID-19.

Bunk beds and a desk chair exposed in the side of the building after it partially collapsed were said to belong to the apartment she was staying in. 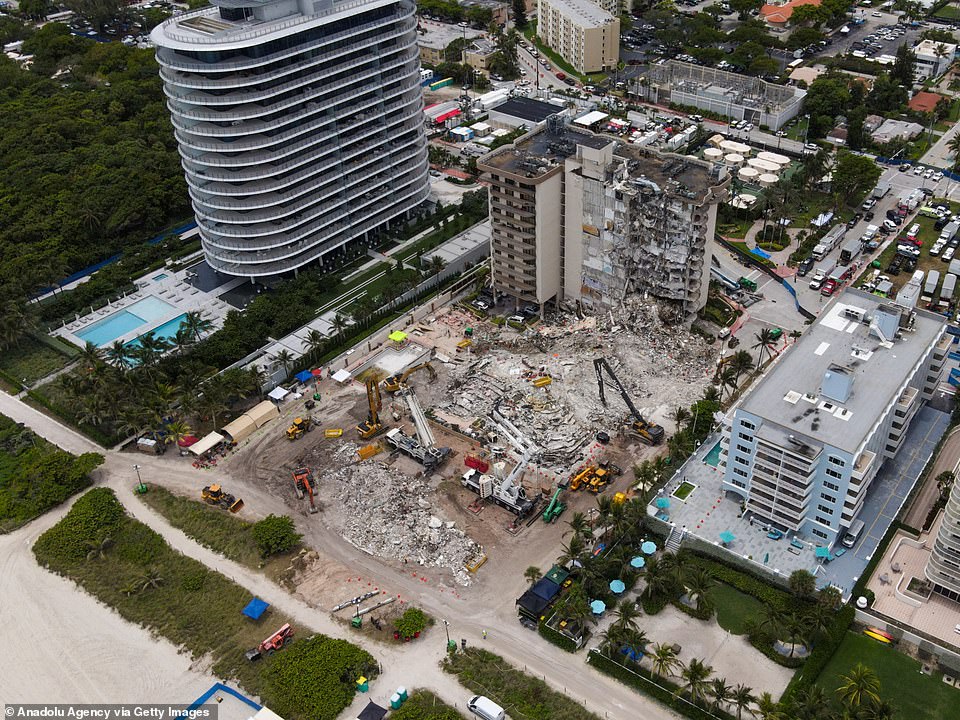 An aerial view of the site during a rescue operation of the Champlain Tower partially collapsed in Surfside, Florida, July 1 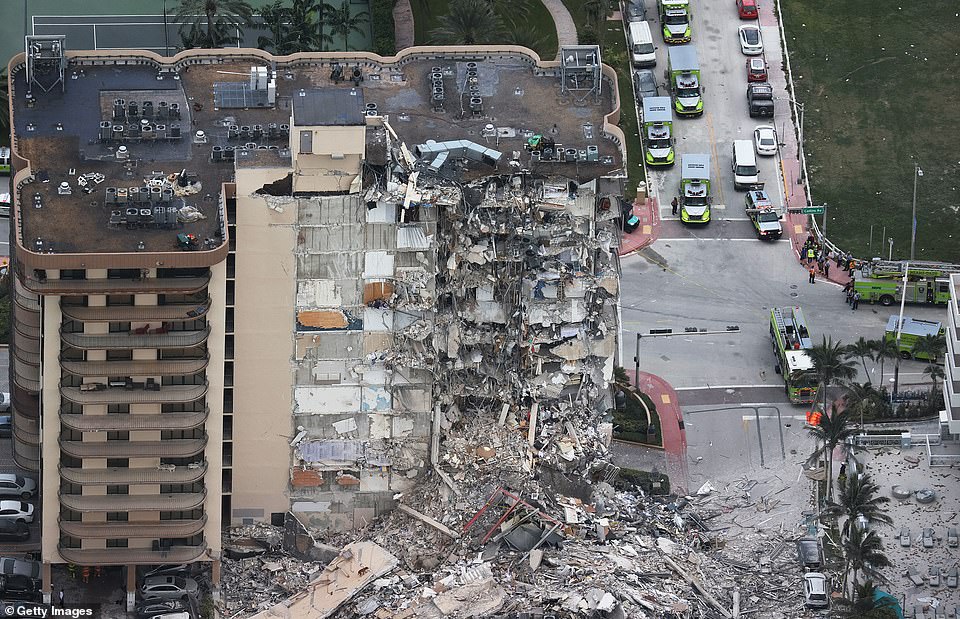 March was close friends with fellow former New Yorker Estelle Hedaya who is also among the last of those still missing, along with Anastasia Gromova.

Hedaya lived on the sixth floor and quickly connected with March when she moved in, a close friend of both women told Associated Press.

Leah Sutton described the two women as ‘friends in life and souls in death’ while Hedaya’s boss Joe Murphy said ‘the weirdest thing about this whole thing is that Estelle’s best friend in the whole building is Linda.’

‘It feels like the wound gets deeper with each day that she is not located,’ friend Dawn Falco said.

‘After falling victim to such a horrendous tragedy, she at least deserves to be placed to rest with dignity.’

Gromova, 24, had just been accepted to a program teaching English to students in Japan and was visiting friends at the Surfside condo before relocating to the country. 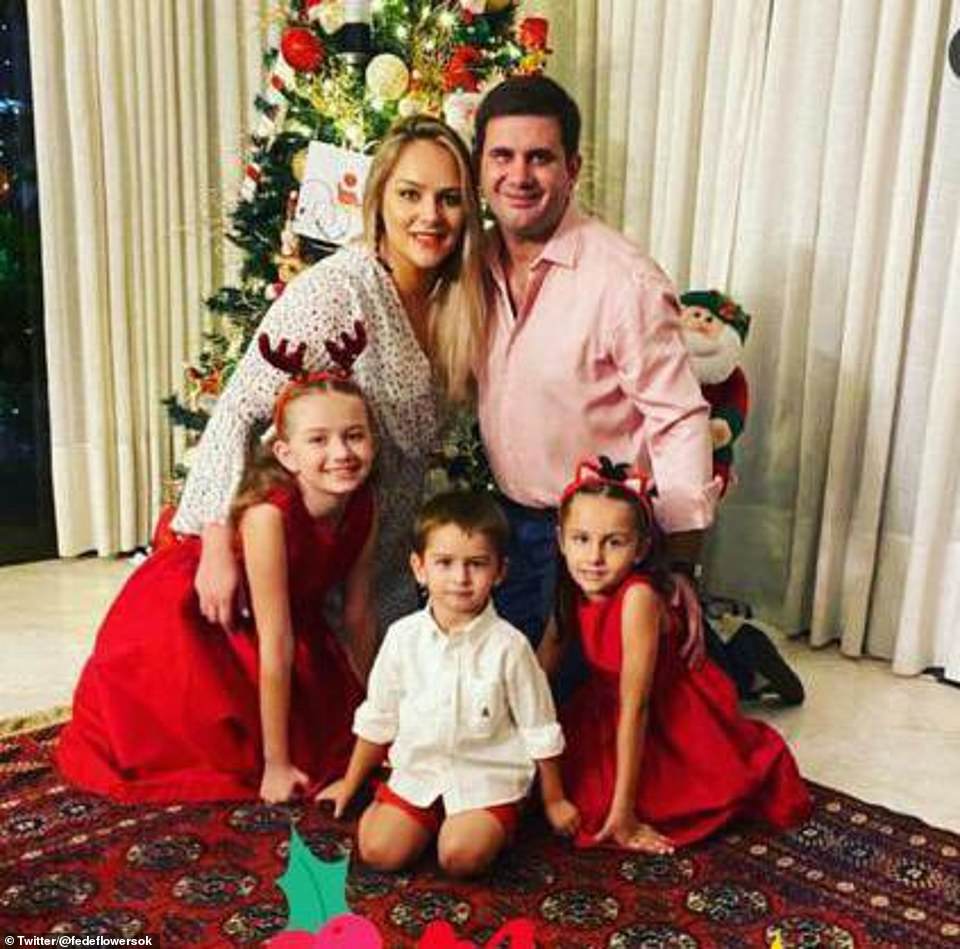 Sophia López Moreira, her husband Luis Pettengill and their three young children were on the 10th floor of the tower. Moreira is the sister of President Mario Abdo Benítez’s wife Silvana 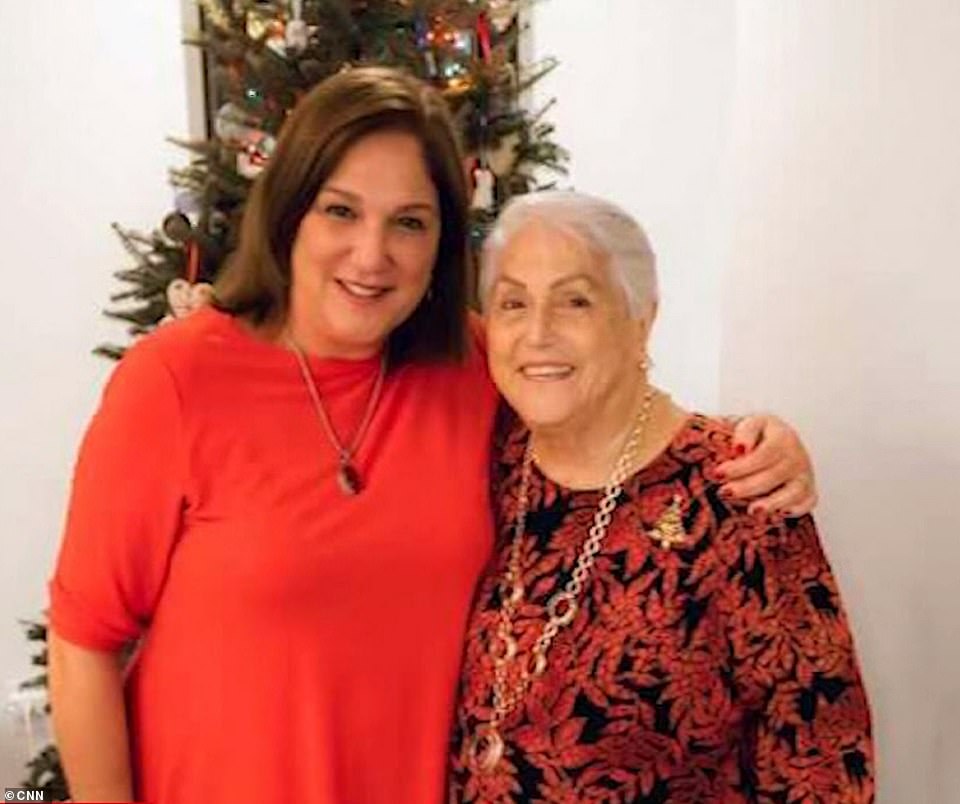 Elena Chavez, 84, and Elena Blasser, 64, are pictured together. The mother and daughter lived together in apartment 1211 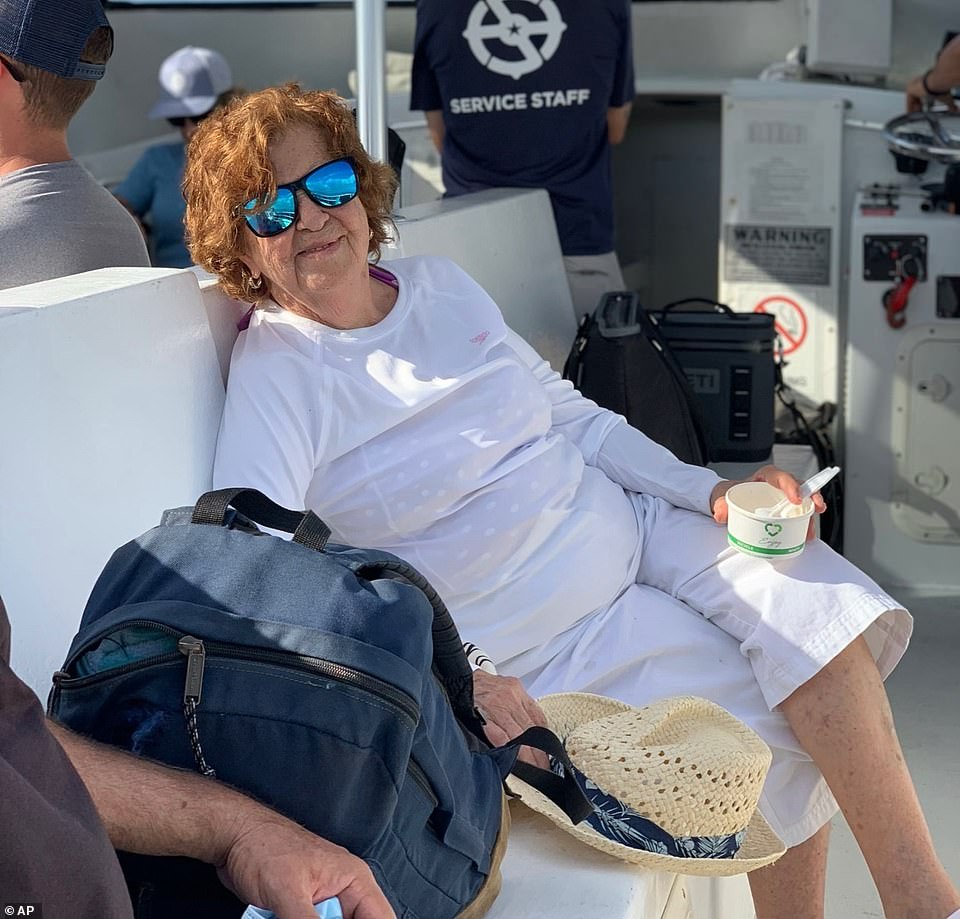 The oldest victim was 92-year-old Hilda Noriega who lived in apartment 602. Noriega, the mother of North Bay Village Police Chief Carlos Noriega, had only recently celebrated her birthday 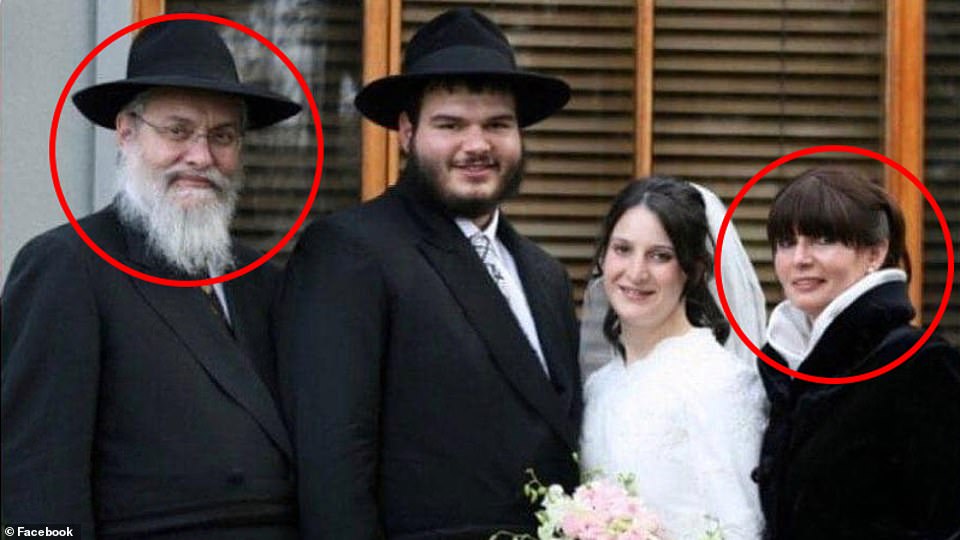 Tzvi (pictured far left) and Ingrid (pictured far right) Ainsworth, members of the Jewish community from Melbourne, lived in an apartment on the 11th floor of the building

Her family said she loved to travel, with her father Sergiy Gromov saying ‘she always wanted to do as much as possible with her life.’

Gromova’s parents and sister, who live in Canada and immediately flew to Florida after the collapse, spoke of their agony as they have watched other victims’ relatives, alongside whom they have waited for weeks, return home after their loved one was identified.

‘We are still waiting,’ her mother, Larysa Gromova, said through tears. ‘It’s too much, it’s taking too long.’

Gromova was on vacation at the tower with 23-year-old Michelle Pazos at her father Miguel’s apartment. Michelle’s body was found 11 days ago while the body of father Miguel Pazos, 55, was found July 8.

For the families of the three women still missing, the recovery efforts feel painfully slow.

Officials said Sunday they are ‘working to dewater the lower levels of the collapse’ and that it is becoming increasingly difficult to identify victims during this phase of the search.

They are relying heavily on the medical examiner and highly technical processes to identify remains.

The first victim was found almost immediately after the collapse in the early hours of June 24.

Stacie Fang, 54, was pulled from the debris and rushed to Aventura Hospital and Medical Center, but died of her injuries soon after.

Fang’s 15-year-old son Jonah Handler survived after being trapped under the frame of his bed. He was seen being rescued from the rubble by emergency crews with the help of a passing dog walker.

Jonah was seen reuniting with his rescuers earlier this month. 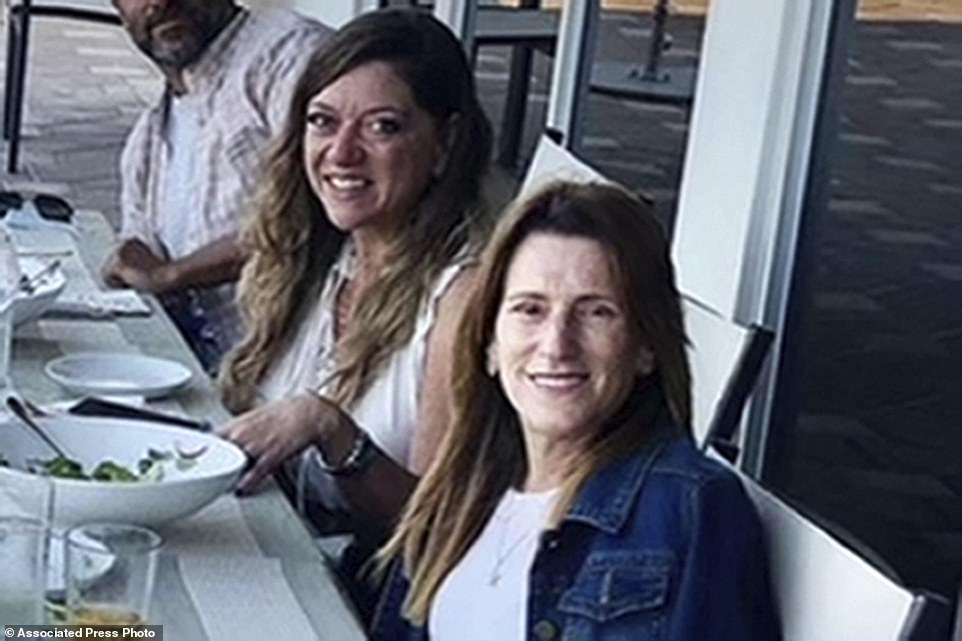 Estelle Hedaya (left) and Linda March (right) are both still missing. They were close friends with each other. Hedaya lived on the sixth floor and March on the top floor

The mother and son lived in apartment 1002 on the 10th floor of the tower.

The family did not live in the building; they were celebrating Luis’ birthday after the family traveled to the US for their COVID-19 vaccines.

The couple split their time between Florida and Australia and were well known among Melbourne’s small Jewish community.

In apartment 903, lived Antonio Lozano, 83, and his wife Gladys Lozano, 79. The Cuban couple were about to celebrate their 59th wedding anniversary on July 21.

With most of the victims inside the building at the time of the collapse now located and rescue teams now close to the bottom of the pile of rubble, the search is nearing completion.

At least 240 people connected to the building were accounted for in the aftermath of the tragedy and more than 26 million pounds (12 million kilograms) of debris and concrete has been removed during the search.

An engineer hired by Surfside to investigate the cause of the collapse said the probe cannot get fully underway until the recovery mission is completed. 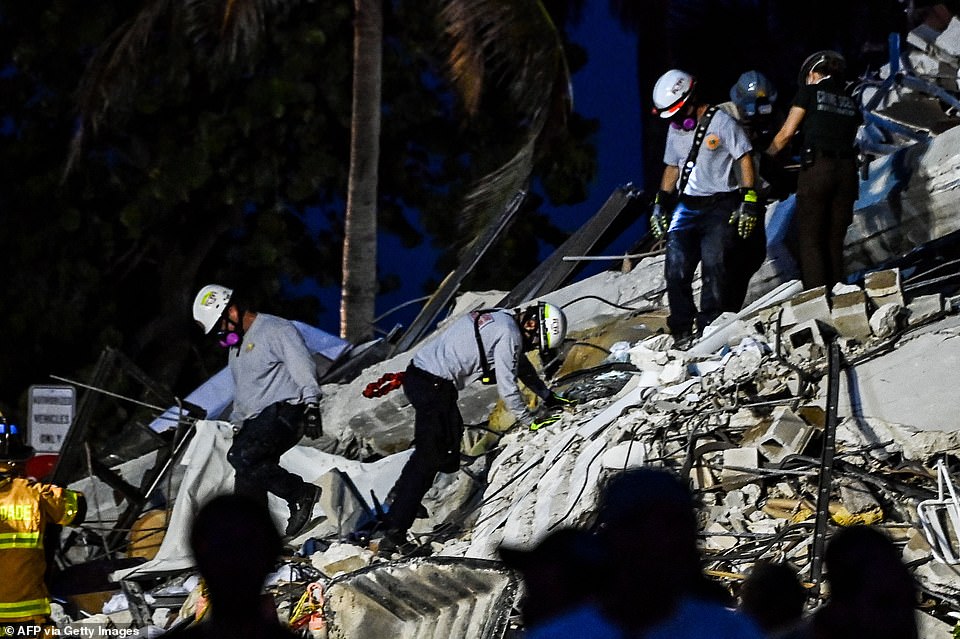 Search and Rescue personnel search in the hours after the collapse on June 24. Now, 97 bodies have been found around one month on 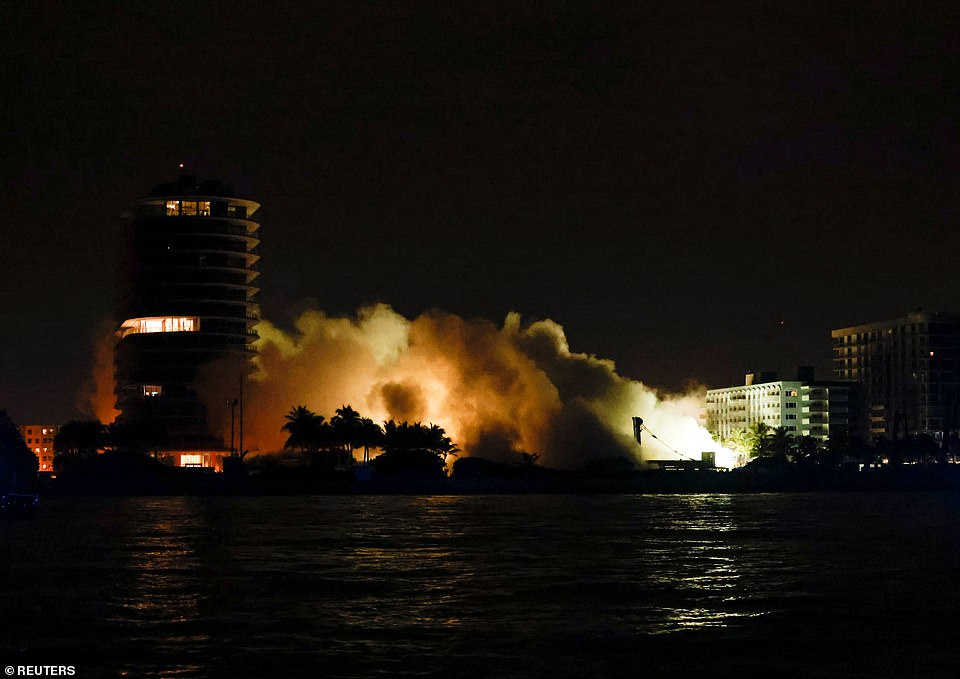 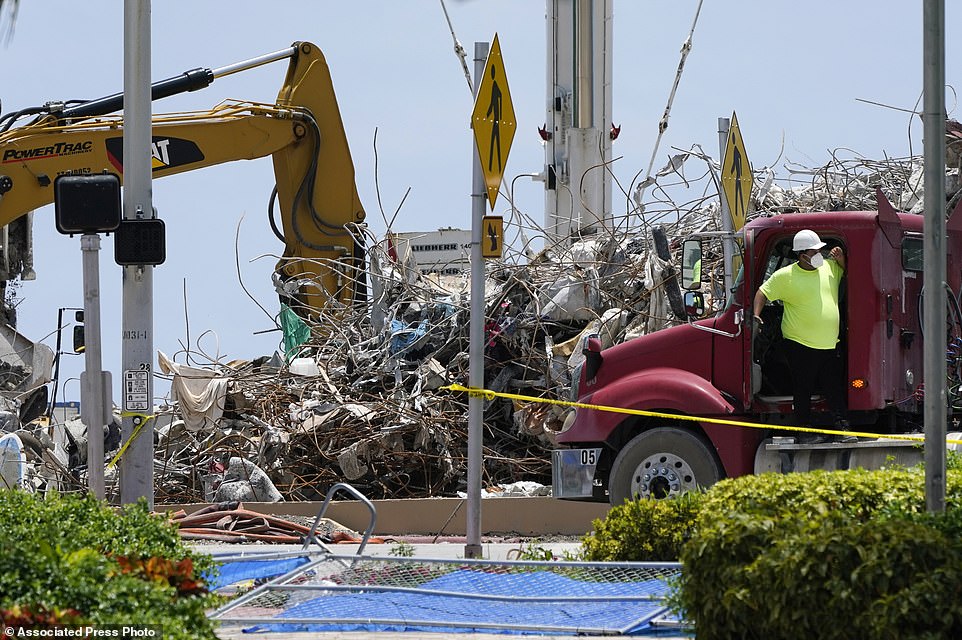 A worker waits to load his truck with debris from the rubble of the Champlain Towers South building, as removal and recovery work continues at the site of the partially collapsed condo building, Wednesday, July 14, 2021, in Surfside, Fla. (AP Photo/Lynne Sladky)

‘Until they do their job, we can’t go in to do samples of materials and take those samples and test them to understand what the various components of the building that came down was,’ he said.

The federal government sent in a team of scientists and engineers from the National Institute of Standards and Technology (NIST) last month as questions continue to mount about what caused the 1980s building to suddenly collapse.

NIST is the federal government agency responsible for leading investigations into building failures and was set up after the 9/11 terrorist attacks.

Witnesses said they saw sections of the pool deck collapse into the garage below before the building fell.

Investigators are also probing whether there was critical failures in the handling of the building’s maintenance.

A consultant engineer warned in a damning October 2018 report that the Champlain Towers South had ‘major structural damage’ to the pool deck area and underground parking garage.

The structural field survey report specifically raised concerns about the pool deck area, in which the waterproofing was failing, and the underground parking garage which was riddled with ‘abundant’ cracking.

It said the tower was in need of numerous repairs around the base of the structure ‘in a timely fashion.’