China’s secret network of prisons for Muslims in a mountainous province can hold more than one million people, reports say.

The Communist government is said to have built 347 compounds that resemble detention camps in Xinjiang in the far west of the country – with space for 1,014,883 prisoners.

The staggering figure counts for one in 25 people in the region but may be a conservative estimate due to the possibility of overcrowding.

An estimated one million people – most of them Uighur Muslims – have been kept confined in re-education camps in Xinjiang in recent years.

China’s Communist government is said to have built 347 compounds that resemble detention camps in Xinjiang in the far west of the country – with space for 1,014,883 prisoners 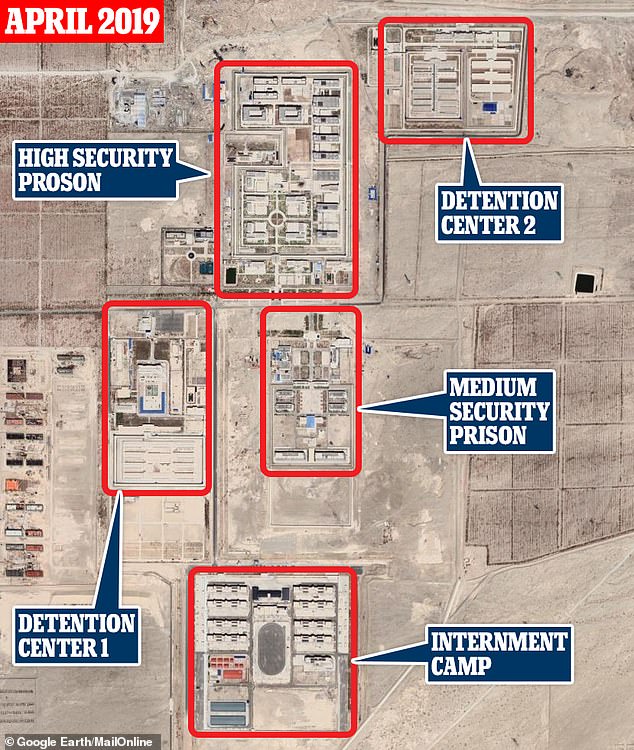 One of the detention centres, seen here from above, to the east of the ancient city of Korla, has expanded rapidly in recent years and can now house over 7,000 prisoners

Chinese authorities have been accused of imposing forced labour, systematic forced birth control, torture and of separating children from their incarcerated parents.

Beijing has flatly rejected the allegations, with officials saying the camps were vocational training centres but are now closed.

The revelations come a day after Dominic Raab suggested Muslim-majority countries ought to show greater concern over abuses faced by the Uighurs in China.

The Foreign Secretary told MPs it seems as if there ‘isn’t quite as much concern’ from them compared to the UK and other western non-Muslim majority countries.

The latest evidence, compiled by BuzzFeed, unveils the scale of China’s mass incarceration programme in Xinjiang that has been ongoing since 2016. 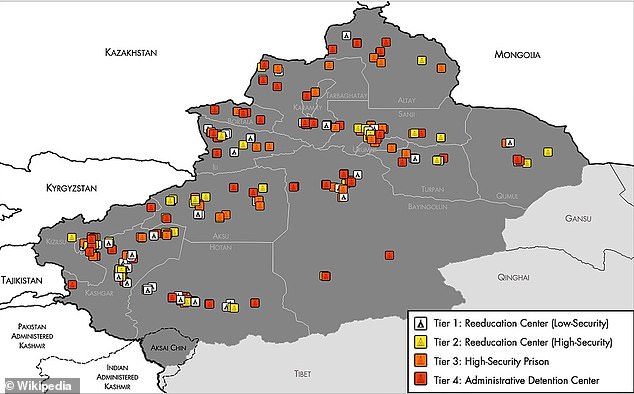 Xinjiang, China’s most far-west state, is said to have 347 compounds that resemble detention camps that were built by the Communist government 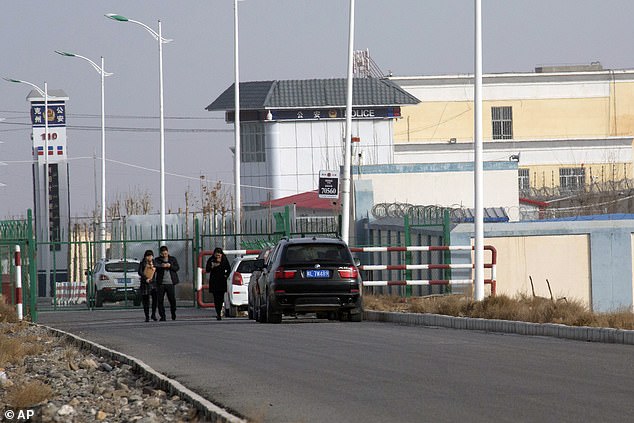 Chinese authorities have been accused of imposing forced labour, systematic forced birth control, torture and of separating children from their incarcerated parents

The news website says the compounds are littered across the region with a camp in most counties and a prison in many larger prefectures.

It reports that while the centres were erected over the course of years, the government took over schools, hospitals and residential buildings as temporary camps.

It is believed this meant the authorities could round up hundreds of thousands of Muslims before the new prisons were complete.

Satellite images as well as first hand accounts were used to spot 268 compounds that were likely prisons by August last year.

But a further 79 location were mapped out across the area following further investigations.

Overall the camps covered an area of more than 206million sq ft, which is one third of the size of Manhattan.

Meanwhile sickening documents – from the Chinese Ministry of Justice in 2010 – outlined the ruthless planning that went into designing the compounds.

They showed how the authorities looked into the size of the bars on the windows and the height of each watchtower.

Between eight and 16 prisoners are crammed into a cell, leaving them with little personal space.

The building work for a centre can take as few as four months and pictures on the builders’ websites show razor wire, interrogation chairs and anti-climb fencing.

Capacity is now believed to stand at around 1.1million people across Xinjiang, but there are likely more because this figure only looks at camps built after 2016.

Most of the Uighurs in the region are found in southern parts, including places such as Kashgar, Hotan, and Kizilsu.

These cities have a larger number of detention camps, according to the report.

It is not clear how many have been locked up in the last three years, but it is believed the figure is rising with each new centres that is erected.

Reports say one is being built and there are four others are expanding to hold more inmates.

When the camps started to sprout they mostly came in Kashgar, Hotan and Aksu where the majority of Muslims were.

Yet the authorities appeared to move swiftly and build camps across the region, even in areas with mostly Han Chinese.

Eysa Imin, a businessman who grew up in a small village outside the ancient of Korla, was detained by police and taken to one of the centres in 2015, and after being released he was taken there again in 2017.

He said the prisoners were forced to sing patriotic anthems such as ‘Without the Communist Party, There Is No New China.’

Cells were kept crowded, with the men barely ever allowed to wash.

On one occasion he and his cellmates – some of whom he recognised from school – were allowed to go outside, to a small balcony.

He was released after a month, which he believes came after he agreed to spy on fellow uighurs in Turkey where he had moved to. He says he never did.

Satellite images show the small detention center where he was held was demolished the following year.

However, he says the government has continued building new facilities at pace, with a sprawling new complex set up in Korla.

In April, backbench MPs approved a House of Commons motion which declared the Uighurs and other minorities are ‘suffering crimes against humanity and genocide’ in Xinjiang.

Mr Raab confirmed the UK Government is continuing to consider what ‘level of representation’ the UK will send to the Winter Olympics in Beijing next year.

Calls for a UK diplomatic boycott of the event were last week endorsed in a non-binding vote in the Commons.