Aberdeen manager Stephen Glass felt his players had responded to the noise created by their returning fans as the Dons rolled back the years in a special European night at PIttodrie.

Lewis Ferguson hit a double and there were goals for Andy Considine, debutant Christian Ramirez and Connor McLennan as Aberdeen beat BK Hacken 5-1 in the first leg of the Europa Conference League second qualifying round.

There were 5,665 fans allowed inside Pittodrie following the easing of Covid restrictions and Glass enjoyed his first match in charge in front of a crowd.

‘If you’re being greedy we wouldn’t have lost a goal but when you ask the players for a performance and they produce that, I don’t think there’s any complaints,’ he said.

‘The players get the reward for the work they have put in for the past five weeks.

‘For myself, managing the team in front of the Aberdeen public felt good, but the response they gave the players was more important to me.

They drove the team on. It was a bit sticky in the first 10 minutes because Hacken are a good team and we were feeling our way a little bit.

‘But the backing we got when it started flowing a bit more, it almost seeped into the players, because good players respond to supporters. A lot of big players have missed it and you could see the response when the noise starting kicking up a bit. 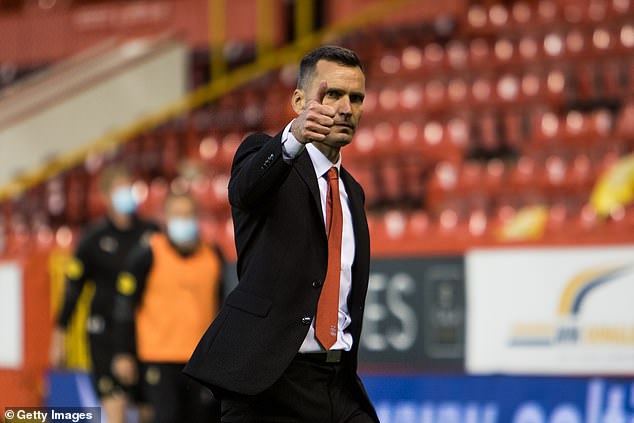 ‘I am delighted for the players and the public that came as well.’

Hacken manager Per Mathias Hogmo refused to give up on the tie ahead of the second leg in Gothenburg next week.

‘We were on our way back into the game at 3-1 but you can’t win games when you give away goals like we did,’ he said.