The surfer from Hawaii, who is so revered in her state that they named a January day after her, took gold by beating Bianca Buitendag of South Africa with Japan’s Amuro Tsuzu taking bronze.

High in the sky: Moore celebrates winning the gold medal of the women’s surfing competition at Tsurigasaki beach in Ichinomiya, Japan 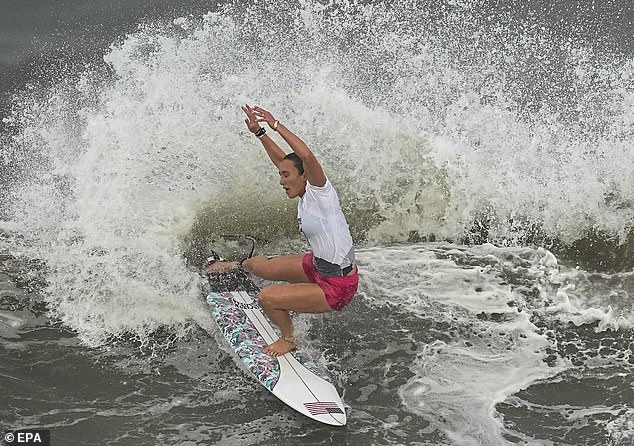 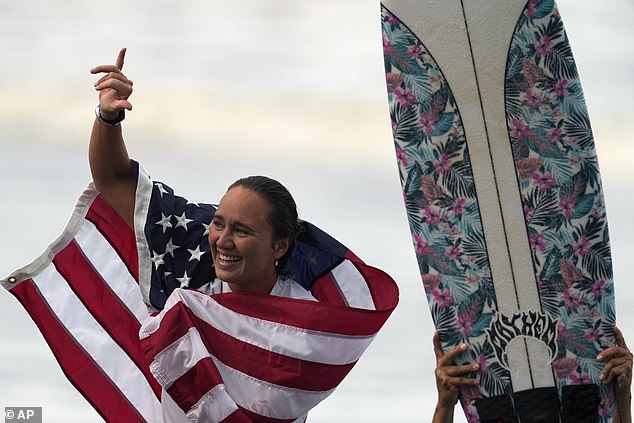 Hawaii’s Carissa Moore, of the United States, celebrates winning the gold medal in the women’s surfing competition at the 2020 Summer Olympics

She took like a fish to the water and began surfing at the age of five sharing the same passion her father Chris showed.

He was also a top local swimmer, won major competitions in Waikiki and is a former lifeguard.

Her sister Cayla is also a professional surfer and the gold medal winner’s stated ambition was to reach Tokyo and compete.

She said: ‘My dad taught me how to surf when I was five years old at Waikiki beach and I was immediately hooked.

‘He loves the ocean and he wanted to share that passion with me.

‘By the time I was 12, we had a more serious conversation, saying, ‘is this something I really want to do?’ 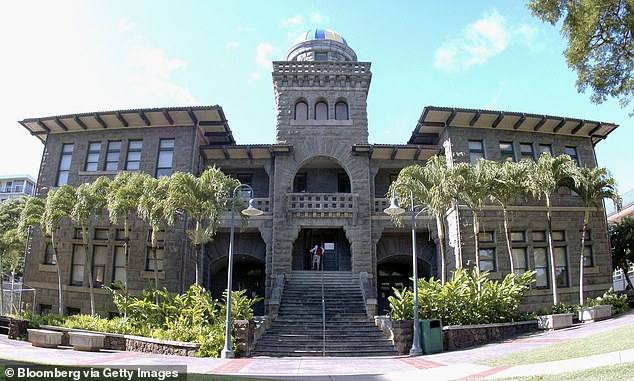 Punahou has had a long, storied presence at the Olympics, with alumni competing on the world’s largest athletic stage throughout its history. Legendary swimmer Warren Kealoha ’25 even represented the United States while still a student, taking home his first gold medal in 1920 – at just 16 – and then doing it again four years later at the Paris Olympics. 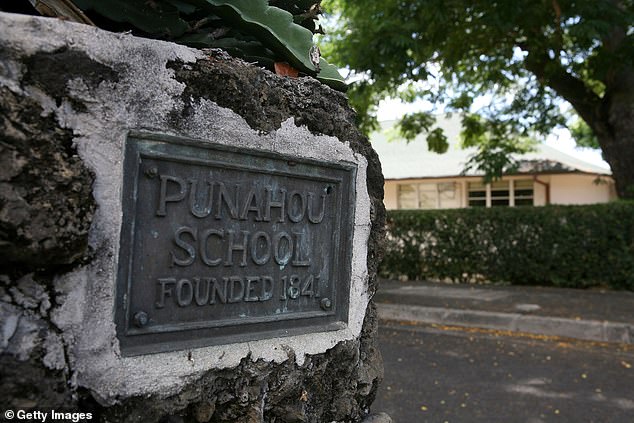 Reigning Olympics champion surfer Carissa Moore shares something in common with former US President Barack Obama and golfer Michelle Wie: all three went to Punahou School. Moore graduated in 2010, Wie in 2007 and 44th President Obama in 1979 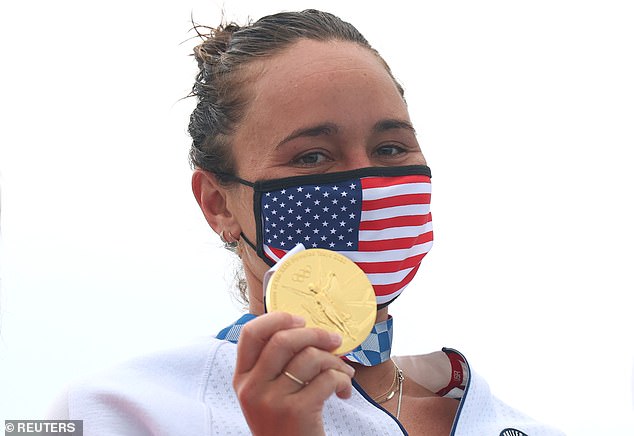 Winning recipe’: Moore struck gold today, being the second alumnus to attend Punahou School and win a gold medal at the Olympics after Warren Kealoha in 1920 at the Paris Olympics 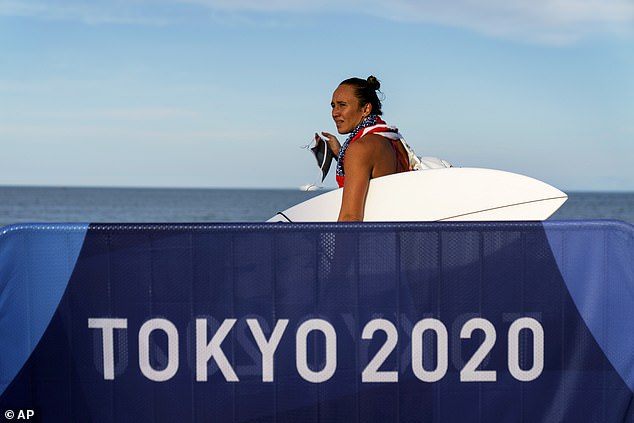 Besides surfing, Moore has another passion: mentoring young people. Through her Moore Aloha nonprofit, Moore has held surfing camps for girls in Hawai’i and in beach communities internationally. Applicants are asked to write a short essay asking how they give back and ‘live aloha.’

‘I knew it was going to be a lot of hard work, but I also knew it would be really fun. The ocean is my happy place.’

She said she spends six months of the year travelling and competing, which she described as ‘living out of a suitcase, chasing waves and following my dream. ‘

Her idols are US tennis player Serena Williams, and Pakistani activist Malala Yousafzai.

In surfing she is a fan of female US surfers Melanie Bartels, Megan Abubo, Rochelle Ballard, Keala Kennelly, and Bethany Hamilton, and male US surfers Kelly Slater and Andy Irons.

She states her philosophy as : ‘Winning a contest is great but the feeling is only temporary. To me, happiness and success aren’t defined by the trophies or accolades but by the small victories and simple joys everyday.’

In 2015 after winning her third world title, the US state of Hawaii declared January 4th to be ‘Carissa Moore Day’.

The previous year, she was inducted into the Surfers Hall of Fame in the US.

Carissa has also been nominated for a Laureus World Sports Award for Action Sportsperson of the Year.

But it hasn’t always been easy for the champion Olympian. 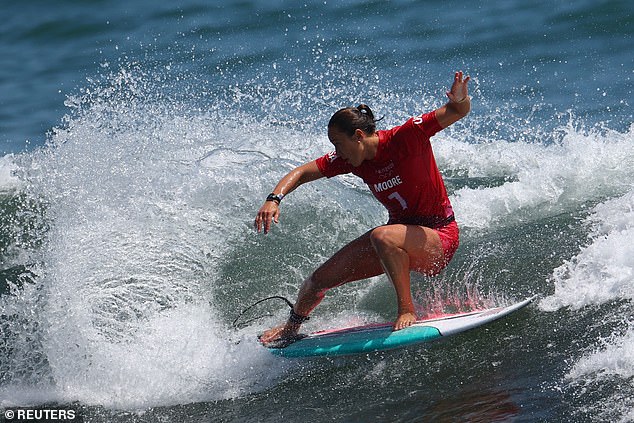 Hawaiian for life: Before coming to Tokyo, Moore told the Waikiki crowd, a neighborhood in Honolulu, that her win wasn’t just about her, but about everyone who’d ever supported her or cheered her on. ‘I’m proud to represent the USA, but most of all Hawai’i,’ Moore said. ‘I’m so excited to go to the Olympics and share the spirit of aloha that Duke shared.’

In 2018 she revealed that she had been struggling to find purpose and motivation for competitive surfing after reaching a low point.

She has also spoken about a long battle with an eating disorder and body image issues that began during high school and took until 2015-16 to overcome.

By September 2019 she said she had rediscovered her ‘happy place’ in the sport.

‘I’ve learned a lot over the past couple of years about what I want personally and professionally – and reassessed my motivation.

‘I’m just feeling a bit more solid about my direction. I’ve always been super goal-oriented, and I feel like I’m more in tune with my goals now.

‘For me, it’s tough when I’m not really feeling my purpose. But now I feel like I’m in a good place.’

Her husband Luke co-owns a Hawaii-based banana smoothie business which often takes them to Japan and she speaks the language.

The couple visited Japan to celebrate the opening of the company’s first international franchise.

‘I studied Japanese in school for six years. I forgot a lot since I graduated but picked up a Japanese for Dummies book and did a little refresh on the plane ride there.

‘A lot of the sentence structure came back fairly quickly but I need some work on re-learning a lot of the vocabulary.

Speaking of her schooldays, during which time she met her husband, she said: ‘I was in high school when Obama got into office and everyone was super excited. 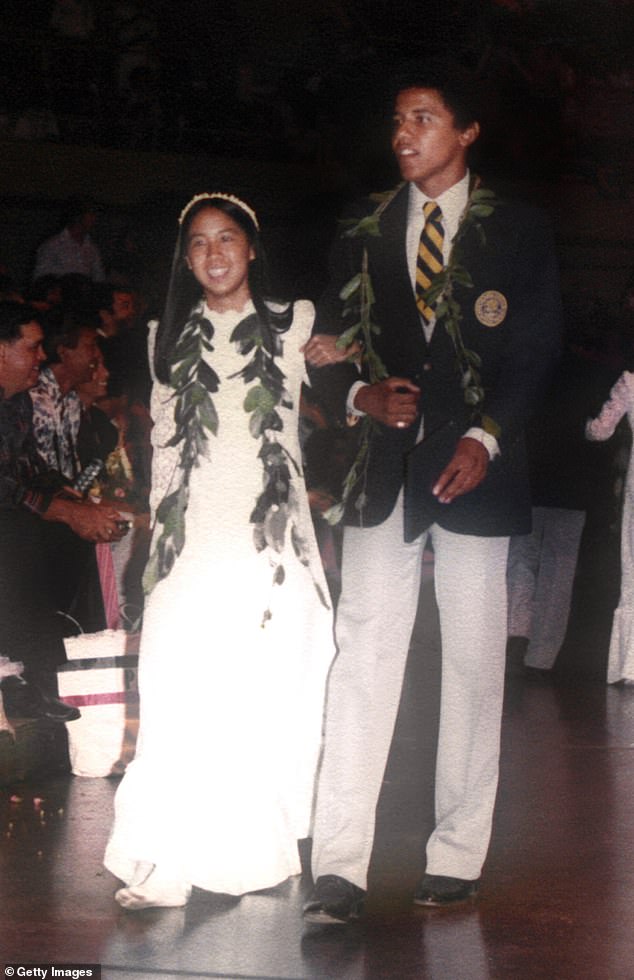 This photo provided by the Punahou School shows Barak ‘Barry’ Obama escorting Laura Kong during the graduation ceremony at Punahou School in May 1979 in Honolulu, Hawaii (Photo by Laura S. L. Kong/Getty Images)

‘It was a very proud moment for my school. I did meet Michelle Wie. She was a senior when I was a freshman and I was really star-struck when she was on campus.

‘I was pretty one track-minded at school though – it was do well in classes so I could surf after school. 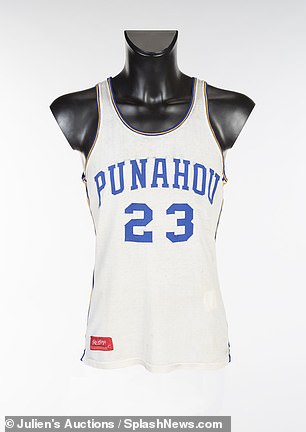 ‘I hope to empower young females through the sport of surfing to be strong, confident and compassionate individuals.’

Carissa said of the gold medal: ‘It’s quite heavy. I’m very proud and honoured. It’s been a crazy couple of days, a little bit of a rollercoaster of emotions just trying to figure out the break, find my rhythm, learning how to trust myself without my family here.

She said she wanted to pay tribute to Duke Kahanamoku, who dreamt of getting surfing to the Olympic Games. He won three swimming Olympic golds medals for the US and died in1968, without seeing his dream of surfing at the games fulfilled.

‘Before I came here, I actually watched a documentary of Duke, just learning about his life, how he lived with the aloha spirit, and how many people he touched.

‘This was his dream, to have surfing in the Olympics. I hope I made him and my people proud.

‘I hope I can use this platform to just share some positivity and love.’

‘I can’t wait to come home and celebrate.’ 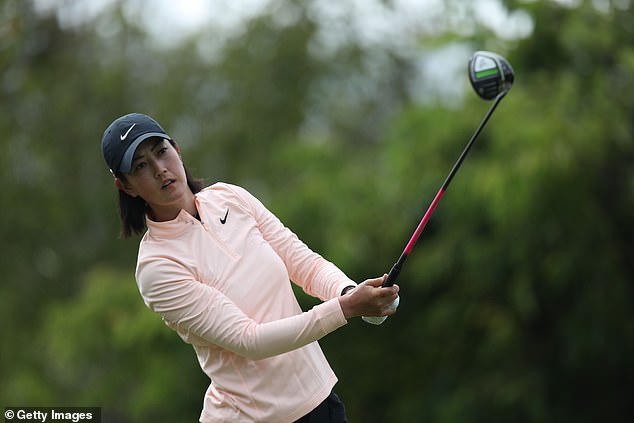 Moore is only four years younger than 2014 U.S. Women’s Open champion Michelle Wie, who was a senior when Moore was a freshman at Punahou School.