They do self-deprecating wit quite well around these parts. It’s almost an essential trait to possess as a Mancunian. As well as enjoying your football.

So Pep Guardiola, who has always made clear that he understands the culture and history of Manchester City, ought to have expected what arrived from the vocal safe standing area of a packed Etihad Stadium seconds after kick-off.

They sing about having enjoyed trips to Rotterdam, Monaco, Napoli and Rome – a nod to European travels – before ending the ditty by referencing the main source of criticism by their detractors. And, it turned out in midweek, their manager too.

‘We still get blue empty seats. Empty seats at home.’ City’s support always produce a rendition of it but Saturday’s came with an extra bit of feeling.

Guardiola moved to clarify his comments on the eve of this draw with Southampton and his reasoning actually bore out on an afternoon during which the defending champions toiled. Ralph Hasenhuttl’s team were excellent, as Guardiola predicted.

But, effectively, City’s manager found himself in a position of pleading for fans to turn up and then his own team did not. Not a great conclusion to a difficult week for those around the club – however overblown some may feel this situation became.

‘I didn’t say anything wrong after Leipzig,’ Guardiola maintained. ‘I said I needed the support. I didn’t complain about how many come or don’t come. I’ve never done this in my life. 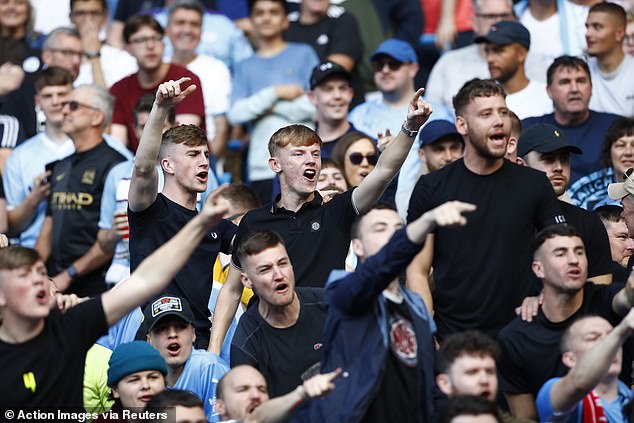 ‘When the game is not good I feel bad for the fans. They come to see a show, to enjoy. I feel a bit guilty when we don’t play good. They were awesome in the last minutes. It’s difficult to ask of them when we are not good.’

The general feeling among some fans was that Guardiola’s point came across as ill-judged, although there was acceptance that it was made minutes after a pulsating Champions League night as adrenaline pumped.

There was, however, disappointment that general secretary of the official supporters’ club, Kevin Parker, found himself namechecked during Friday’s press duties which ultimately personalised the issue.

The noise surrounding City’s fanbase is more nuanced than merely any sort of dispassion, with ticketing and transferring stubs having already represented real problems this season. 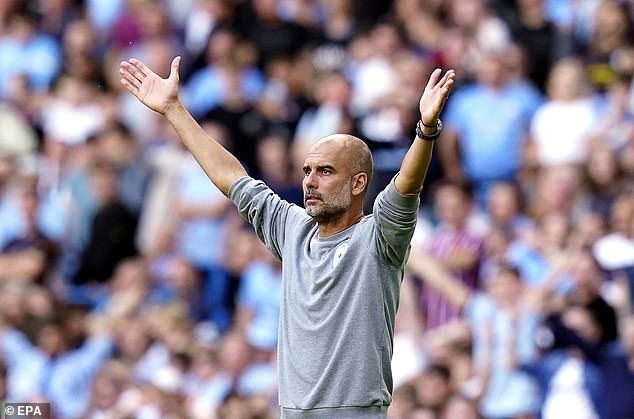 The Spaniard’s comments, after the RB Leipzig win in Europe, were criticised by fan groups

There is also a move for the formation of an independent supporters’ trust. Fans want more direct communication with executives as well. We cannot always get what we want, of course.

Ultimately, nobody here wants a row with the club’s most successful boss, who is one victory away from equalling Les McDowall’s record for most wins at the helm.

‘We’ve got Guardiola,’ – to the tune of The Dave Clark Five’s Glad All Over – rang out early doors and had been played by the Paul Hand Band on stage at City Square beforehand.

Equally, there remains some confusion as to why the topic of attendance was brought up at all given that City occupy more than 96 per cent of their ground for Premier League matches. This was no different. 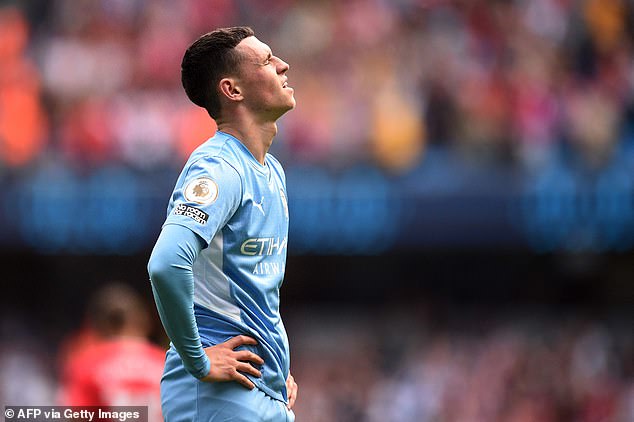 But it was City’s players who didn’t turn up, with no shots at all until a late Phil Foden header

Interestingly, club legend Mike Summerbee had chosen to dedicate a section of his programme notes to the atmosphere.

‘When I was doing my column and we were playing behind closed doors, I asked you all to make the Etihad noisy and show your appreciation for this magnificent team on your return,’ Summerbee wrote.

‘In midweek – and against Arsenal and Norwich – you did exactly that. We’ve had an incredible atmosphere for all our home games you can see our players thrive in it.’

They should have thrived again but did not, Phil Foden’s late header their only attempt on goal. That is not the fault of the 52,698 inside this stadium.