By Ross Ibbetson For Mailonline

The Kremlin on Wednesday lashed out the ‘unprecedented information aggression’ by the Google-owned video platform and warned it could seek to partially or fully restrict access to YouTube if the ban was not revoked.

Russian state communications regulator Roskomnadzor also warned that Google faces a fine of up to 1 million rubles (£10,000) if it fails to comply.

RT DE had received a ‘strike’ on an upload but sought to bypass the restriction by uploading it to a second German RT channel called ‘The Missing Part’. This led to both channels being ‘terminated’, YouTube said in a statement.

The content of the video was not immediately clear, however, recent uploads by RT DE have included an expert who claimed that the ‘Pfizer vaccine kills more people than it saves.’

Russian President Vladimir Putin during a meeting with Turkish President Recep Tayyip Erdogan on Wednesday. The Kremlin has used threats to try and force US social media companies to comply with its demands 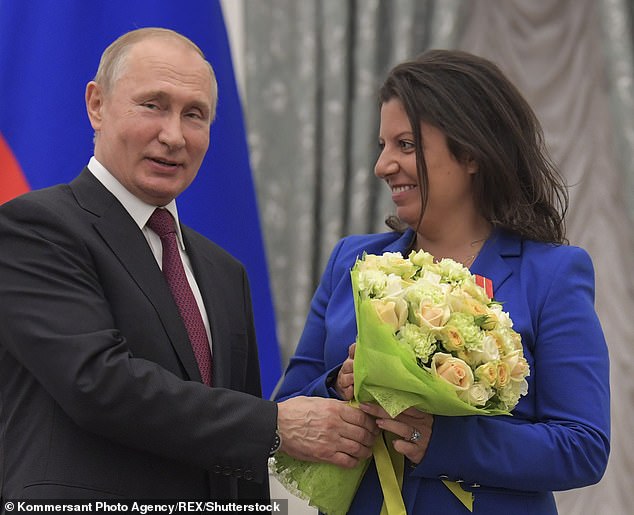 Margarita Simonyan (pictured with Putin in May, 2019), editor-in-chief of RT, tweeted: ‘This is a real media war declared by the state of Germany to the state of Russia.’

Margarita Simonyan, editor-in-chief of RT, tweeted: ‘This is a real media war declared by the state of Germany to the state of Russia.’

She appealed for Moscow to respond by banning German state broadcasters in Russia.

The German government has insisted it had nothing to do with YouTube’s decision.

Government spokesman Steffen Seibert called the idea that Berlin was working in tandem with YouTube a ‘conspiracy theory.’

‘There has been no state attack on the Russian press,’ he added.

The channels of Sky News Australia, Talkradio in the UK, the US Senator Rand Paul and the Romanian Senate have all been temporarily blocked for broadcasts which YouTube said contradicted guidance from the World Health Organisation (WHO).

YouTube has removed more than 130,000 videos since last year for violating its Covid-19 vaccine policies.

The Kremlin said it may have to force YouTube to comply with Russian law, saying there could be zero tolerance for breaches.

‘Of course there are signs that the laws of the Russian Federation have been broken, broken quite blatantly, because of course this involves censorship and obstructing the spread of information by the media,’ Kremlin spokesperson Dmitry Peskov told reporters. 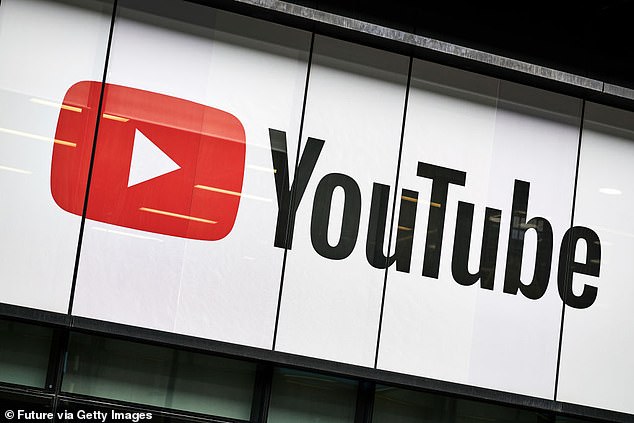 Google-owned YouTube has removed more than 130,000 videos since last year for violating its Covid-19 vaccine policies

The foreign ministry said Russian authorities had been approached with ‘a proposal to develop and take retaliatory measures against the YouTube hosting service and the German media.’

Moscow has increased pressure on foreign tech firms in the past year, fining social media companies for failing to delete content Russia deems illegal and punitively slowing down the speed of Twitter.

That pressure led Google and Apple to remove an anti-government tactical voting app from their stores on the first day of a parliamentary election earlier this month, Kremlin critics said.