John Motson wasn’t entirely sure whether the free-kick David Beckham had just curled so magnificently into the net had actually delivered England to the World Cup.

But such was the overpowering emotion and the importance of the moment to the nation, he felt compelled to go for it anyway.

‘Beckham…. Yes! Yes! He’s done it, David Beckham! Fantastic, it’s 2-2 and England may still be going to the World Cup,’ screamed the BBC’s voice of football as people leapt jubilantly from sofas up and down the land.

Beckham had indeed done it but in those pre-smartphone days, very few hugging friends, family and strangers alike in the stands at Old Trafford knew for certain8 if the goal meant anything at all. 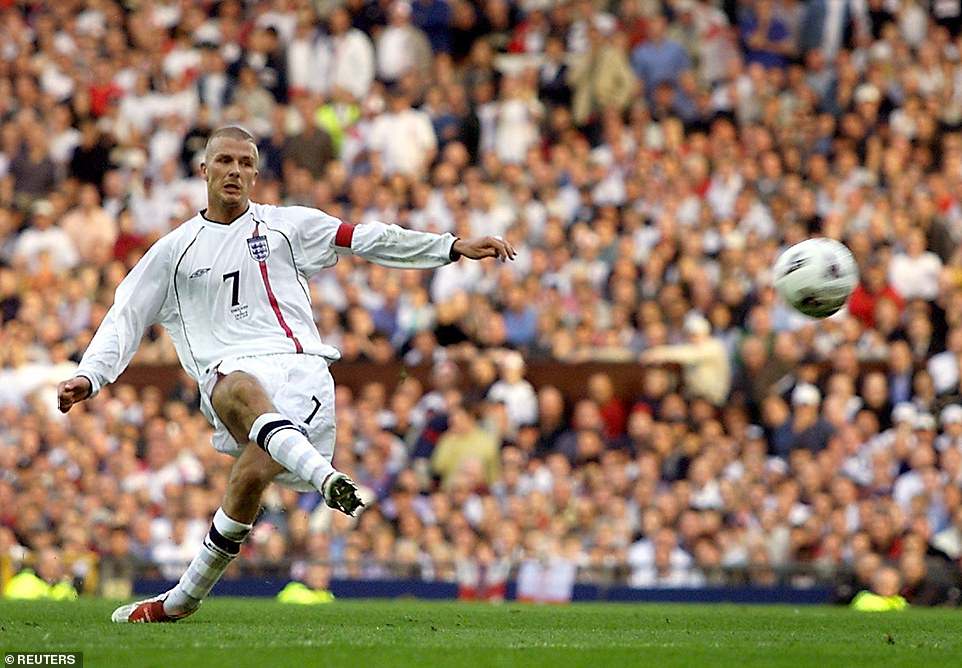 ‘It was spontaneous. I wasn’t 100 per cent sure that England were going to qualify automatically for Japan and South Korea when Beckham scored because Germany were still playing Finland in Gelsenkirchen,’ Motson recalls of the game 20 years ago this Wednesday.

‘I’d heard it was still 0-0 but had Germany scored in the dying seconds, they would have had more points than we did.

‘Trevor Brooking and I both jumped up when Beckham scored. I’ve never seen Trevor so animated, he even knocked some of the equipment off the table in front of us, we were both so excited.

‘Commentators should, strictly speaking, be unbiased but when you’re with England you certainly have a bit of patriotic fervour.’

As Beckham put the ball down, the whistle had in fact just sounded 415 miles away in Gelsenkirchen and the German fans who’d watched their team fail to break down Finland had come to believe old rivals England had let them off the hook by losing to Greece. 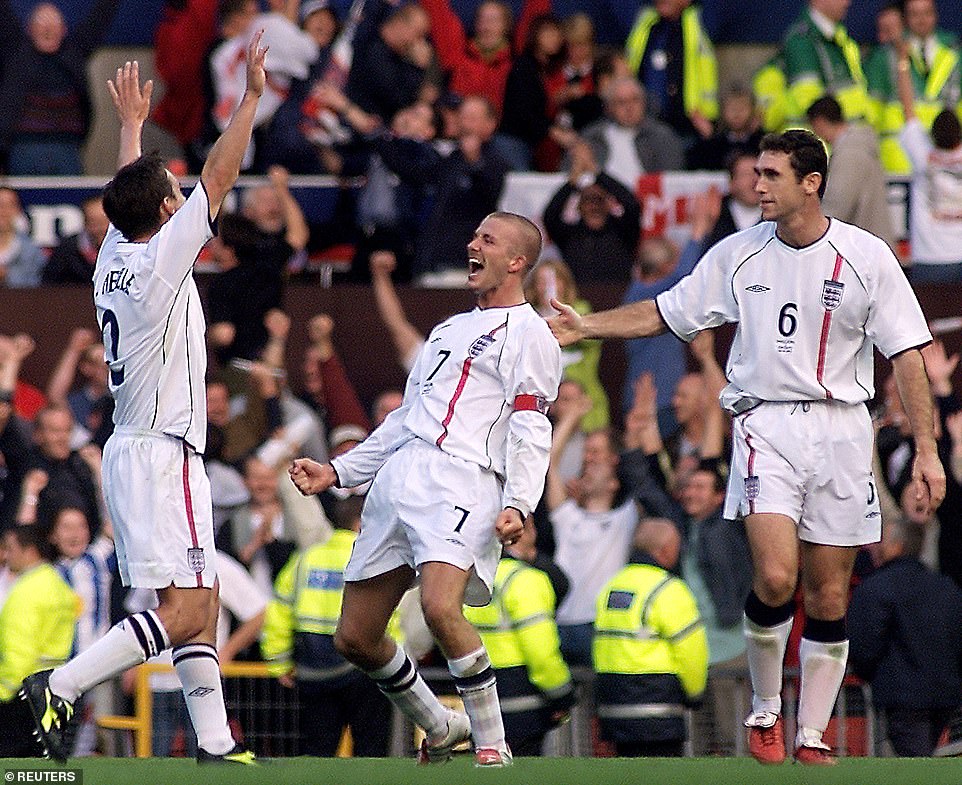 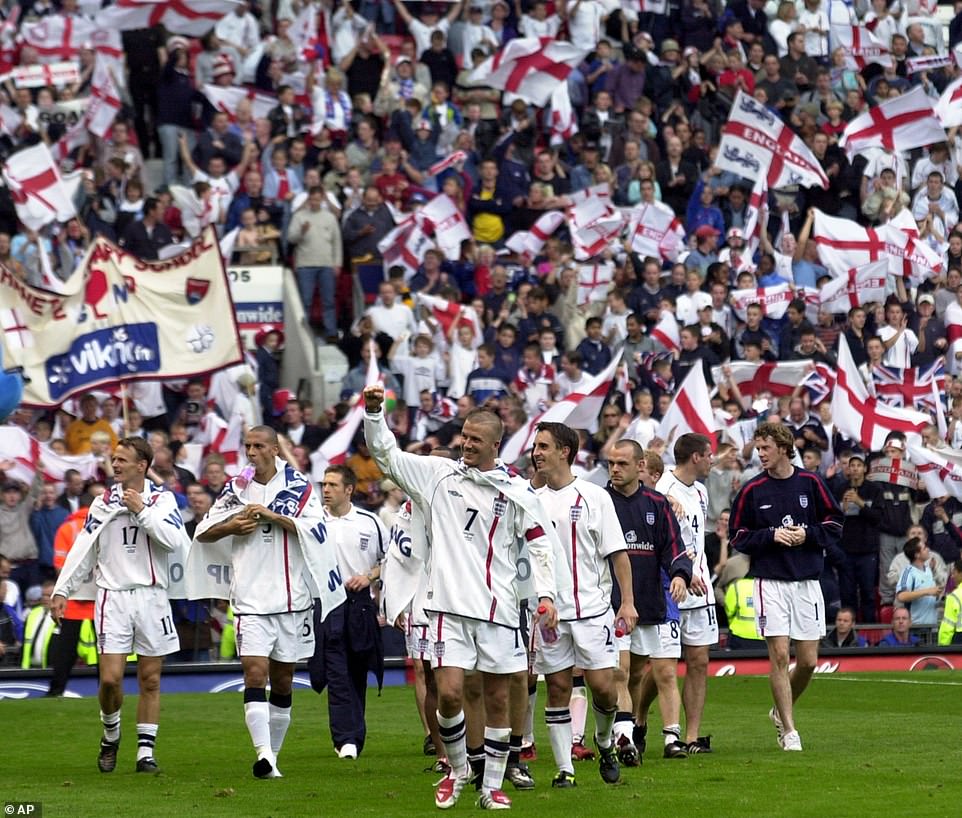 It was a fortunate escape for England, who had played well beneath themselves against modest opposition in Greece 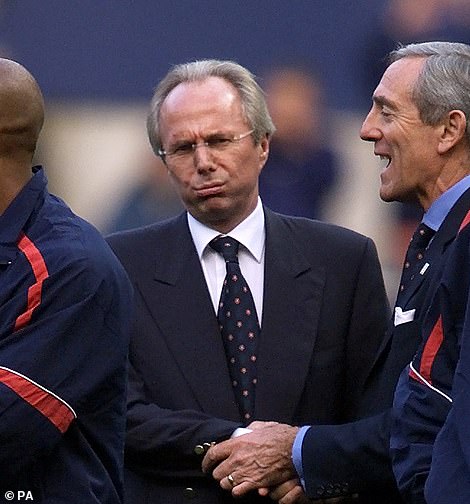 The German players rushed to the mouth of the tunnel, where a tiny TV monitor was relaying the pictures from Manchester.

‘I just heard this kind of scream. I remember the Germany goalkeeper Oliver Kahn cursing really loudly when Beckham scored that goal,’ said Antti Niemi, the Finland keeper that afternoon.

‘They were upset to say the least.’

England fans never forgot their debt of gratitude to Niemi, who played a blinder to keep Oliver Bierhoff, Michael Ballack and Co at bay and send them into a play-off against Ukraine.

‘I moved to Southampton in September 2002 and I still got a few comments from away fans saying “well done against Germany”. Normally you just get stick!’ Niemi said.

Back at Old Trafford, the stadium DJ officially started the party by announcing the Germany score and then played the Great Escape theme. It was certainly appropriate. 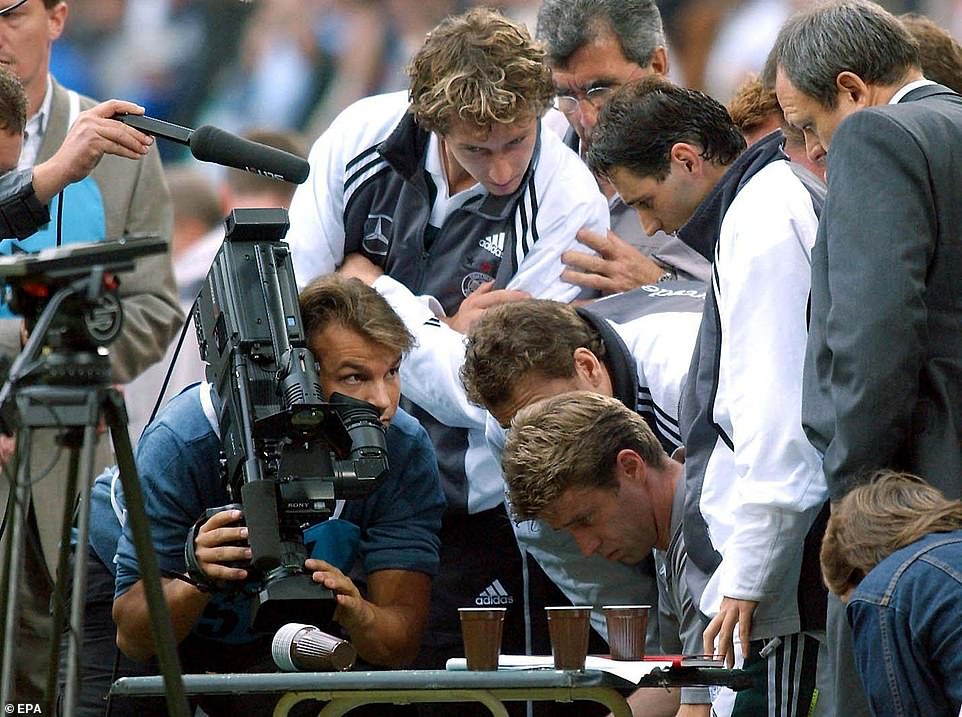 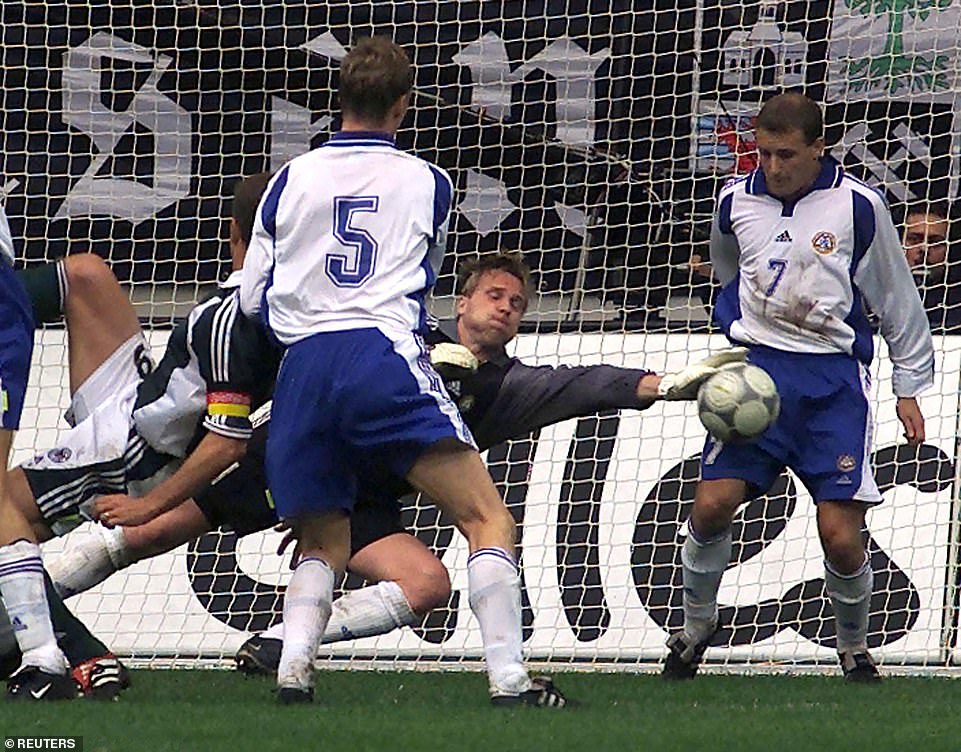 England’s road to the 2002 World Cup had started with Kevin Keegan resigning in the toilets after defeat to Germany in the final match at the old Wembley Stadium.

Caretaker manager Howard Wilkinson and his team couldn’t beat Niemi either during a goalless draw in Helsinki that left England bottom of the group.

Enter Sven-Goran Eriksson, the first foreign manager of the Three Lions, to turn the campaign around.

The Swedish coach oversaw a 2-1 win over Finland at Anfield, a 3-1 success in Albania and a 2-0 victory away to Greece in which Beckham also scored a free-kick.

That famous 5-1 win over Germany followed at the start of September, with Michael Owen’s hat-trick in Munich completely changing the complexion of a group from which only the top team qualified automatically. 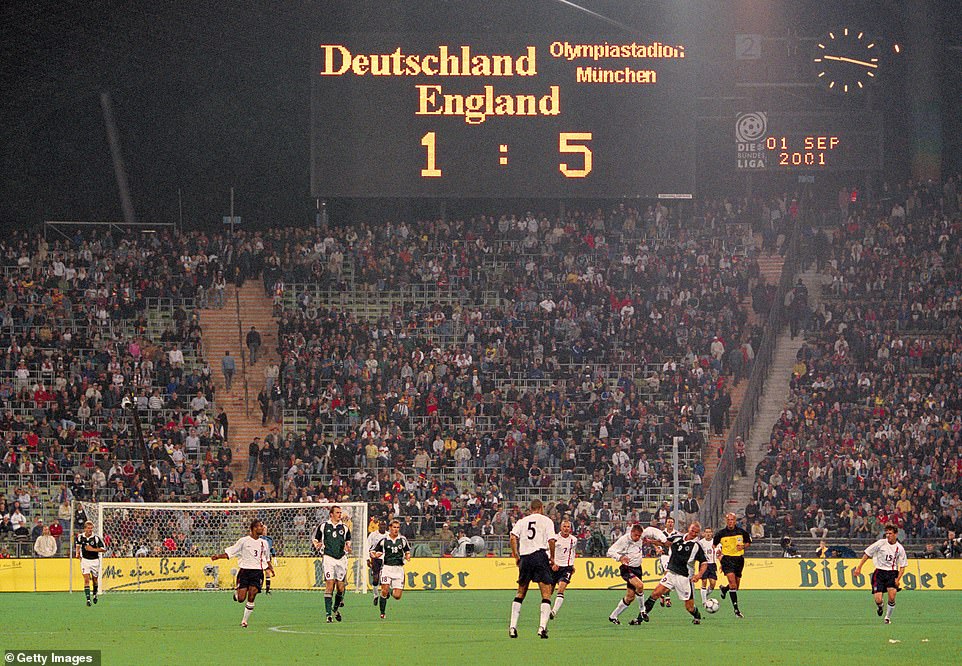 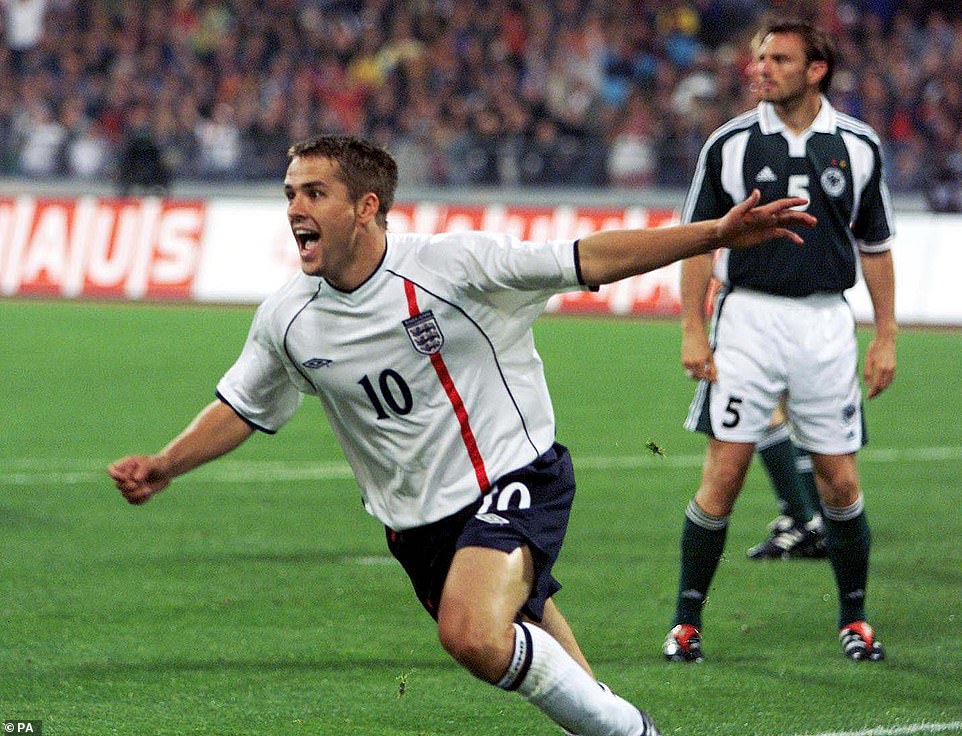 Their goal difference boosted, an unconvincing 2-0 win over Albania at St James’ Park took England above Germany for the first time.

The equation was simple ahead of the Greece game. Win and England were at the World Cup. Greece had just been thrashed 5-1 by Finland a month earlier. What could possibly go wrong?

Quite a bit, as it happened. England were seized by nerves and played terribly throughout. They created few clear-cut chances, snatched at shots and pinged long passes out of play.

Beckham, then a Manchester United player, had spent the previous day’s training session curling free-kicks into the top corner of the goal at the Stretford End.

But when it mattered on the day, Beckham’s free-kicks were finding row Z, the Greek defensive wall or the gloves of Antonis Nikopolidis. Nobody could fault Beckham’s application but everything was going awry when it mattered.

‘The game was just emotionless. It was one of those where you’d rather be watching than playing in it,’ said Martin Keown, in England’s defence that day.

‘You’re thinking, “I don’t really want to be out here at the moment.”

‘The crowd were very pensive and not taking part, just watching, and it was odd playing at Old Trafford as an Arsenal player at that time. You have to remember the fever pitch games we had there.

‘I just felt everyone was transfixed, time was standing still, nothing was going right. The team wasn’t gelling, it wasn’t happening.’ 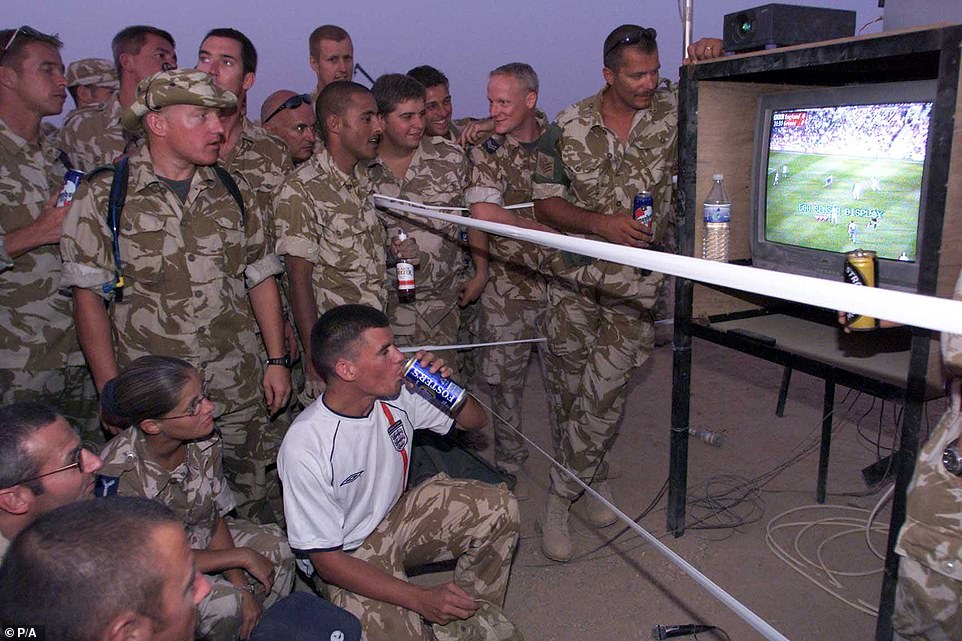 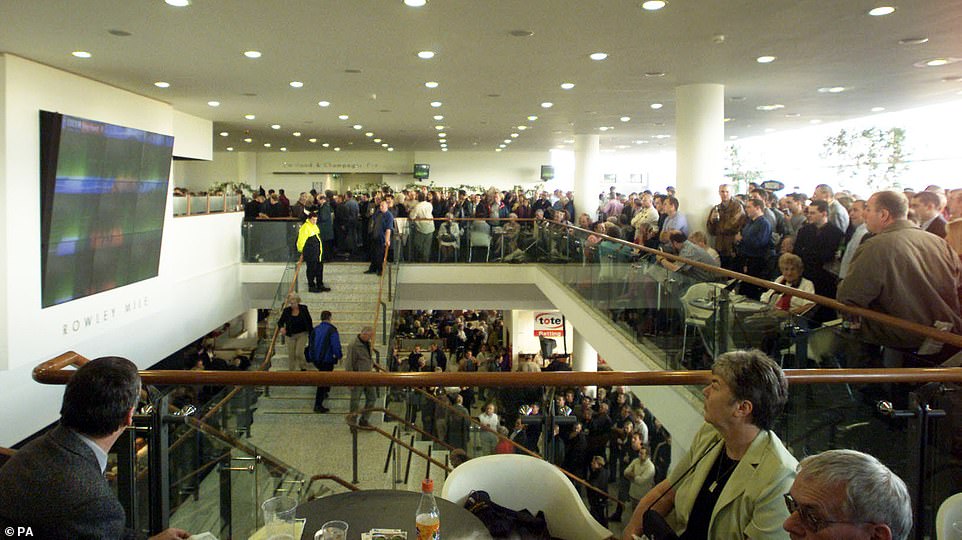 Disaster struck nine minutes before half-time. Ashley Cole was outwitted by Christos Patsatzoglou who teed up Angelas Charisteas to score past England keeper Nigel Martyn, deputising for the injured David Seaman. It was the first goal Greece had ever scored on English soil.

‘I can remember sitting on the bench with the now England manager Gareth Southgate,’ recalls Teddy Sheringham.

‘We were losing 1-0 at half-time and I remember our conversation walking to the changing room, saying: “This is where we will find out how good Sven is. He will earn his money now, we will hear some kind of speech, some chat and organisation and we will see why he’s the England manager.”

‘We both came back out to our seats and went, “well, that wasn’t very fulfilling, was it?”

‘You expect the manager to do something, say something, change something. That was it, no real inspiration, it was wishy-washy. Me and Gareth just looked at each other.’

Introduced for Robbie Fowler in the 67th minute, Sheringham took it upon himself to do something. 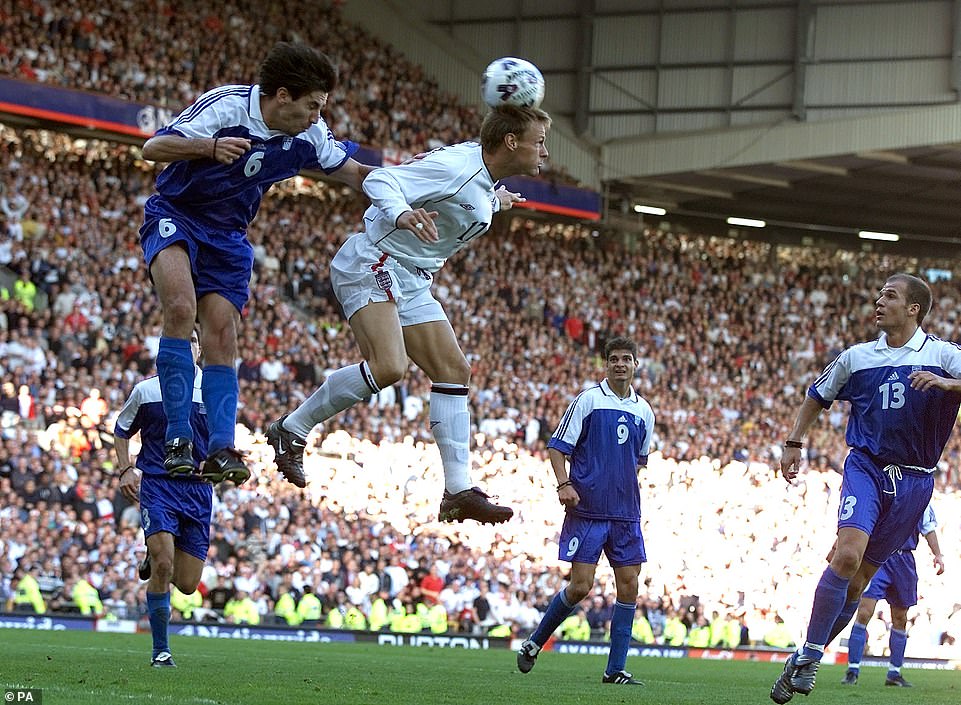 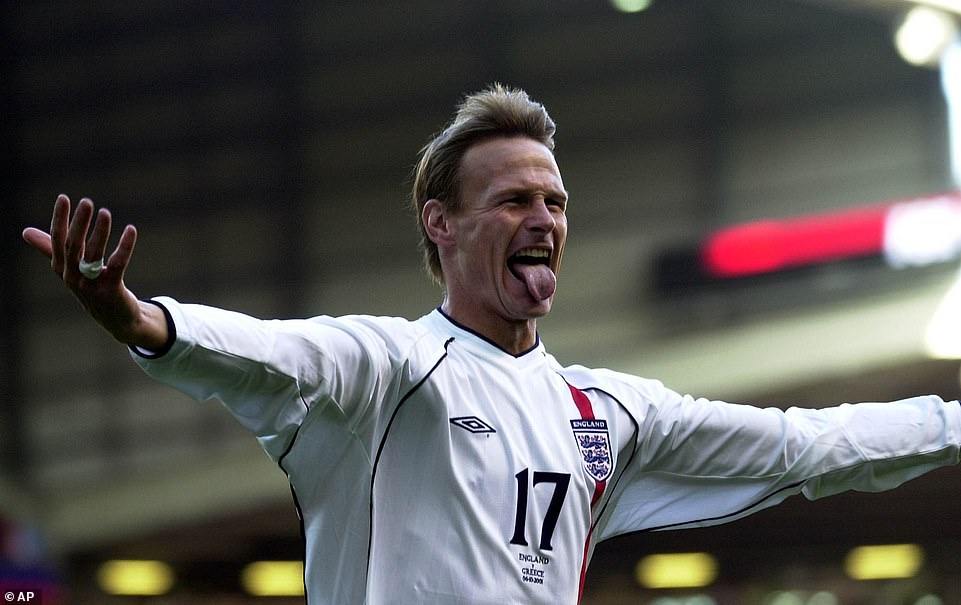 Sheringham, back on the ground of his former club Man United, celebrates his leveller – but the drama was only starting

Old Trafford erupted then waited expectantly for the inevitable England winner. Instead, the opposite happened.

Just two minutes later, a defensive lapse permitted Demis Nikolaidis space on the edge of the six-yard box to restore Greece’s lead. England were back to the Japan via Kiev route.

Now the minutes melted away and still it didn’t happen for England. The incessant drum beat from the England band faltered, faces were etched with tension.

The play-offs loomed large when Sheringham drew a little nudge from Konstantinos Konstantinidis just over 30 yards from goal with 92:12 on the clock.

‘I said to Becks, “let me have this one, you’ve had enough,”‘ recalls Sheringham with a smile.

‘And he went, “Ted, you can’t even reach the goal from here. Go in the wall.”

Beckham was 26 at the time, his hairstyle a No 1 all over with a fashionable shaven line on one side. He wore a baggy long-sleeved shirt with the red captain’s armband on his left arm and white Adidas Predator boots.

His own personal redemption was about to be completed. Beckham became a nationwide hate figure when his red card for kicking out at Diego Simeone led to England being eliminated by Argentina at the 1998 World Cup.

A mannequin effigy of Beckham, complete with No 7 shirt and a sarong was hung from a noose outside a pub in Croydon, south London and he was public enemy No 1 wherever Manchester United played.

‘If he needed to put himself in people’s good books, that was the way to do it,’ said Motson.

‘He spent a season or two getting over that sending off and he got a lot of abuse for it but this made him the hero all over again.’

Marking the 20-year anniversary of his free-kick, Beckham said: ‘I get goosebumps when I think about it, talk about it, watch it, it was just a special moment.

‘That moment was redemption for what had happened because up until then there was always that cloud around the sending off. I felt that the real England fans and the fans that disliked me for a few year, all of a sudden were like ‘ok, that’s it, we can move on now.’

‘To represent my country, to captain my country, to score a goal that meant so much to our country and the fans, and to do it all at Old Trafford, for me, it couldn’t have been any more perfect.’ 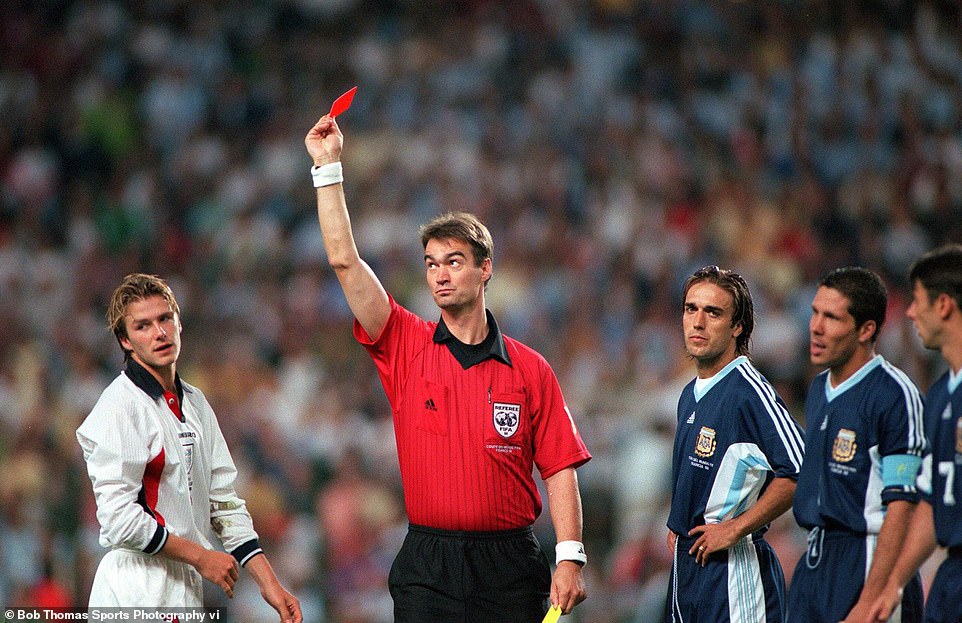 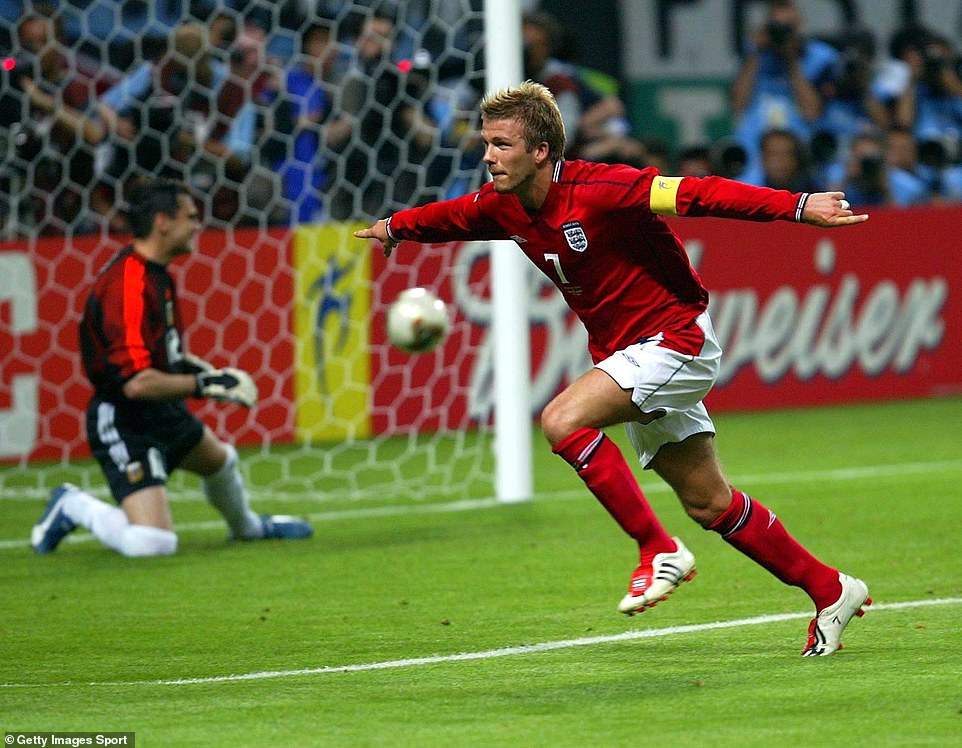 His penalty against Argentina at the World Cup the following year fully restored ‘Goldenballs’ to national hero status.

But the ironic thing is that while England crashed out to Ronaldinho’s lob of Seaman in the quarter-finals at the World Cup, the Germany team they’d pipped to qualification on goal difference went all the way to the final, also losing to Brazil.

The World Cup turned out to be a disappointment, but no nation will ever reach one more dramatically.