The NFL is a sport like no other. You will be hard pressed to find anything that pushes and challenges the human body in so many different ways and demands such a variety of body sizes, shapes and skills to win.

Take the New York Jets, who play against the Atlanta Falcons in London on Sunday, as an example. On one side of the ball you have 5ft9, 12st 6lb receiver Jamison Crowder whose job it is to be light on his feet and make explosive runs down field.

But on the other there is the 6ft4, 22st defensive tackle Folorunso Fatukasi who likes nothing better than smashing through challenges and crushing the opponent’s quarterback at will. Both are crucial for victory. 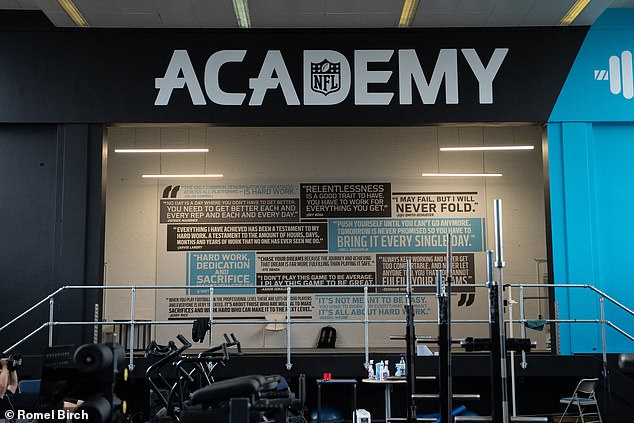 Everything away from the pitch is tailored to allow every player in every position to maximise their performance. From gym routines to their diet, no stone is left unturned.

With the return of the NFL’s London games this weekend, Sportsmail was invited to take on a gruelling gym session that had been devised by Jets wide receiver Braxton Berrios.

The session took place at the impressive gym facility housed at the NFL academy, based at the Barnet and Southgate College in north London.

The academy aims to develop students, both in American football and educationally, so they can one day play NCAA college football in the United States and hopefully have a shot at making the NFL.

Academy athletes have access to elite sports training facilities, kit and equipment, as well as an opportunity to learn from players and coaches from the NFL.

Open to students aged 16-19, it is not somewhere you go just because you play an occasional game of Madden and fancy it is a quarterback. Entry is based on a series of physical tryouts, along with a one-to-one interview and educational assessment. 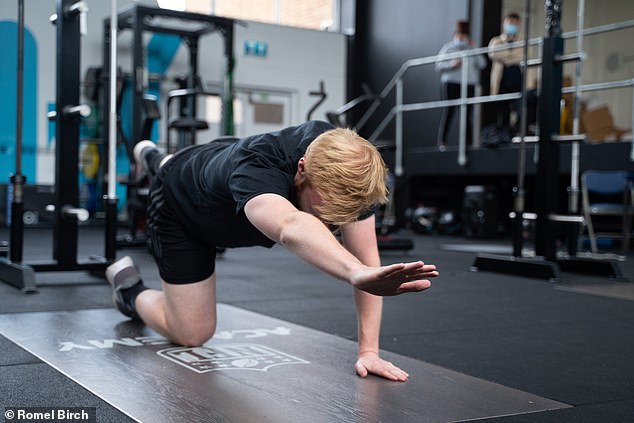 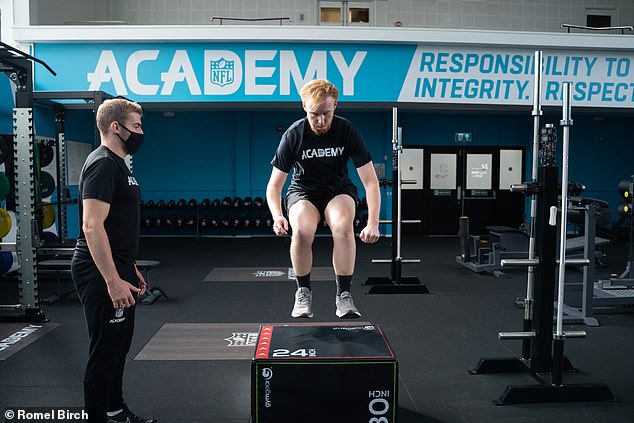 After arriving at the academy, it quickly became clear that we were going to be pushed to our physical limit thanks to the brutal workout Berrios had planned from across the Atlantic.

HOW AN NFL WIDE RECEIVER WORKS OUT

We were immediately thrown into the thick of the action with a warm up centred around activating and mobilising the areas that a wide receiver would commonly use during a game.

Receivers, the sprinters of the team, must hit high velocities to stretch the pitch and elude defenders and exercises like this help mobilise the key areas to enable that.

This involved doing three sets of 10 pogo hops to help work on ankle flexion and hip mobility. Receivers also have to jump from a sprint and therefore those ankle joints must be robust to support that action.

It was a gentle introduction for what was to come and once that was complete we moved onto the man part of the session which centred around lower body strength and power.

NFL stars are power athletes at their core and whether it be on the offensive line, defenders trying to squash their opponents or the running back and receivers trying to make a play, making powerful movements at high speed is crucial.

Along with some back squats, box jumps and the single arm row, we were told to do three sets of six reps on the bench press. The bench press is one of the key tests in the NFL combine – a week-long audition for college football players who are trying to impress NFL coaches and scouts.

Being able to lift weight on the bench press is a crucial strength skill for all players, from the NFL academy through to players on the Jets roster. It helps to ensure players are well-rounded, rather than being chest or back dominated.

With my arms painfully burning at this point, it was a relief to hear attention would then be shifted to the legs and the core, where we did a series of single leg step ups and V sit ups. 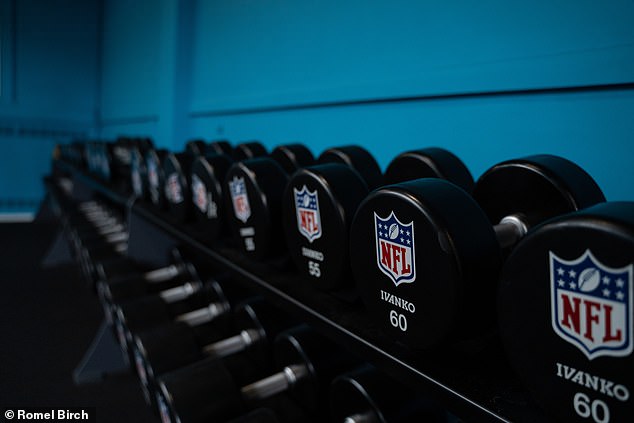 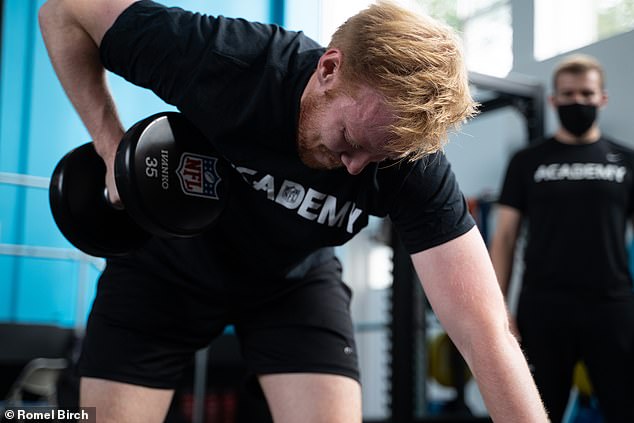 The majority of a football player’s game – especially wide receivers – is spent on a single leg as they try to jump, twist and dodge opponents.  It is therefore crucial that players are as strong as possible on either leg.

It is also vital that a player’s core is as robust as it can be. Key skills like running, jumping and landing stem from that area and a strong core provides the base for players to do everything else.

The session – which at this point I was desperate to finish with my entire body screaming in pain – then concluded with ’21s’, which is seven bottom, seven top and seven full bicep curls.

Having a strong grip while protecting the ball is key for a receiver and the curls help with carrying it too. 21s are also seen as a light-hearted way to finish the session and can be the backdrop for intense competition between academy stars and NFL players.

With a whole body ache now in full flow, it was more than a relief to conclude the session and sit down for a chat with Berrios. He had just arrived at the Jets’ training facility in Florham Park, New Jersey and was preparing to take on the Tennessee Titans.

The Jets would go on to pick up their first win of the season in a dramatic over-time finale. It was the perfect preparation ahead of their trip to London to take on the Atlanta Falcons on Sunday. 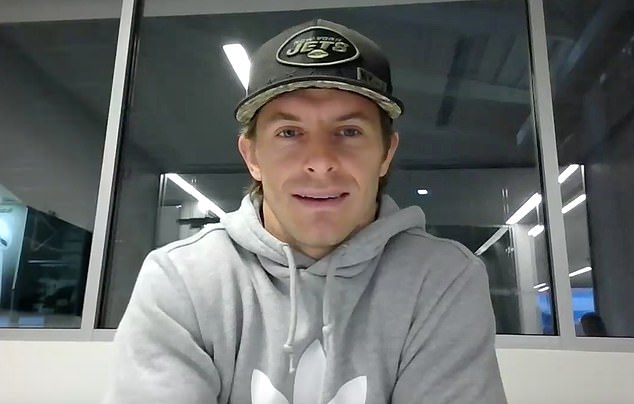 Asked how the workout we had done compared to his daily routine, Berrios admitted it was similar but his can be vastly different depending on the time of year.

The former New England Patriot told Sportsmail: ‘The workout I sent you guys is obviously a few things I do and a lot of that is determined by whether it’s in season or the off-season.

‘In season it’s all about trying to build strength but really maintaining through a full season when your body is getting beaten up and you’re going through 18 weeks. So the mindset changes just a little bit.

‘The off-season is your time when you really hone in on getting bigger, stronger and more explosive. Its harder to become more explosive in season with it wearing your body down, you’re trying to maintain what you’ve done the last six months building.

‘It really comes down to your routine and that’s often what the young guys who come into the league have to understand. There’s no more school you know. You don’t have to go to class. This is what you do. This is your job.

‘It literally ends up going back to your routine and you have to be really methodical, saying, “I have to do this and next time this” just so those little things don’t get away from you. 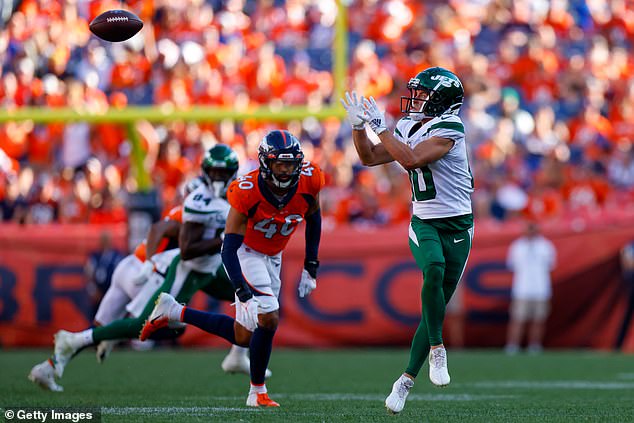 ‘All the little intricate skills you talk about that allow you to do what you do they always have to be worked on, whether it’s in practice or in the training room. You’ve just got to have a routine that you really stick to and that helps.’

NFL continues to grow in popularity this side of the Atlantic with a lively fan base, huge TV viewing figures and an ever-expanding Fantasy Football community.

The weekly audience for live games shown on Sky Sports, who in 2020 signed a new five-year broadcast deal with the NFL and now has its own NFL channel, were up by 34 per cent.

Sunday’s match will be the first time Berrios has been to London, which will also host the Jacksonville Jaguars and Miami Dolphins at Tottenham on October 17.

He admits it will be tough for the Jets to adjust to the time difference and that they’ll face an uphill battle to be at their physical peak for the game.

‘I’m absolutely looking forward to it (coming to London),’ the 26-year-old added. ‘I think it’s a huge opportunity for us. 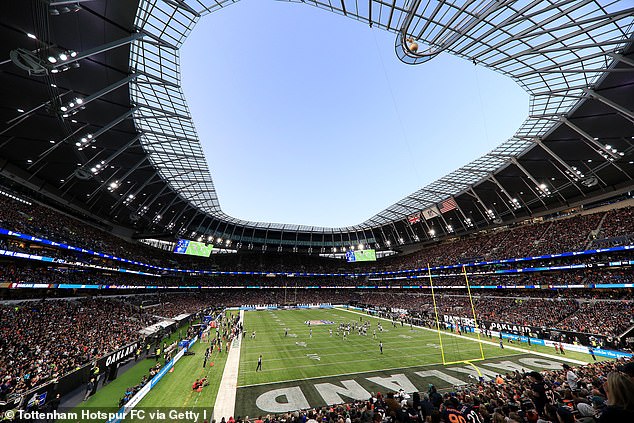 ‘It’s really cool to go somewhere, bond over it and be almost isolated together away from the US.

‘I’ve never been to London and I know there’s a large group on this team, definitely the majority, who have never been either. I think it’s going to be a really cool experience for us.

‘We come to London on October 7 and that’s going to be a huge adjustment with the time. Everything does change.

‘We just had a flight to Denver which is only two hours behind but you are five hours ahead so everything is absolutely going to change. We’re going to have to plan for that.

‘It’ll be accelerated, hydration will be a huge part of that because it’s a long plane ride and then your sleep schedule is just as much recovery as treatment and being in the training room so that is obviously going to have to increase as well when we fly and try and reset our bodies.’

After completing his gruelling workout, Berrios is not the only one whose body requires a reset.