Daniel Craig’s James Bond swansong has sold more than 1m tickets at Odeon cinemas in the UK and Ireland.

For around half of those watching No Time To Die it was their first cinema visit since the Covid-19 outbreak, the cinema chain said.

It is the most attended film since Star Wars: Rise Of Skywalker in 2019 in a major boost for the sector, which has struggled through the pandemic.

Some shut for as long as 16 months between March 2020 and August 2021 because of restrictions and the dearth of new releases.

Universal Pictures this week said the film took £89million at the international box office in its opening weekend, a Bond-franchise record, £26million of which was in the UK and Ireland. 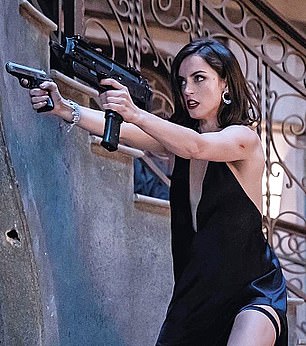 Fired up: Ana de Armas in No Time To Die

An Odeon spokesman said the return of Bond – starring Daniel Craig in his fifth and final outing as 007 – was ‘hugely exciting’ and ‘worth the wait’.

The 25th Bond movie was scheduled for release in April last year but was pushed back to November 12 and finally to this month because of the pandemic.

Stock market-listed Cineworld will be hoping for a similar boost from No Time To Die.

The firm’s shares fell 90 per cent in less than three months at the start of last year as the pandemic struck.