Marcus Smith orchestrated another miracle comeback for the champions on Friday night as Harlequins re-introduced Bristol to the ghosts of last season’s Premiership semi-final.

On that remarkable occasion, the Bears led 28-0 at Ashton Gate and ended up losing – and what happened at The Stoop this time was painfully similar for the West Country club. They were 21-0 ahead and seemingly cruising in the first half, but collapsed in spectacular fashion.

As their rivals unravelled, Harlequins simply ran riot. Smith marked his first appearance since the Lions tour by pulling the strings as the home side scored seven unanswered tries in a logic-defying second half.

Marcus Smith orchestrated another miracle comeback for the champions on Friday

Alex Dombrandt was imperious as Man of the Match – making a powerful Test case in front of England head coach Eddie Jones. Smith and Dombrandt are a dynamic double-act for their club and they could be for their country too.

Quins head coach Tabai Matson paid tribute to his leading men, saying: ‘Marcus Smith in this system is exceptional. Any time he gets into his groove, he not only creates opportunities but is a real handful for the opposition. The try he scored on the chip-through shows a world-class skill-set. He was a little bit rusty on some of his kicks, but this was his first game back so you expect that.

‘Alex is rare as a loose forward. He’s very skilled. His anticipation of where the line-breaks are going to be means that he can put the hammer down 10 seconds earlier in his support lines and assists. He’s so skilful. I thought he played exceptionally well. Defensively he was bloody good today and he got a couple of key turn-overs.’ 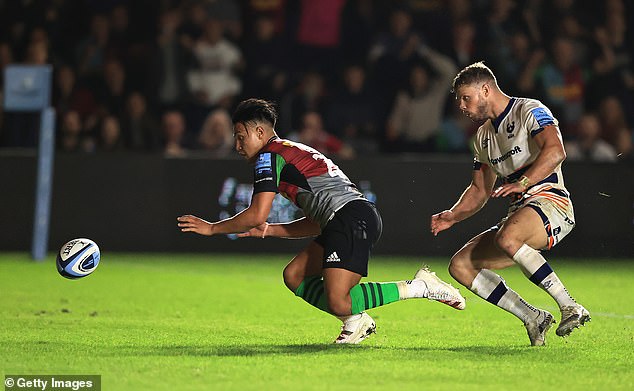 The Harlequins fly-half chipped ahead, ran through and pounced for a second-half try

By the end, the miracle had turned into a massacre. Quins were electric. They left a sell-out crowd in raptures and gave their title defence profound early impetus. But Bristol were abject in slumping to their third defeat in four matches. Their scrum and defence evaporated, as did their spirit. They were under siege at the breakdown. They were routed in all areas.

Pat Lam will wonder how to perform another exorcism to help his squad move on from this haunting ordeal.

‘We need 15 guys on the same page, doing their jobs well,’ he said. ‘We take the glory when we win games and we’ll take the hurt when we lose.’

The first half belonged to the visitors, who went into the break 24-7 up following tries by Joe Joyce, Henry Purdy and Charles Piutau, along with nine points from the boot of Callum Sheedy. All the hosts had to show for their efforts was a try by Louis Lynagh. 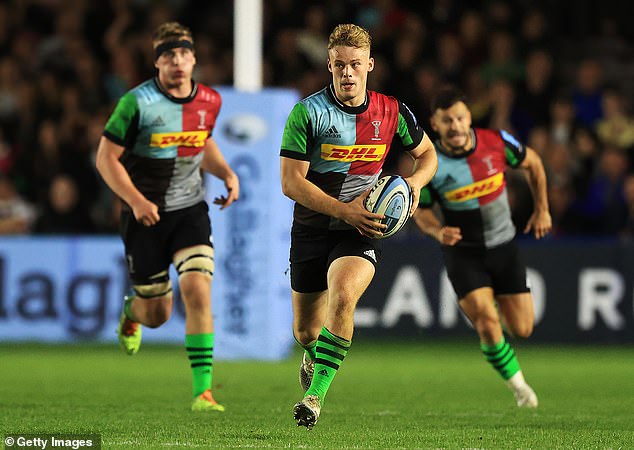 The turn-around in the second half was staggering to behold. In the 47th minute, Smith’s off-load allowed Lynagh to burst clear, he sent the ball wide left to Andre Esterhuizen, took the return pass and scored again, under the posts.

The fuse had been lit and the fireworks continued. Tyrone Green’s arcing run and Dombrandt’s back-hand off-load freed Esterhuizen to score. Then Quins went ahead as Danny Care’s pass sent Luke Northmore over.

It was mayhem. Replacement prop Will Collier scored within seconds of entering the fray. Green capped a break-out on the left by diving over. There was no let-up. The next time Quins were in range, they lost momentum so Smith chipped ahead, ran through and pounced. Then Dombrandt struck from an interception. His No 10 side-kick finished up with six conversions as Quins passed a half-century.