Jack Crawford will be cheering on close friend Grady Jarrett as the Atlanta Falcons take on the New York Jets tomorrow.

London-born Crawford spent three years alongside Jarrett on the defensive line after joining Atlanta in the aftermath of their incalculable Super Bowl LI defeat.

Jarrett – the son of Falcons great Jessie Tuggle – was the Super Bowl MVP in waiting that day in Houston.

Jack Crawford, pictured during last season’s spell in Tennessee, is currently on IR

The defensive tackle sacked Tom Brady three times as Atlanta’s defense stymied the Patriots, while a potent offense put the Falcons 28-3 up in the third quarter.

And then fate – or whatever it was – took hold. Atlanta didn’t score another point as New England charged to a 34-28 overtime win.

The defeat looms over the franchise to this day, let alone in the weeks afterwards.

‘I got to the Falcons the following season, that spring. Coming into that meeting room after that, the first meeting after that game was like – I could feel it in the room,’ said Crawford over Zoom.

‘I remember head coach Dan Quinn talking about putting it behind us. I was like: I didn’t have a part of that, but I could only imagine the heartbreak, of being in that position and thinking that you have the game in the bag and then losing it like that.

‘I was at the Cowboys and we lost to Green Bay in similar fashion in the playoffs that season. I thought that was bad, but I couldn’t imagine being in there.’ 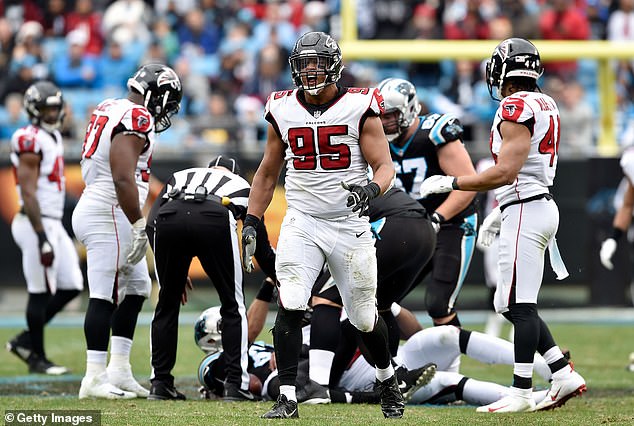 The London-born defensive end spent three years in Atlanta, joining them from Dallas in 2017

Nine-year veteran Crawford, 33, is currently on IR after injuring his rotator cuff two weeks into his career at the Arizona Cardinals.

After spells with the Raiders, Cowboys, Falcons and Titans, he knows how precious a run to the postseason is.

‘It’s just weird how quickly those playoff games – and I’m guessing the Super Bowl – fly by. It’s intense, there’s nothing like playoff games, but then once the game gets going, it’s already the third quarter and then you just don’t know how the game’s going to pan out.

‘And before you know it, it’s over. And you’ve gotta look forward to the next season.’ 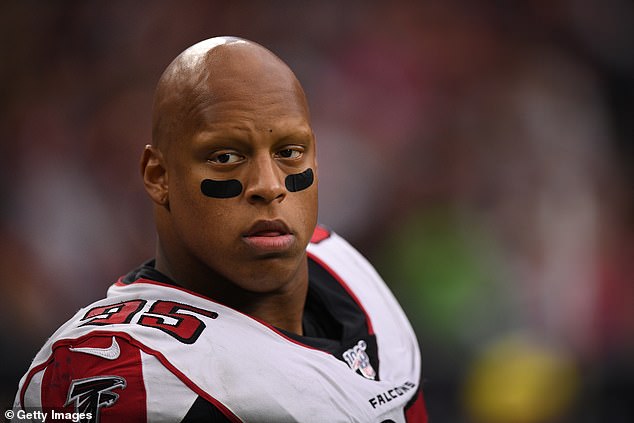 Like the rest of the world, Crawford watched the game in astonishment. But one player caught his eye.

‘I remember watching that Super Bowl and watching Grady tear it up and get three sacks. Who is this guy? His name wasn’t even big at that point,’ he said.

‘After I got to the Falcons, we just bonded, we just clicked. Him, Vic Beasley and me – everybody who was there was great.

‘I still keep in touch with a bunch of them, because we played for at least three years together but me and Grady, we just kind of build that friendship and I’m excited to watch him play on Sunday. 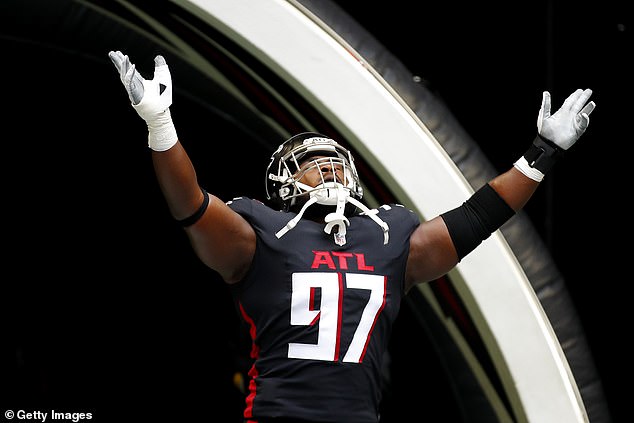 ‘He’s such a great guy man, all around. He gives back to the community, he doesn’t ever use his position to make people feel bad, he never puts people down, he just always builds everybody up.

Atlanta reached the playoffs in Crawford’s first season, losing to his former team Dallas in the divisional round.

The Falcons have not reached the postseason since and are 1-3 under new head coach Arthur Smith.

Crawford says the franchise are in good hands. He left Atlanta last year and spent a season in Tennessee. The Titans reached the playoffs – in no small part thanks to Smith’s creative offense. 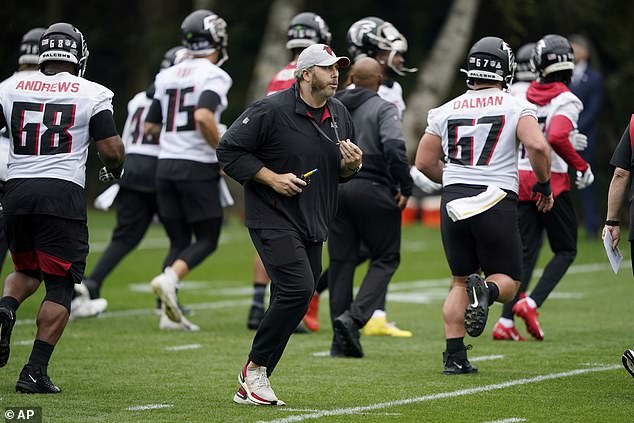 ‘He’s a great guy,’ Crawford said. ‘I didn’t have a lot of time with him because defensive lineman and offensive coaches would maybe say: “Hi”. Maybe the offensive line coach, we would know fairly well, but outside of that, you’d barely just say: “What’s up” in hallways.

‘But Arthur Smith would always take time to talk to me. He would say: “That was a hell of a job, great game”. He would specifically come out and say that to me for whatever reason – he was just cool. A nice guy and as a coach, he’s a great football mind.

‘I was happy that he made the move to Atlanta and I’m excited to see how he does over the rest of the season and hopefully next few years.’

Watch the Atlanta Falcons vs the New York Jets at the NFL London Games live from Tottenham Hotspur Stadium this Sunday, 10th October on Sky Sports NFL and NFL Games Pass from 1:30PM, highlights on BBC One and BBC iPlayer.