They came in their thousands in the expectation that world No 1 Jon Rahm would emulate Seve Ballesteros and become a three-time winner of the Spanish Open.

Instead, it was a couple of hometown players from the undercard who fought out a fine duel in the Madrid sunshine, with former Ryder Cup player Rafa Cabrera Bello edging it at the first hole of a sudden death play-off against Adri Arnaus.

It was the 37-year-old’s first win for four years and transformed an horrendous season that had seen him plummet to 231st in the world. ‘I came here in my worst shape for a decade and walk out with the trophy that means more to me than any bar the four majors,’ said the man from the Canary Islands. 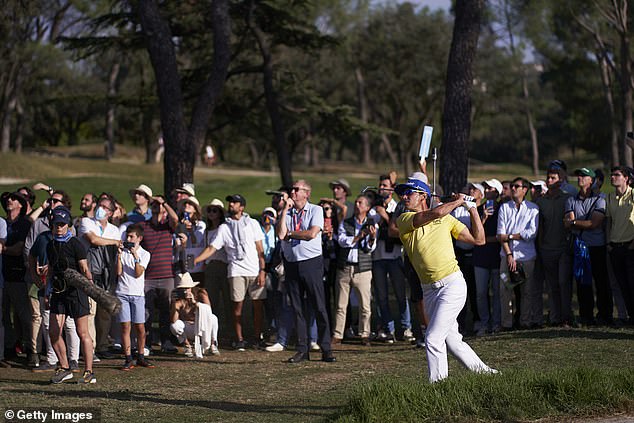 Rahm was bidding to make it a hat-trick of successive Spanish Open titles but there was no final round rally as he settled for tied 17th place. Best-placed Brit was Scotland’s Grant Forrest, 28, who transformed his week entirely with a fabulous back nine completed in just 28 strokes to finish tied third. Late-developing Englishman Jack Senior, in his 93rd tour event, came up one stroke shy in his bid for his first top-three finish.

The Lancastrian, 33, led briefly early on but a bogey at the 16th proved costly, as did a birdie putt at the 18th that caught part of the hole but refused to fall.

Cabrera Bello came into the final day with three tournament wins to his name and played well in a losing Ryder Cup team at Hazeltine in 2016, but he has always struggled with the pressure on a Sunday afternoon. 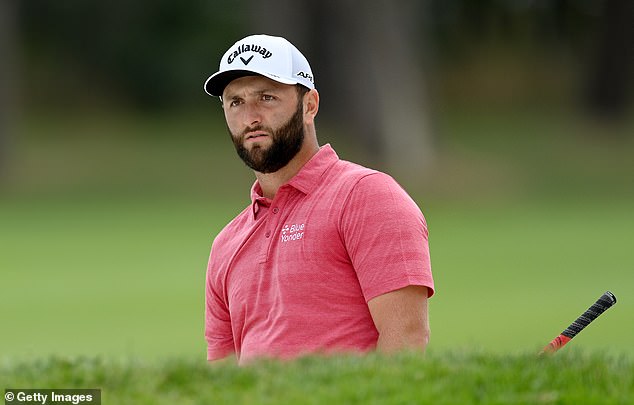 The Spaniard saw off compatriot and World No 1 Jon Rahm, ending his dominance in Spain

It looked a familiar story when he began with a gut-wrenching double bogey at the first to wipe out his two-stroke overnight advantage but he fought back as he and Arnaus matched each other stroke for stroke.

Nerves appeared to cost Cabrera Bello once more when he drove wildly at the 18th at historic Club de Campo, but a fortuitous free drop followed by a fine recovery allowed him to get his par and force a play-off.

He took full advantage with a winning birdie when the pair returned to the 18th. ‘I’ve always felt a special connection with this city and to win in front of my family feels very special,’ he said.