New coaches, exciting rookies and dysfunctional teams as the Atlanta Falcons and New York Jets pick up the NFL baton in London

By Peter Carline for MailOnline

Two of the NFL’s more dysfunctional franchises meet at Tottenham Hotspur Stadium for the 29th regular season game in London.

The Atlanta Falcons – who were due to host the Denver Broncos in the capital last year – play nominal hosts to the New York Jets.

The Jets won their only appearance in the Super Bowl  in 1969, but have struggled for any kind of normality since. Atlanta are in a league of their own for baffling defeats. Before Super Bowl LI came their first appearance in London – leading 21-0 at half-time, they managed to lose 22-21.

Both teams are 1-3 and will hope for a restorative win and a soothing flight home heading into an early bye. For the losers, travelling back across the Atlantic can be a long, tetchy affair.

The Falcons and Jets are in rebuild mode: two first-time head coaches handed the reins after excelling on either side of the ball.

Arthur Smith spent a decade at the Tennessee Titans, his last couple of years rejuvenating Ryan Tannehill’s career and helping Derrick Henry rush for over 3,500 yards as one of the NFL’s more creative offensive coordinators.

And Robert Saleh is the defensive mastermind charged with restoring the Jets to respectability. His defense took the San Francisco 49ers to the Super Bowl two years ago and he is on his fourth trip to London, having been three times with the Jaguars. 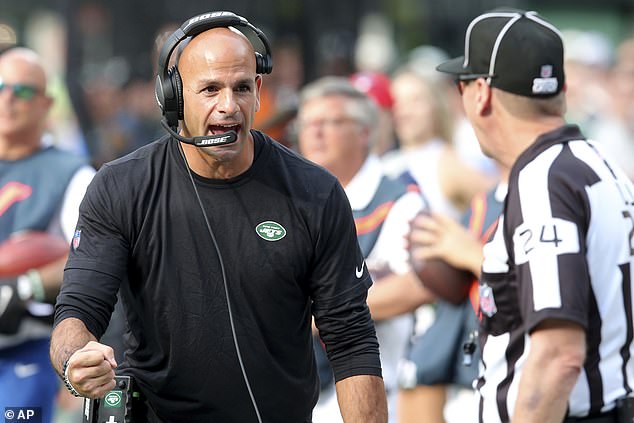 It has not been an easy introduction to life in the spotlight for Smith, who ruled out star receiver Calvin Ridley before the Falcons left for London due to a ‘personal issue’.

‘We’ll keep it personal for him. But nothing to add there. We put out the statement. Obviously, we support Calvin. We’ll see what happens when he comes back,’ Smith said on Friday.

The wide receiver leads Atlanta with 27 catches for 255 yards, and fellow receiver Russell Gage is out with an ankle injury.

That leaves the door open for versatile tight end Kyle Pitts, the fourth overall pick of the draft. While is yet to score a touchdown – he has 15 catches for 189 yards – great things are expected of the Florida product.

‘I would think that he’s going to get a lot of touches,’ Jets linebacker CJ Mosley said on Friday. ‘He’s running all the routes a receiver does. He has the same speed, he has great hands.’

Saleh spoke of the weapons facing his team, who sacked Titans quarterback Tannehill seven times on the way to their first victory of the season.

‘Matt Ryan can get the ball to anyone. Their draft pick Kyle Pitts is pretty fricking good,’ Saleh said. ‘He’s going to be a major problem in years to come.

‘He’s a rookie too, so he’s learning the speed of the game and everything, but you see it on tape and the flashes that he has – he’s going to be a problem.’ 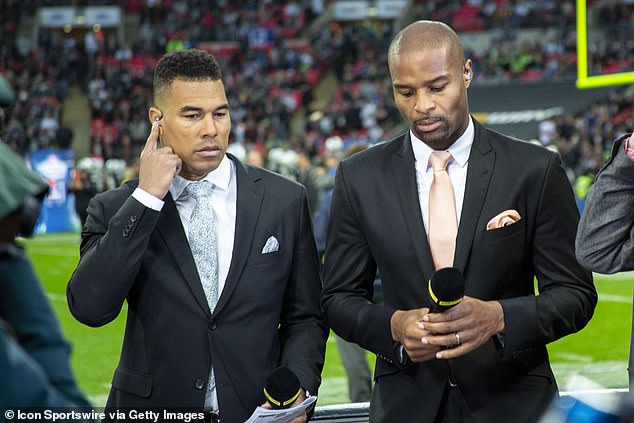 ‘It should be a great game, the way the Jets defense played last week, they really got after the quarterback.

‘The Atlanta offense has been performing at a pretty high level. Kyle Pitts, will he continue to emerge as a dominant force, let’s see what Patterson can do.

‘This match-up between this offense and the New York defense, led by Robert Saleh, that’s what I’m most excited to watch.’

‘The question over Arthur Smith when he came in was if he could get this offense together and do what he did in Tennessee. Creative play designs, run the ball off play action.

‘He was excited when he got Matt Ryan, despite everybody talking about getting another quarterback.

‘You can see what he is doing with Cordarrelle Patterson. When you have a weapon like him, dispersing him in the ways that they have shows they have creativity.

The Jets picked Zach Wilson with the second pick of the draft. While he leads the NFL with eight interceptions, the 22-year-old is coming off a decent performance against Tennessee, where all his improvisational skills were on show.

‘You find what things you can still improve on – good or bad plays,’ Wilson on Friday. 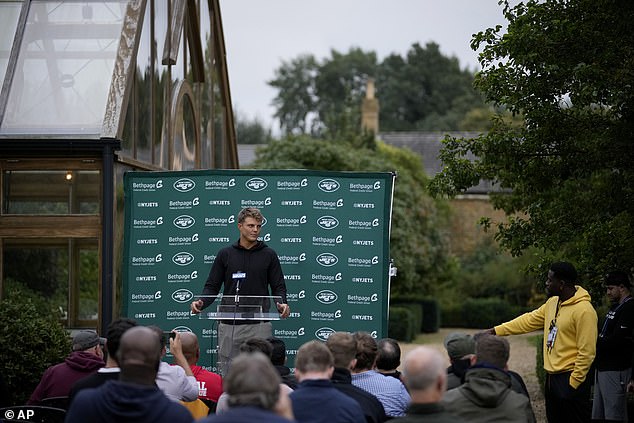 On his first trip to England, Zach Wilson spoke of his willingness to improvise plays

Saleh is keen for Wilson ‘to ball’, and used the explosive examples of Patrick Mahomes and Aaron Rodgers.

‘But they also play a game of game management and they just wait for you,’ Saleh said.