Northampton lost their unbeaten start to the season at Wasps, and their coach Chris Boyd saw red after Gabriel Oghre was only yellow-carded.

The Wasps hooker swung an arm at scrum-half Alex Mitchell after an hour, sin-binned after it was ruled he did not make direct contact with the Saint’s head, and Boyd bemoaned the decision.

‘There is no doubt it’s a red card,’ said the New Zealander whose side lost the sin-bin period 6-5 having been 20-10 down before it.

‘I don’t like the process particularly but you can’t tell me a swinging arm to the head, there is no sanction, I don’t think there is any malice or intent, it is unfortunate but if that is not a red card there is no red card.

‘We were probably too dumb to take advantage of the gift we were given anyway. I’m p***** off. Today the chickens came home to roost.’ Wasps had 38-year-old Jimmy Gopperth to thank for the win – the evergreen kicker hitting two late penalties after Jacob Umaga missed three off the tee.

‘When you bring on someone like Jimmy to close out a game you know you’re going to be in a good place,’ said Wasps No 9 Dan Robson after. 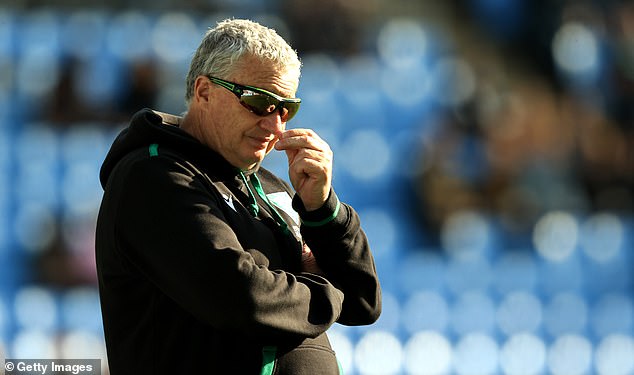 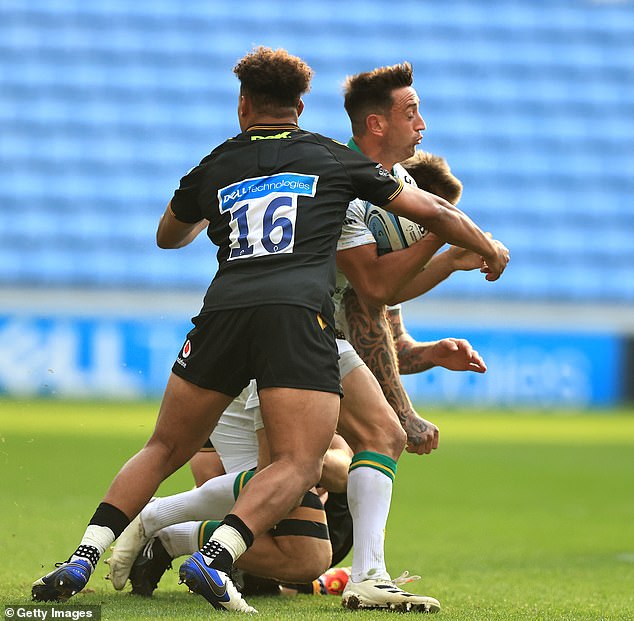 ‘I can tell you as a 29 year old I don’t know how he does it. He’s a very special player and a special bloke.’ In a fast-paced and harum-scarum first half the sides shared 20 points and scored a converted try each.

Saints went first, Juarno Augustus breaking and feeding Sam Matavesi for a run-in, which Dan Biggar converted, and then from their first major attack 18 minutes in Wasps replied.

Theirs was a peach, Oghre breaking off a maul to dummy and go down the wing – he popped to Robson who released the flying wing Zach Kibirige who scored after a jet-heeled run.

Biggar then hit a penalty which Jacob Umaga cancelled out; but the Wasps 10 missed the final strike of the half, a penalty he should have converted for the lead. 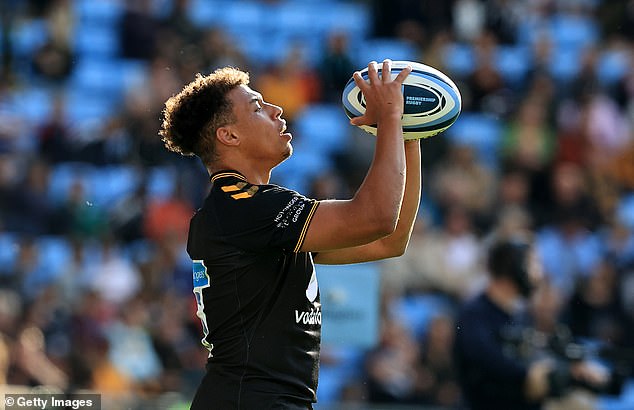 However, it was ruled that Oghre did not make direct contact with the Saint’s head 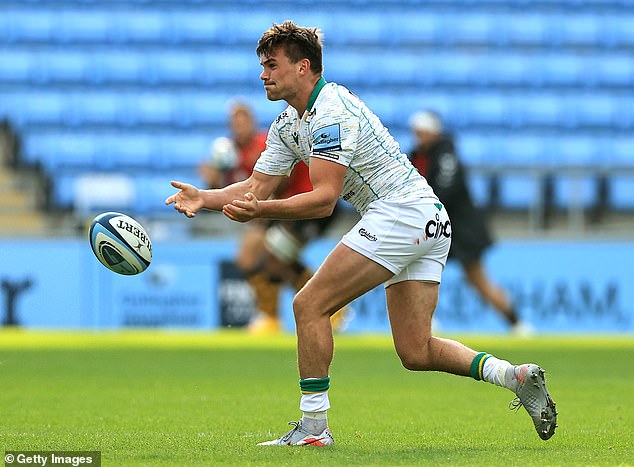 Northampton lost George Furbank, an early-season star, at half-time and almost fell behind three minutes after the resumption when Vaea Fifita galloped down the wing, but the assisting pass from Oghre went forward.

Umaga finally did kick Wasps ahead with a penalty, but then missed his next shot as the game became bitty.

Robson had the home fans off their seats though, collecting a sublime offload from flanker Thomas Young to score, and Umaga’s conversion stretched Wasps’ lead to 10 points with 20 minutes left.

Oghre’s yellow gave Saints hope – them rolling a maul over with Lewis Ludlam scoring immediately – but then Wasps closed it out.

Umaga missed a third penalty so Gopperth took the tee, kicked two goals which meant James Fish’s try for Saints with the clock dead only gave them a losing bonus point.