‘Systems are not what makes a team win’: Roberto Martinez hits back at tactical criticism after Belgium are beaten by Italy in Nations League third place play-off

By Matt Barlow for MailOnline

Roberto Martinez hit back at tactical criticism and as Belgium lost 2-1 to Italy in the match for third place in the Nations League.

‘Systems are not what makes a team win,’ snapped Martinez when quizzed about his decision to persist with a three central defenders and wing-backs. ‘It’s the execution of systems and that comes from the quality of the players.

‘You’ve seen a team today playing against the European champions and created more clear-cut chances and have a spirit to keep playing even when 2-0 down. We need to look a little bit further than results and be a bit more mature.

Martinez, who was without strikers Romelu Lukaku and Eden Hazard, and started with Kevin de Bruyne on the bench, also complained about Serbian referee Srdjan Jovanovic as the Belgians conceded their second penalty in two games in the Nations League final.

‘A tournament like this deserves experienced referees and I don’t feel this referee was at the level of either of the teams,’ said the Belgium boss. ‘It was an emotional performance and I feared seomthing would happen and the penalty was a clear example of that.’

Nicolo Barella fired Italy into the lead in Turin with a half-volley early in the second half – the 100th goal for the Azzurri under Roberto Mancini – and Domenico Berardi added a second from the spot when Timothy Castagne tripped Federico Chiesa. 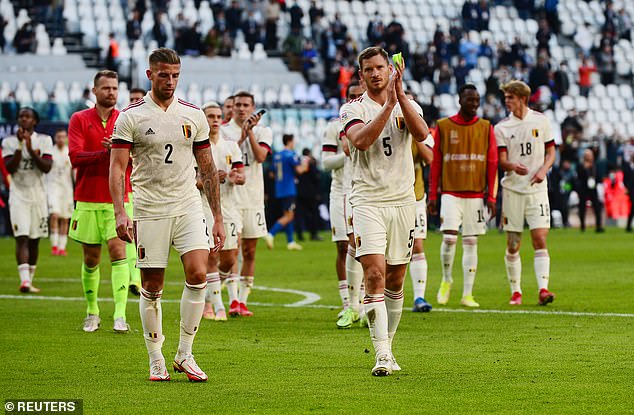 Castagne seemed to get a touch on the ball but the VAR chose not to intervene. Belgium became increasingly frustrated as they rattled the woodwork three times.

Alexis Saelemaekers and Michy Batshuayi both hit the bar. Saelemaekers in the first half when the game was still goalless and Batshuayi when they were one down.

Yannick Carrasco hit a post at 2-0 and Gianluigi Donnarumma made two strong saves both from Toby Alderweireld before highly-rated 20-year-old Charles de Ketelaere reduced the deficit with his first goal for Belgium four minutes from time.

‘It was a great performance,’ said Berardi, the Sassuolo striker who was voted man of the match. ‘We wanted to play well after defeat to Spain. We wanted to send out a positive message and we did that.’