‘They’ll want us to bite, to get angry’: Rhian Brewster calls for England U21s to remain calm against Andorra with minnows set to scrap in must-win tie

Rhian Brewster has warned that England’s Under 21s cannot become drawn into a scrap by Andorra Monday night.

Lee Carsley’s squad flew in over the weekend knowing that only victory will suffice against the minnows following Thursday’s disappointing 2-2 draw in Slovenia.

Brewster is expecting a physical bombardment after watching half of the seniors’ 5-0 win on Saturday night.

‘Andorra tried to get into their heads, leaving one on a few players and it’ll probably be the same in our game,’ said Brewster. ‘They didn’t bite back, they played their own game. They came here and got the job done. It’s going to be a mental battle.

‘We’ve got enough experience in this team to stick together and calm each other down if someone gets irritated. That comes from the older players.

‘It’s about keeping calm and composed, keeping your head. They’ll want us to bite, to get angry. They are going to want to fight us.’

Carsley is set to resist the urge to rotate heavily, mindful of the shock 3-3 draw in Andorra this time last year. The manager, who admitted he has ‘unrealistic expectations’ as a coach, is guarding against complacency. 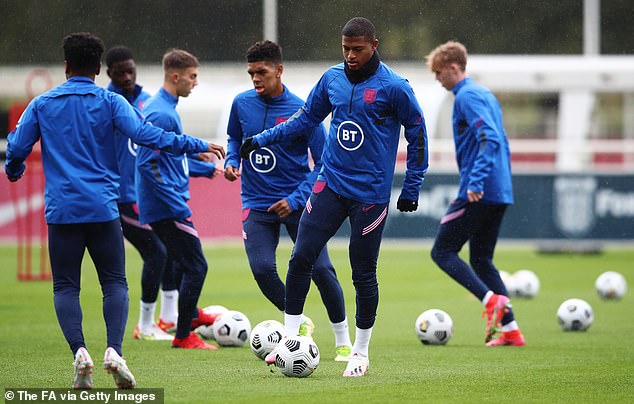 ‘There is sometimes a bit of arrogance of, “Oh, we should beat them”,’ said Carsley. ‘But you’ve got to outbattle your opponent, you’ve got to make sure that you are switched on for 90 minutes and be ready for that part of the game, which is important.

‘They are a banana skin. Andorra will be highly motivated, they’ll want to put on a show because it’s potentially a chance for them to show other teams that they are capable of playing at a higher level. We’re under no illusions. It’s making sure we don’t think all we have to do is turn up, put the kit on and win.’

Carsley has spent time picking over England’s surrender of a two-goal lead in Slovenia, alarmed that both were conceded from set pieces, and suggested it felt like a defeat.

‘I had to keep reminding myself the day after that we didn’t lose. We drew,’ he added. ‘I expect to win every game, every moment of every game.

‘I don’t know how I would’ve felt if Emile Smith Rowe’s chance had gone in and we’d won.

‘Would I have been happy with the second half? Probably not. It was like a hot and cold tap. We were so lively in the first half, so slow in the second.

‘Why? We’ve done a lot of talking about it.’