A British Airways flight from London to Hong Kong turned into a 36-hour ordeal after the plane attempted to land during a typhoon – before being grounded in the Philippines.

What was supposed to be a 12-hour trip turned into a marathon journey for the 100 passengers with the plane first making two failed bids to land in Hong Kong during Typhoon Lionrock before it diverted to Manila 700 miles away.

On arrival in the Philippine capital, it is understood that passengers were told they could not disembark due to Covid-19 travel restrictions and remained stuck on board for 18 hours while it was grounded.

It finally arrived in Hong Kong 22 hours later than expected. Video shows the cabin breaking into choruses of cheers and applause as they touched down – 36 hours after first taking off from London.

It came after Hong Kong authorities issued its third highest storm warning on Saturday, shutting down transport networks, schools and offices as the typhoon lashed the northern South China Sea.

Thirty-six flights were delayed, five were cancelled and three were diverted, including the flight from London, before the storm warning was taken down early on Sunday.

Flight BA031 took off from Heathrow Airport at 7.40pm GMT on Friday and was due to touch down at Hong Kong International Airport at around 2pm Hong Kong time (7am GMT) on Saturday. 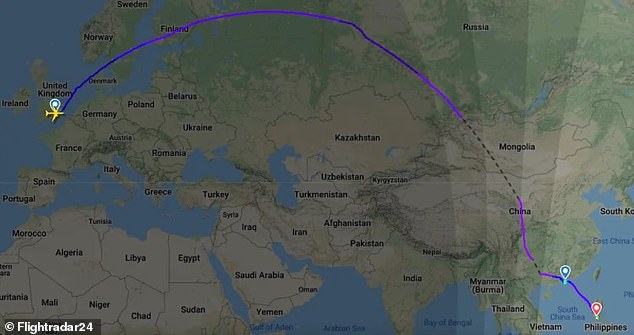 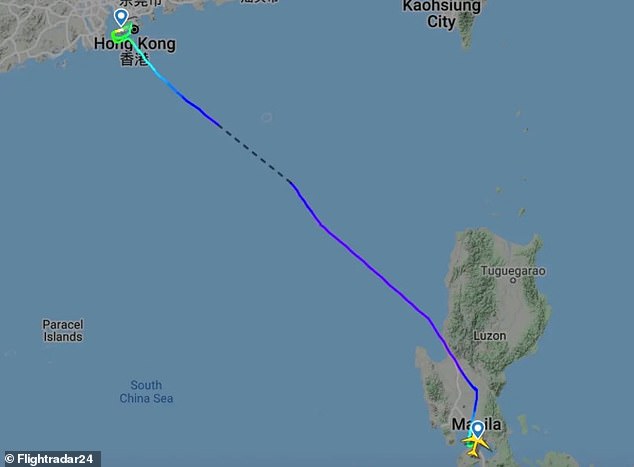 After a diversion to Manila, passengers were forced to spend the night on the plane amid Covid restrictions and eventually took off for Hong Kong again (pictured) 18 hours later 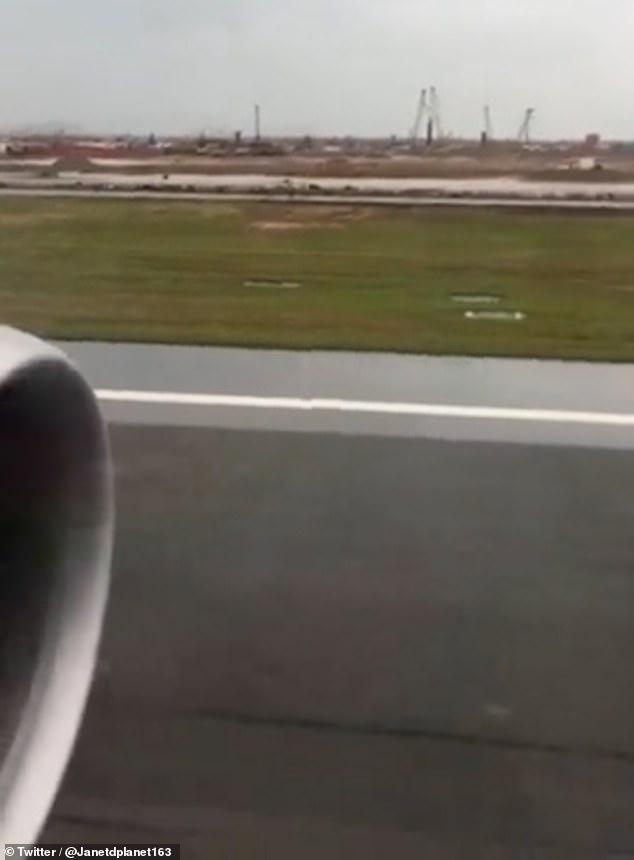 When the flight landed in Hong Kong after a 22-hour delay, a video heard passengers cheering as they were relieved to finally touch down after the 36-hour ordeal

The plane circled above Hong Kong at 2pm (7am GMT) but failed to land twice amid the fierce conditions, which saw one woman killed in Hong Kong on Friday as scaffolding collapsed amid the strong winds.

The plane was then forced to turn towards Manila, the Philippine capital, diverting passengers around 700 miles and landing at Ninoy Aquino International Airport two hours later.

But after the diversion, passengers were understood to be told they could not leave the Boeing 777 due to Covid-19 travel restrictions, so were forced to sit on the plane and wait.

Cabin crew provided food and drinks and offered to inform quarantine hotels in Hong Kong, where many passengers had booked 21-day stays in line with travel restrictions, of the delay.

Passengers and crew were forced to spent the night on the plane as the tropical storm conditions failed to improve, until it finally left for Hong Kong 18 hours later, according to One Mile at a Time.

Nearly two hours later, and after another aborted attempt to land the plane, the plane finally touched down in Hong Kong at around 12pm local time (6am GMT) on Sunday – a staggering 22 hours later than expected.

When the flight finally landed, Janet Walker shared a video on Twitter which saw the passengers cheering and applauding as they were relieved to finally touch down after the 36-hour ordeal. 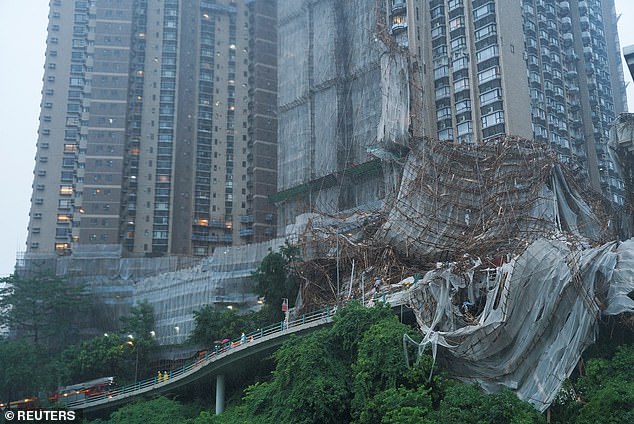 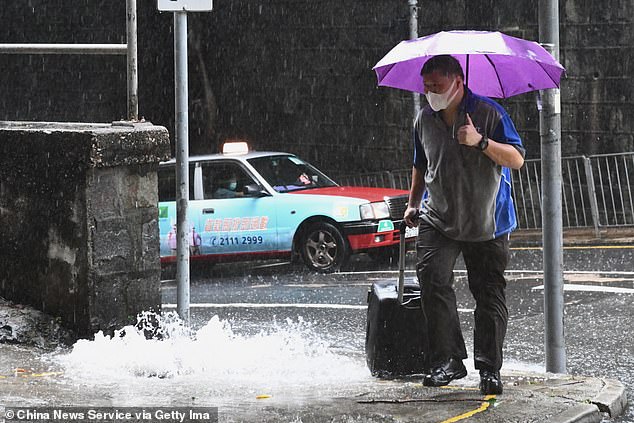 Hong Kong resident Ms Walker, who is in her 50s, said the 36-hour journey was stressful and the diversion to Manila came after two failed attempts to land in Hong Kong amid the typhoon.

She told the South China Morning Post that she was frustrated airline staff could not initially give any more information about the delay, but said passengers were at least able to chat to each other.

The Briton, who was returning with her husband from a trip to Manchester and has now started her 21-day quarantine, said she was eager to get back and make sure the storm had not damaged her home.

In a letter sent to passengers on Saturday, British Airways apologised for the ‘difficult decision’ taken to delay the aircraft’s departure from Manila for 18 hours.

A British Airways spokesperson said: ‘Like other airlines, our flight diverted to Manila due to tropical storm Lionrock, it later safely landed in Hong Kong.

‘We cared for our customers on board the aircraft and apologise for the inconvenience.’

The city’s weather observatory raised its No. 8 storm warning signal at 6.40am (10.40 GMT) local time and said it would likely remain in place through the morning, but it was not lifted until early on Sunday.

Lionrock combined with surging northern monsoon winds and heavy rain on Friday battered the city, and one female construction worker was killed when scaffolding collapsed in the Happy Valley suburb.

Elsewhere, Typhoon Talim made landfall in Kyushu on Sunday, the southernmost of Japan’s four main islands, packing winds of up to 162 kilometres (105 miles) per hour, the Japan Meteorological Agency said. 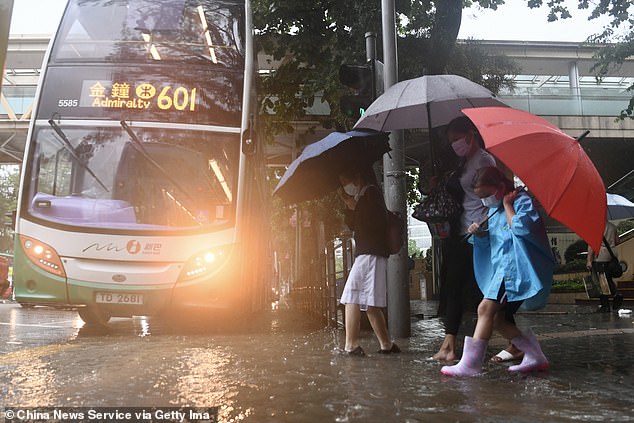 People wade in a flooded street during a heavy rainfall as Lionrock, the 17th typhoon to affect China this year, is heading toward the Hong Kong province of Hainan on October 8 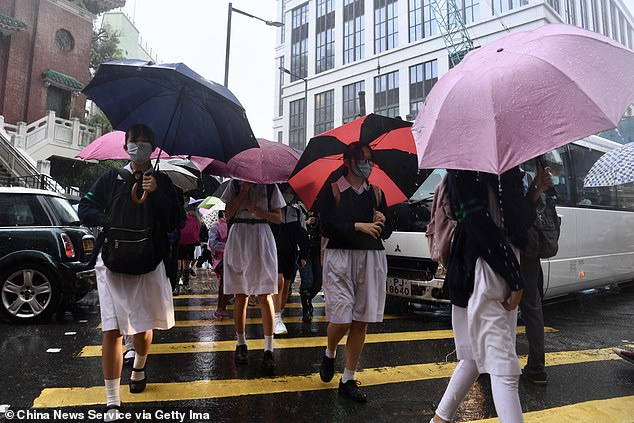 The city’s weather observatory raised its No. 8 storm warning signal at 6.40am (10.40 GMT) local time on Saturday and it was not lifted until early on Sunday

The storm, moving northeast along the country, reached the nation’s northern island of Hokkaido by Monday morning, dumping torrential rain and paralysing domestic transportation on its way.

Public broadcaster NHK said three people were missing in western Japan, and 38 people had been injured in storm-related accidents.

At least 116 domestic flights were cancelled on Monday because of strong winds, and some bullet train services were suspended in northern Japan due to the typhoon, NHK said.

Authorities have issued warnings of rainstorms, high seas, possible landslides and flooding across the nation, as the storm maintained its strength.

The typhoon had battered the southern Okinawan island chain before it hit Kyushu, causing the most rain seen over a 24-hour period in 50 years in the city of Miyako.