Lewis Hamilton insists he was NOT furious with his Mercedes team for poorly-timed pit stop at the Turkish Grand Prix which saw him finish fifth… despite the Briton swearing down the radio at them!

Lewis Hamilton has passionately denied being furious with his Mercedes team for a poorly-timed pit stop at resulted in him finishing fifth at the Turkish Grand Prix.

The Briton was asked to come into the pit lane on lap 42 of Sunday’s race, but refused as he disagreed with Mercedes’ belief that he needed new intermediates.

Hamilton, who had managed to work his way up from 11th to third in the grid, eventually came into pit on lap 50 but dropped two places to fifth with just eight laps to go, which allowed Red Bull’s Max Verstappen to overtake him at the top of the F1 rankings. 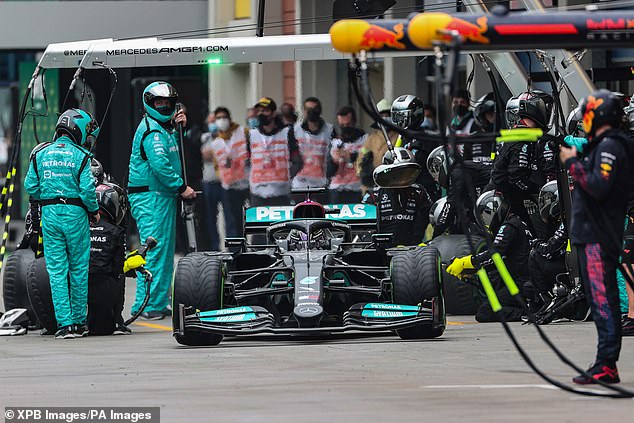 After coming out of the pit lane, Hamilton swore at his Mercedes team on the radio, saying: ‘F***, man, why did you give up that space?’. The seven-time Formula One champion also told his pit wall to ‘leave me alone’ when the race had ended. 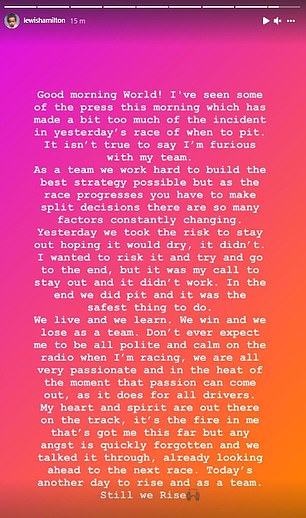 But Hamilton revealed in a social media post on Monday morning that he was not angry at his team, despite his expletive-laden rant at them.

‘Good morning world,’ the post began.  I’ve seen some of the press this morning which has made a bit too much of the incident in yesterday’s race of when to pit. It isn’t true to say I’m furious with my team.

‘As a team we work hard to build the best strategy possible but as the race progresses you have to make split decisions there are so many factors constantly changing.

‘(On Sunday) we took the risk to stay out hoping it would dry, it didn’t. I wanted to risk it to try and go to the end but it was my call to stay out and it didn’t work. In the end we did pit and it was the safest thing to do.

‘We live and learn. We win and lose as a team. Don’t ever expect me to be all polite and calm on the radio when I’m racing, we are all passionate and in the heat of the moment that passion can come out, as it does for all drivers.

‘My heart and spirit are out there on the track, it’s the fire within me that got me this far but any angst is quickly forgotten and we talked it through, already looking ahead to the next race.

‘Today’s another day to rise and as a team. Still we rise.’ 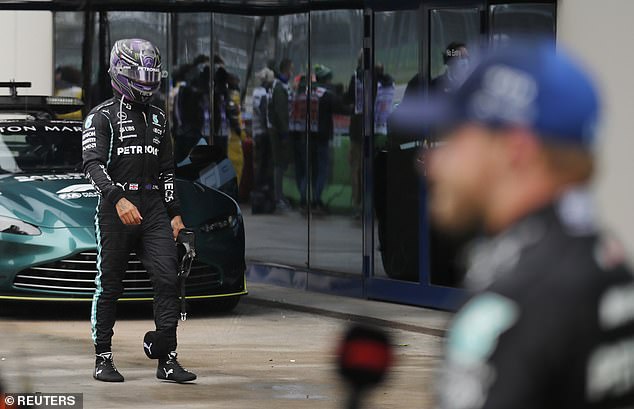 Hamilton first received the call over the Mercedes radio to come in on lap 42 as his team believed that new intermediates were needed to finish the race.

‘Box. Box’ came the race engineer Peter Bonnington’s cry over the radio and when Hamilton asked why, the response he received was: ‘New inters are the way to go.’

‘I don’t think it is man,’ said Hamilton. ‘It feels like we should stay out, man.’

Bonnington replied: ‘We will stay out one more lap to give us a bit more thinking time.’

Hamilton eventually came back in eight laps later and was sitting in third place, though was dropping further behind Verstappen in second place. 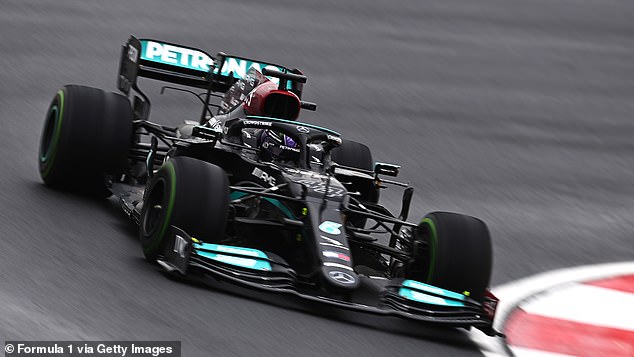 The Mercedes driver came out of the pit lane in fifth, after Sergio Perez and Charles Leclerc had overtaken him, with sixth-place Pierre Gasly making up 20 seconds on Hamilton and was on his tail.

Bonnington replied: ‘It looked like we were going to lose position anyway.’

Hamilton, his anger rising, said: ‘What position am I in, man?’

‘We shouldn’t have come in, man,’ Hamilton roared down the radio. ‘We have got massive graining (on the new tyres). I TOLD YOU!’

Bonnington said: ‘Copy, Lewis, we were losing time to Perez but we will chat about it later.’