There was a day in February this year which painted the perfect picture of the deep lows to which Ipswich Town had sunk.

It came not on the pitch at Portman Road but four miles east at the club’s training base in Rushmere St Andrews.

Fans had thrown 12 flares over fences — setting alight signage and suspending the team’s training session — in protest at the state of their club, which was in freefall.

On the short walk to the stadium from the railway station, there are plenty of reminders of what this club once was, from statues to a timeline of pictures from the glory days which decorates the outside of the stands.

Those days are long gone, of course, and though this is a club that has consistently punched above its weight, the Tractor Boys should be nowhere near the third tier of English football. They hadn’t been this low since 1957 before their relegation fom the Championship in 2019.

The fall through the trapdoor to League One came after more than a decade of poor ownership by Marcus Evans, who bought the club in 2007 after generations of family-run affairs by the Cobbold brewing dynasty.

Initially, Evans was hailed as a saviour, backing a succession of managers in the transfer market. But his investment came in the form of loans and the club was plunged into debts of nearly £100million. 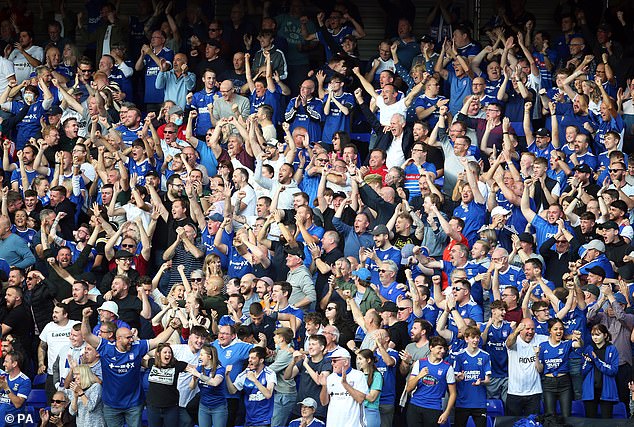 Supply from the once-thriving academy slowed and sales of profitable gems — such as previous big-money departures Terry Butcher, Kieron Dyer and Tyrone Mings — dried up.

In December, then goalkeeping coach Jimmy Walker tweeted his arrogant view on League One. ‘League One is bonkers,’ he said. ‘And dare I say it, very average. If we don’t finish top four minimum we might as well wrap up.’

They finished ninth, marginally better than their 11th-placed position the season before. So those training-ground protests had been brewing for some time. But after years of acrimony, there are signs the brakes have been applied on the club’s descent and slow, forward steps are being made.

Evans wrote off the debt owed to him by the club and sold it to a group called Gamechanger 20 and investment fund ORG, a transaction of around £40m. Manager Paul Lambert left, much to the delight of fans, and was replaced by Paul Cook, who has a stellar c.v. as a serial promotion winner, guiding Chesterfield, Portsmouth and Wigan to such successes.

He came in and delivered a stark message. ‘There’s going to be a lot of pain at the club over the next few weeks,’ he explained at the end of last season. ‘And I’m fully prepared for that pain.’

He stayed true to his words. By the close of the summer transfer window, 20 first-team players had departed. Notable exits included captain Luke Chambers, with just shy of 400 games under his belt at the club, and one-time academy starlet Teddy Bishop, who spent 17 years at Ipswich.

In their place were 19 recruits, 20 if you include singer and club sponsor Ed Sheeran, named as the team’s No 17 on their official squad list.

It would be an understatement to describe this as a ‘clean slate’ for Ipswich, more a team ripping up the guidebook and starting from scratch.

Those coming through the door included Sam Morsy, a regular starter for Championship side Middlesbrough, England youth international Rekeem Harper and dazzling Kosovan midfielder Bersant Celina, once of Manchester City. 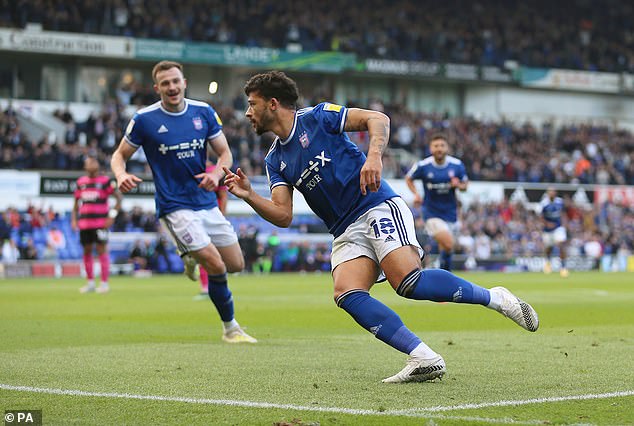 As is often the case with a team boasting so many new faces, their start to the season has been slow. Of their starting XI against Shrewsbury Town on Saturday, every player but one was a summer signing.

One of those, Macauley Bonne, has hit the ground running, with nine goals in 10 games. He scored the winner as Ipswich breezed past a weak Shrewsbury side, after Shaun Whalley had cancelled out Conor Chaplin’s first-half opener.

Scoring goals is not a problem — no team have more than their 21 in League One so far — but only two sides have shipped more goals than Cook’s team. They are 14th in the table, six points off the play-off spots.

Back off the pitch, work has begun to modernise the stadium, with a new mural of club legends. Inspirational messages around the club have been taken down, with just one survivor: ‘Run towards adversity.’

In taking this job, Cook has done just that. He’s arrested the slump but now he must get the Tractor Boys ploughing on a positive trajectory.

Not many people have done so in the last two decades.