Steve Clarke believes his Scotland players will have been boosted from ‘feeling the love’ of the Tartan Army following the dramatic 3-2 World Cup qualifying win over Israel on Saturday.

In a tumultuous Group F encounter at Hampden Park, Scott McTominay’s winner deep into six minutes of added time kept the Scots in second place and with a play-off spot in their own hands ahead of Tuesday’s game away to the Faroe Islands.

The Scotland squad took the acclaim from a sold-out national stadium after the game which, having qualified for the delayed Euro 2020 with a penalty shoot-out win behind closed doors in Serbia, gave the players a feel-good factor, according to Clarke.

‘It was important the other night, not to milk it, that’s not the right phrase, but for the public and the players to have that little moment after the game,’ said the Scotland boss.

‘It was a group of players who qualified for a major tournament after 23 years and they did that in an empty stadium and there has never really been the chance to have that interaction between the players and the supporters.

‘That was the nice thing at the end of the game that we could do that.

‘Obviously we scored a goal after 93 minutes and everybody has that euphoria. But there was still 50,000 in the stadium, they all waited, they believed in the team, they believed we could nick it 3-2 which we did. It was a nice moment.

‘It was good for the confidence, good for the belief and good for them to feel loved. Footballers are no different from anyone else, we all like to feel the love.

‘We are human beings, everybody likes to feel that little bit of adoration and little bit of love. These players have worked hard to do what they have done for their country, I keep saying they want to do well and you see that. 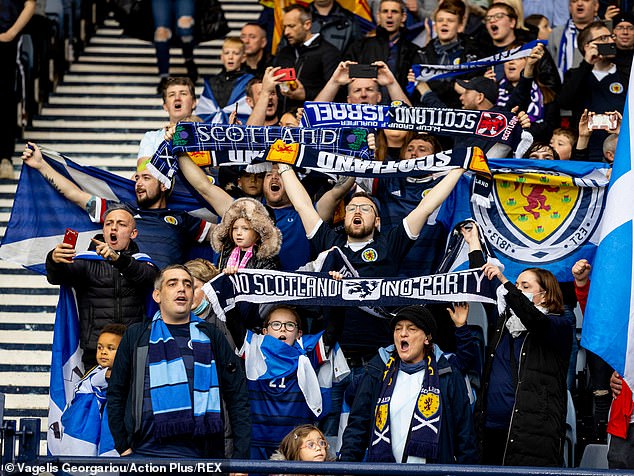 ‘It was a good moment but one we have to park now and get ready for the next tough challenge.’

After seven fixtures Scotland have 14 points, seven behind runaway leaders Denmark and four more than Israel and Austria.

Now there are two away games against the Faroe Islands, second-bottom with four points and having lost 4-0 at Hampden Park earlier in the campaign, and then last-placed Moldova before the final match at home to Denmark.

Scotland have twice drawn in the Faroe Islands, in European Championship qualifiers in 1999 and 2002, but Clarke is only looking forward.

The former West Brom and Kilmarnock boss, who will be without injured striker Che Adams but has defender Grant Hanley available again after suspension, said: ‘It was a big night on Saturday and a big three points but ultimately just another step on the road to hopefully securing second position and getting into the play-offs.

‘It was nice to enjoy it, a good feeling around the camp in the last couple of days but this morning, back focused on a tough game for us in the Faroes.

‘The atmosphere and what we are going to face over there will be different to what a lot of these players have faced before but the historic results don’t matter.

‘What matters is the Faroes now are improving all the time, they qualified out of their section in the Nations League, they can win games, they are well organised.

‘It was only towards the end that we started to get away from them so we expect a difficult game.’