Don’t get carried away. That was Gareth Southgate’s most salient message as he discussed Phil Foden’s wondrous display here in Andorra.

Foden swaggered around the plastic pitch of the Estadi Nacional like he owned the place, running the show from start to finish with a masterful display in a central role that appeared to suit him down to the ground.

Phil Foden was the architect behind England’s 5-0 win over Andorra, controlling the match 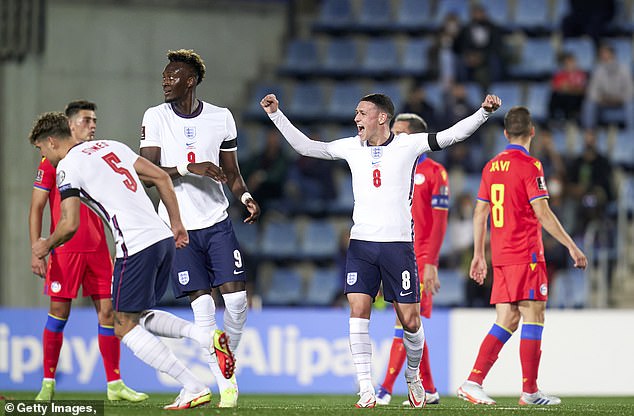 If there was a pass to be hit, sure enough Foden found it. Ping, ping, ping — they all found their targets. The usual caveats apply, of course. Indeed, Southgate won’t have learned too much about Foden against Andorra.

The England manager reads the most into games when his players are pitted against the world’s best opposition.

Ranked 156 by FIFA, Andorra, if we’re being blunt, should not be sharing a football pitch with England. But you can only deal with what’s in front of you — and boy did Foden deal with Andorra. ‘The only thing I am loath to do is put any pressure on him,’ explained the England manager.

‘We’ve known since 15, 16 (years old) what might be possible and we are seeing that. His evolution at his club has been perfect. 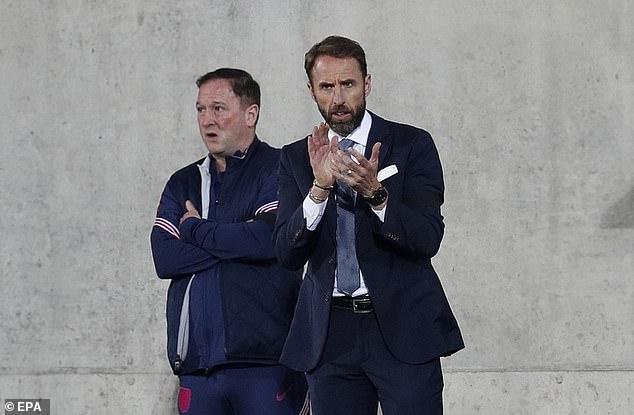 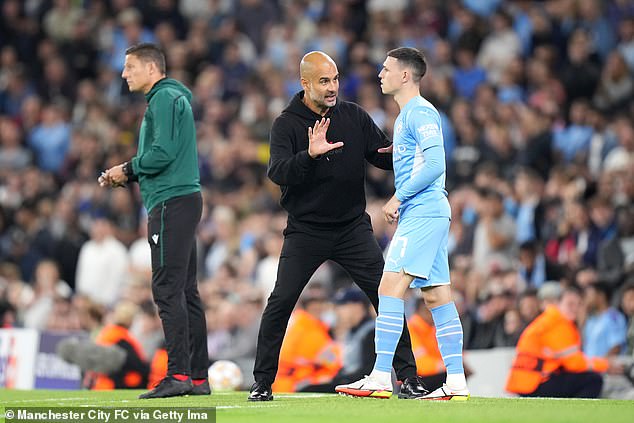 ‘The fascinating part is what his role might be and it could be any one of a number, frankly, because he’s got the ability to play in many different positions.

‘For lots of us, we were probably waiting for him to get established in Manchester City’s team. You have to say that Pep Guardiola has managed that really well. He is flourishing. We know what is possible.’

With Lionel Messi and Cristiano Ronaldo at the end of their spellbinding careers, football is primed for its next superstar. Who is to say Foden can’t wear that crown? Of course, you’d imagine Kylian Mbappe, Erling Haaland — or perhaps even Mo Salah — will have something to say about that.

But you can picture it now, Foden leading Southgate’s youthful England team at next year’s World Cup. Foden will be 22 in Qatar, so he won’t even be at the peak of his powers by that time. 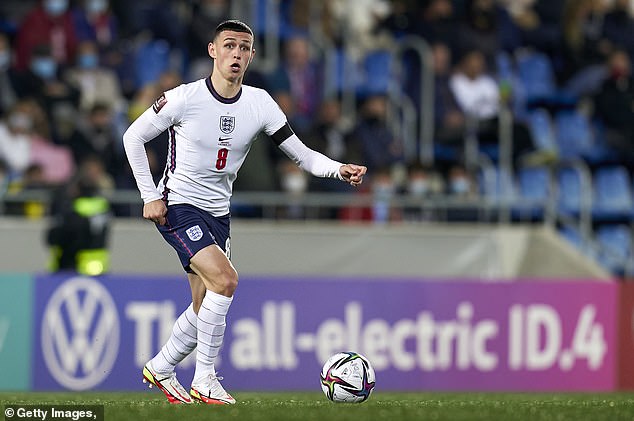 The potential, though, is unquestionable. ‘We’ve got to allow him to progress at the right stage. He’s played a certain opponent here,’ said Southgate. ‘I am not trying to diminish what he’s shown and what’s possible, but I don’t want to create too much for him.

‘The danger is we create too much to live up to. Let us just enjoy him. He is a special player, without a doubt. Let him grow into the team.’

There’s a case to put that Southgate should be building the team around his prodigiously talented midfielder. But with all that said, there are no guarantees Foden will even start against Hungary at Wembley.

The Manchester City midfielder isn’t the only player aged under 25 who Southgate is trying to harness.

Jadon Sancho’s two assists against the Andorrans should provide the 21-year-old with encouragement following a difficult start to life at Manchester United. 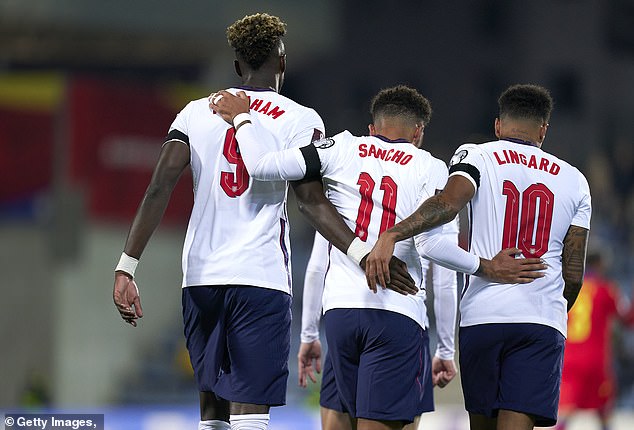 Bukayo Saka’s international career goes from strength to strength, and his third England goal against Andorra gave further indication of his growing influence at this level.

Tammy Abraham’s goalscoring return to international football offered Southgate hope that there are goals away from Harry Kane within his centre forward options.

Mason Mount and Declan Rice, both 22, are already fixtures in Southgate’s first-choice starting XI. And do not forget that Marcus Rashford is still only 23. There are areas of Southgate’s team which are not so youthful. Right backs Kyle Walker and Kieran Trippier will both be 32 — as will vice-captain Jordan Henderson — by the time the World Cup comes around.

But with Liverpool’s Trent Alexander-Arnold and Chelsea’s Reece James around, the right back position should be in safe hands for the best part of a decade.

And in Jude Bellingham, 18, England have the heir to Henderson in the box-to-box midfield role. 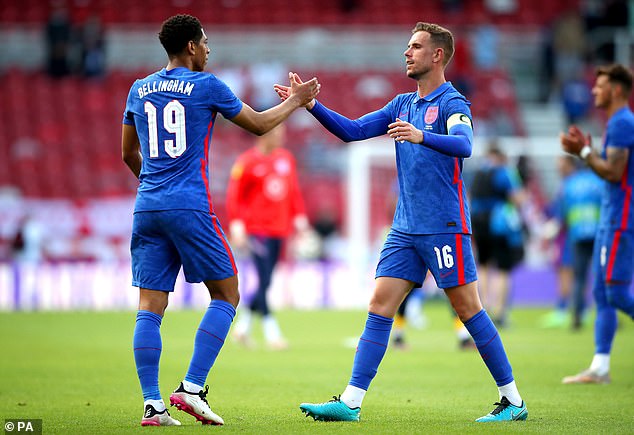 Southgate’s team is evolving beautifully and in Foden they have a player with the magical touch.

Having begun Euro 2020 in the starting XI, the tournament slowly slipped away from Foden.

Southgate has confirmed he was due to start the the third group game against the Czech Republic.

Then the England manager was forced into a rethink after Mount and Ben Chilwell were forced to isolate after coming into close contact with Scotland’s Billy Gilmour, who’d tested positive for Covid-19.

Southgate was not sure Mount would be available for the first knockout game and, because Foden was on a yellow card, the England boss felt he couldn’t take the risk.

Foden didn’t get his place back after that and worse was to come when a toe injury ruled him out of selection for the final. 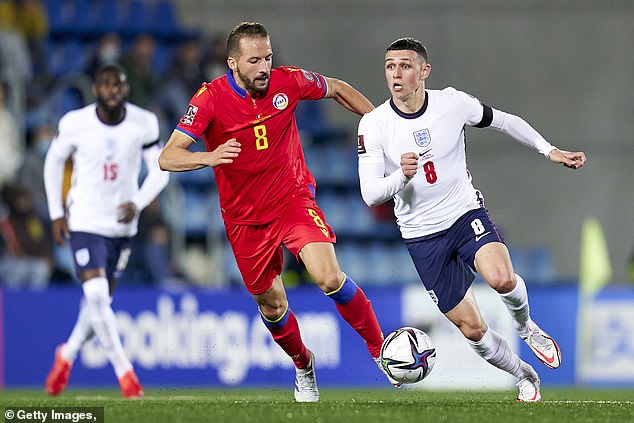 Southgate said: ‘As a dad, you are talking to a 20-year-old kid and you know how much it meant to all those players to be involved in that game (against Italy).

‘So it is heartbreaking when you are sharing a moment like that with a player. It was a big blow for us when he was out of the final.

‘But in football, you have to be resilient. From when they have been 12, 13, they have always been judged, always been assessed. He’s got that toughness.

‘I don’t doubt that is ever going to be an issue for him. He has that in his make-up. Whatever is thrown his way he will be able to handle it.’