Young Dutch football fan, 23, goes viral after he was caught carrying 48 PINTS of beer in one go during top-flight match in Holland

A young football fan in Holland went viral over the weekend after he was caught carrying 48 beers in one go at his side’s top-flight clash on Sunday.

FC Twente supporter Christiaan Roetgering, 23, was captured holding five full cartons of beer stacked one on top of the other for him and his friends, much to the delight of the onlooking fans.

The football fan delightedly revealed he did not manage to spill or drop any of the beers on his way back to his mates, but the youngster did admit that Saturday’s achievement was not a record for the most beers carried at an FC Twente match. 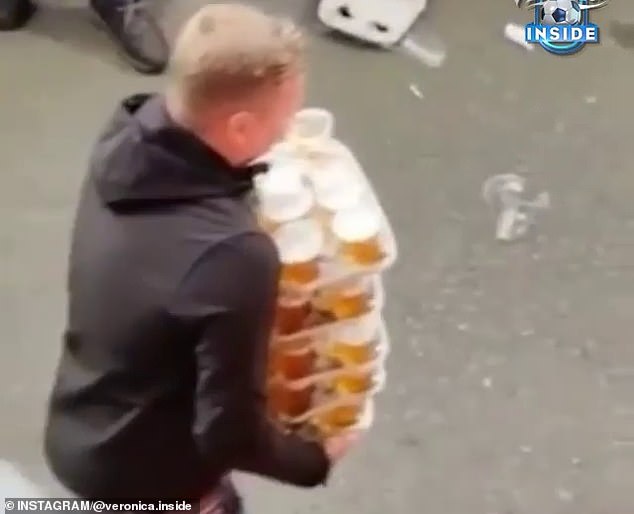 ‘I always go to the game with a group of friends, and each time one of us has the job of getting the beers in,’ Roetgering said, as quoted by The Sun.

‘This time it was my turn, and I didn’t fancy having to keep going back and forth to the bar. So I decided to get everything in one visit.

‘I had to carry the trays through a passageway and up some stairs, but it all went fine. But it’s not a record – my friend Jochen has managed in the past to carry 50 beers in one go.

‘I must have had 300 friend requests on Instagram. I was watching the highlights on TV on Sunday, and my phone just exploded.’

The 23-year-old was cheered on by some of the 30,000 fans present at the De Grolsch Veste arena, with one fan heard shouting: ‘Come on! You’ve got this!’ 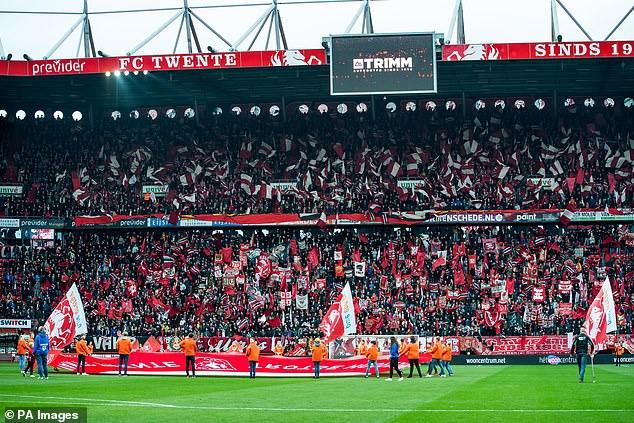 The Twente fan was cheered on by some of the 30,000 fans in the De Grolsch Veste arena

Football fans in Holland are allowed to drink beer in their seats after the Dutch FA lifted a ban on fans drinking alcohol when they are in view of the pitch in 2018. A similar relaxation of the same rule is being considered in England at the moment.

Roetgering was lucky that he was not carrying those beers during an important moment in the match, with Twente’s clash with Willem II a jam-packed encounter in terms of key incidents.

The young football fan’s side took an early lead through Dimitris Limnios’ sixth-minute strike but Che Nunnely equalised for the visitors mid-way through the first-half.

But Twente’s game plan was rocked just as the half-time beer queue was filling up as midfielder Ramiz Zerrouki was shown a second yellow card in the third minute of first-half injury time.

Willem defender Derrick Kohn then received a red card for a second bookable offence of his own but neither side could find a winner before full-time.