By Richard Gibson For Mailonline

England’s bowlers produced a clinical display in their defence of 164 to seal a 13-run World Cup warm-up win over New Zealand in Abu Dhabi.

It was their most potent wicket-taking weapons in Mark Wood and Adil Rashid who once again made the breakthroughs: Durham pace bowler Wood mopped up the tail to finish with four for 23 and Yorkshire leg-spinner Rashid bagged three victims.

But Eoin Morgan, returning to lead the side after sitting out Monday’s loss to India, would have been pleased by the collective effort in the field which neutered the New Zealanders. 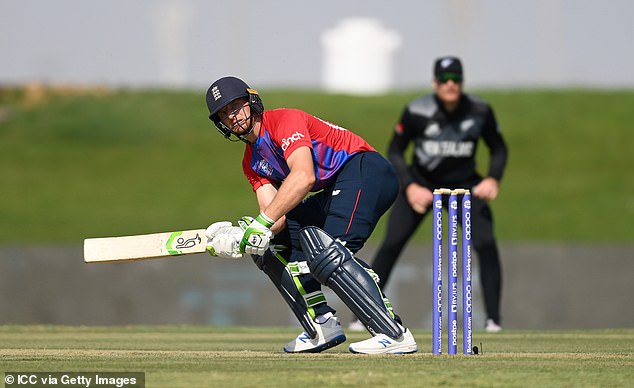 The team they defeated in the 50-over World Cup final two years ago had been cruising at 66 for one in the seventh over after Martin Guptill towered Rashid for his third six, but a miscue next ball began a rapid demise.

Just as Jos Buttler had earlier with a powerful 73 from 51 deliveries, Guptill provided the bulk of the runs with a rapid 41 but in contrast to England, New Zealand could not add any other significant contributions.

Liam Livingstone’s golden arm did for Devon Conway – run out by a powerful throw from the deep – and then catalysed the Black Caps’ implosion around the scheduled midpoint of the innings. 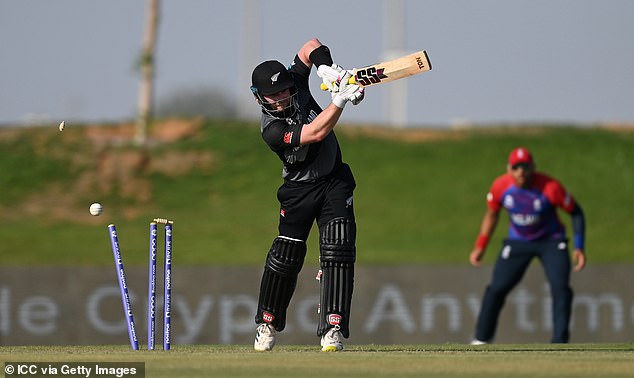 New Zealand were 86 for three after 9.2 overs but Livingstone’s spin mixture cost just one run for the loss of Glenn Phillips, caught behind cutting at a leg-spinner, over the next four deliveries.

When Chris Jordan scooped up a fine reflex catch low at slip next ball, after left-hander Mark Chapman’ uncertain jab at a googly from Adil Rashid ricocheted a chance off Buttler’s knee, they were 87 for five.

And a spell of three wickets in four balls was complete when Mitchell Santner fatally played back to Rashid’s conventional leg-spinner.

Wood, who earlier castled Tim Seifert with the new ball, then returned to add the scalps of Daryl Mitchell, Tim Southee and Kyle Jamieson as the late order struggled to cope with deliveries slammed into a sluggish Tolerance Oval surface. 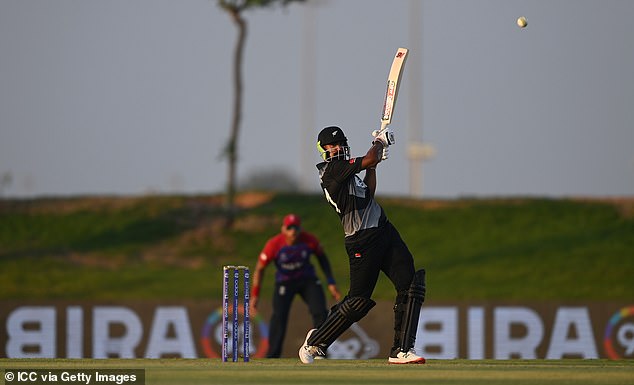 However, Ish Sodhi and Todd Astle put on a 47-run partnership to give England a scare 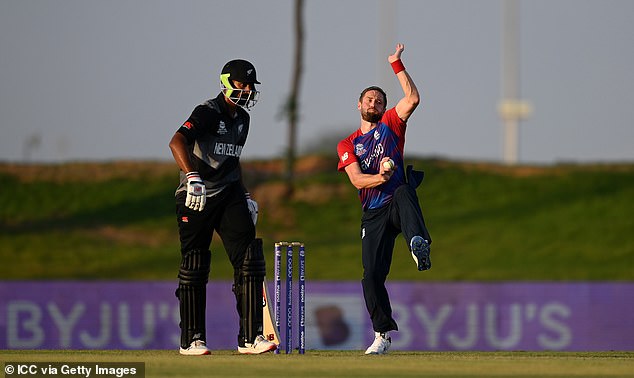 An entertaining 47-run stand for the final wicket, which got interesting when number 11 Todd Astle cleared his front leg to slam Jordan into the stand at long-on, threatened a heist.

But after conceding just one of the 15 runs New Zealand required from the first ball of the final over, Chris Woakes clipped Astle’s leg stump with his second to seal victory.

Morgan could not shake his underwhelming form which plagued the latter stages of the IPL, falling in the same manner as Dawid Malan, England’s other batting concern ahead of the opening clash with West Indies on Saturday. Both left-handers were pinned leg before by Ish Sodhi, having each contributed double figures at slower than a run a ball.

So it was left to Jonny Bairstow and Sam Billings, who struck 19 of the 20 runs Jamieson conceded in the penultimate over, to power England to a defendable score following Buttler’s typically aggressive start to proceedings.