Soldiers from the Queen’s Dragoon Guards were taking part in a UN mission near the village of Menaka, in the east of Mali, when they got into a gun fight with two suspected ISIS militants riding a motorbike on Wednesday morning.

The men crashed their bike as British troops chased them in open-topped Jackal vehicles, before opening fire with an AK-47 and a Soviet PKN machine-gun.

UK troops then fired back with .50 calibre machine-guns and grenade launchers during a 20-minite firefight that left the two suspected militants dead. 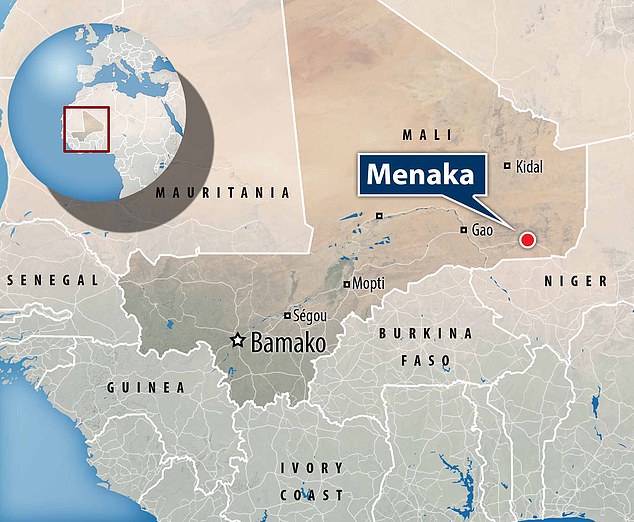 Members of the Queen’s Dragoon Guards were taking part in a reconnaissance mission near the town of Menaka, in eastern Mali, when they got into the firefight

No British forces were injured, though one of the vehicles was damaged.

Major Gavin Hudson said the troops were taking part in a reconnaissance mission from Menaka to the nearby village of Indelimone, trying to find a new route between them after regular routes had come under continual attack by militants.

British forces were several miles from the nearest road, driving through dunes and desert scrubland, when they crested a mound and spotted the two men.

The men attempted to flee on their motorbike, but crashed it and then ran on foot. UK troops got out of their Jackal vehicles and gave chase.

Major Hudson told The Sun that UK forces were intending to detain and interrogate the two men, but before that could happen they opened fire.

British troops quickly retreated back to the Jackals and continued to the chase, returning fire with ‘every weapon available’.

After 20 minutes, both of the suspected militants had been killed.

‘I am quite surprised that two guys with small arms decided to take on all the British vehicles, but maybe they felt they had no choice,’ Major Hudson said.

The last time British forces shot and killed enemy combatants was in Afghanistan in 2014, before Camp Bastion in Helmand province was handed over to US forces and combat troops were withdrawn from the country.

British troops are on deployment in Mali as part of a UN peacekeeping mission, which is widely considered the global body’s most-dangerous. 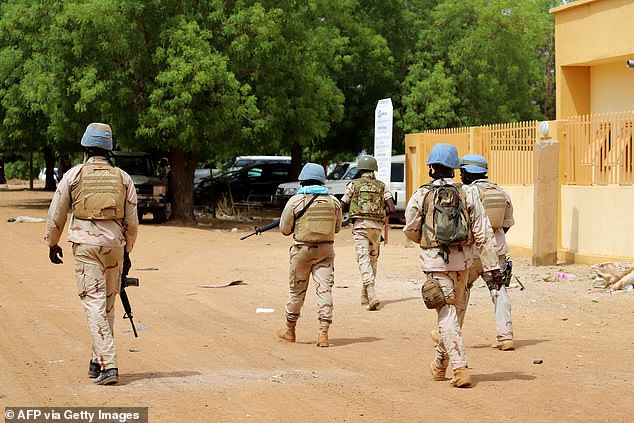 British troops are on deployment in Mali as part of a UN mission that has been ongoing since 2013, and is widely-considered to be the agency’s most-dangerous

UN forces have been in the country since 2013, when they were initially deployed to stabilise the country following the 2012 Tuareg rebellion – led by ethic Tuareg groups accused of having links to Islamist groups.

But it has since expanded into a wider terrorist-fighting mission after ISIS established a presence in the wider region, known as the Sahel, after the fall of its so-called Caliphate in the Middle East.

France is fighting a separate counter-insurgency mission in the same region, Operation Barkhane, that began in 2014 and has seen 42 of its troops killed.

On Thursday, French soldiers said they had killed the commander of a group with links to al-Qaeda which operates along Mali’s border with Burkina Faso.

Nasser Al Tergui was the number two in the Gourma-Serma brigade of the Support Group for Islam and Muslims (Jamaat Nasr al-Islam wal Muslimin), the French statement said.

Al Tergui, who joined Al-Qaeda in the Islamic Maghreb in 2012, had ‘major operational responsibilities’ in the support group.

‘He was notably specialised in planting improvised explosive devices’, according to the statement.

His death ‘will reduce the capacity to cause harm of an armed terrorist group known for carrying out attacks against local forces and numerous acts of violence against the local population,’ it added. 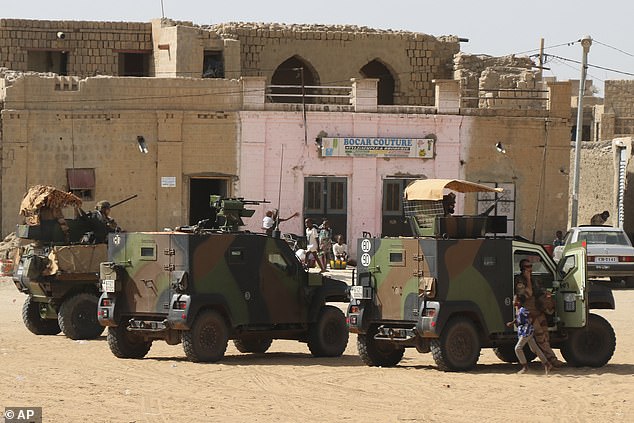 French troops (file image) are also deployed in the same region on a separate anti-terror mission, and on Thursday claimed to have killed a terrorist commander affiliated with al-Qaeda

A drone spotted a vehicle believed to be carrying Al Tergui and five other members of the brigade about 100 kilometres (60 miles) northwest of Gossi on October 15.

The following day an operation was launched to intercept the vehicle, which refused to stop.

‘Two air strikes were unleashed, the vehicle destroyed and the five occupants neutralised,’ the army said.

Meanwhile presumed jihadists kidnapped five civilians in southern Mali, security sources said, a rare abduction in an area that has been largely spared the violence convulsing much of the landlocked African nation for nearly a decade.

The five people were seized by ‘terrorists on motorcycles in Blendio in the Sikasso region during the night Wednesday to Thursday,’ one security source said on condition of anonymity for safety reasons.

Another security source confirmed the incident and a local official said that between 11 and 17 kidnappers were involved in the attack that happened shortly before midnight.

Kidnappings have been common in Mali since the country was plunged into turmoil in 2012 when an insurgency first erupted in the north. But abductions are rare in the south, which has largely been spared the violence.

Mali’s interim government this week entrusted its religious affairs ministry with talking to jihadist groups, a policy fiercely opposed by former colonial power France, but that is seen by many Malians as one of the few ways to end the violence that has killed thousands and displaced hundreds of thousands more.