Telecoms giant BT was on the rise as it bolstered its defences against a possible takeover bid.

It has appointed Robey Warshaw, an advisory firm that employs former Chancellor George Osborne, ahead of a December 10 deadline after which Altice, a French telecoms firm run by billionaire Patrick Drahi, will be released from a commitment not to try to take over BT.

Altice has a 12.1pc stake in the group, valued at around £1.7bn. It made the commitment when investing £2bn in BT in June in return for its stake. However, under UK rules such statements are only binding for six months.

Robey Warshaw has a strong pedigree in navigating corporate takeovers, having previously been involved in Pfizer’s aborted bid for AstraZeneca in 2014 as well as the £30bn acquisition of Sky by US media giant Comcast in 2018.

Any takeover moves by Altice would come at a sensitive time for BT, which is undergoing a major shake-up at board level with chairman Adam Crozier, former boss of ITV and Royal Mail, due to join at the start of December.

Any move on BT, particularly one connected to its broadband business, may also draw the attention of Government ministers due to its key role in the expansion of fast fibre internet. The news sent BT’s shares shooting 6pc, or 8.05p, higher to 143.25p. 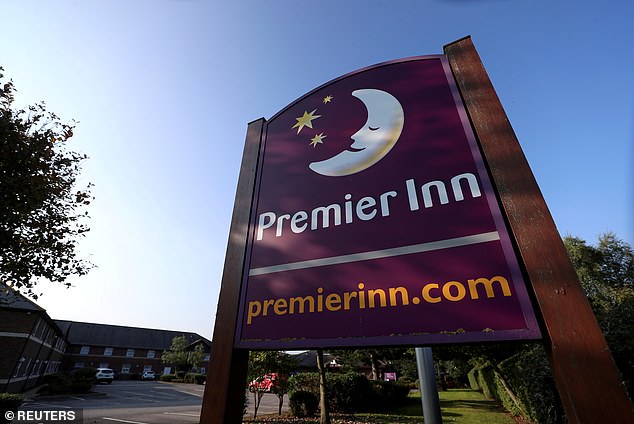 Premier Inn owner Whitbread climbed 4.4pc, or 138p, to 3293p after a stronger-than-expected recovery following the end of lockdown

One such mover was Premier Inn owner Whitbread, which climbed 4.4pc, or 138p, to 3293p after a stronger-than-expected recovery following the end of lockdown. Its UK business saw ‘very strong’ demand after May 17, when leisure stays in hotels were once again permitted, with accommodation sales in August 10.5pc ahead of pre-pandemic levels compared to nearly 61pc lower in the first quarter of 2021 and down 9.6pc in the second. 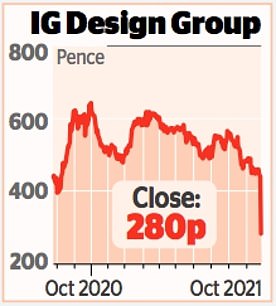 Greeting card and wrapping paper firm IG Design lost a third of its value after warning that supply chain disruption and rising costs were hitting profits. Revenues were up 11pc year-on-year in the six months to October.

However, IG said growth had been dented by logistical challenges as well as soaring costs of freight, labour and raw materials. As a result, full-year earnings were expected to be ‘significantly below’ expectations, with challenges caused by supply chains and cost inflation expected to continue into next year. The shares fell 36.5pc, or 161p, to 280p.

The rebound was echoed in results from Heathrow airport, which had ‘strong pent-up demand’ in the three months to October after testing rules for air passengers were simplified. Optimism lifted British Airways owner IAG 2.3pc, or 3.6p, higher to 159.94p while Intercontinental Hotels, the owner of Holiday Inn, was up 2.4pc, or 1.6p, at 69.39p.

The acquisition of R&M’s solutions division, which manages around £42bn in assets, will increase Schroders’ assets under management to over £750bn. R&M rose 22.5pc, or 53p, to a 20- month high of 289p. Essentra, a maker of fasteners, knobs and plastic caps, jumped 4.6pc, or 12.5p, to 286p after unveiling plans to review options for its filters division to simplify the company.

It wants to focus solely on its components business, which delivered 28.5pc revenue growth year-on-year in the third quarter. Meanwhile, mid-cap IT company Softcat dipped by 1.5pc, or 30p, to 1988p as it warned that a restart in business travel and events next year will ‘create a significant headwind’. The bleak outlook overshadowed record results for the year to August, with profits jumping 27.4pc to £119.4m.