The fallout of Quinton de Kock’s refusal to take the knee ahead of South Africa’s T20 World Cup game against the West Indies continues to rumble on, less than 24 hours after the contentious decision.

De Kock sensationally pulled out of the Proteas match – which they won by eight wickets – when the South African board told their players ‘to adopt a consistent and united stance against racism’ and take a knee ahead of every match.

And on Wednesday, South African newspaper The Citizen summed up cricket’s racial politics – especially there – with the headline: ‘Cricket on its knees’. 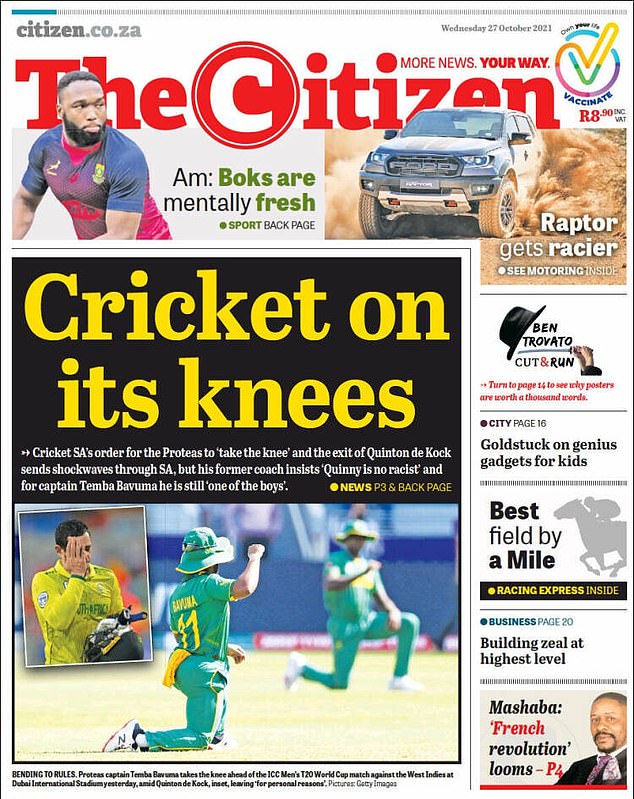 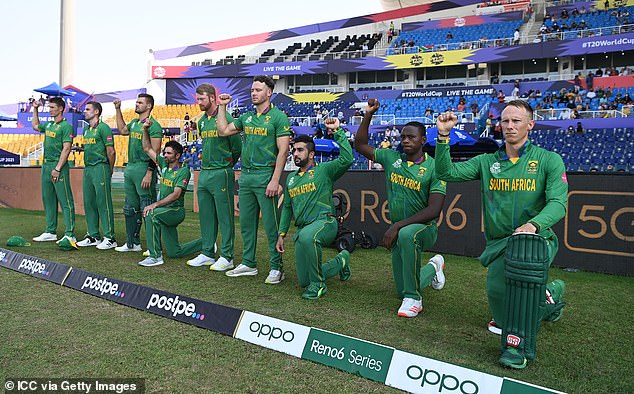 They report that De Kock’s decision sent ‘shockwaves through South Africa’ but he still has the support of captain Temba Bavuma who says he remains ‘one of the boys’.

De Kock’s former coach also insists that ‘Quinny is no racist’, despite his decision not to partake in the kneel.

De Kock – his side’s opener, wicketkeeper and best batsman – decided during the coach journey to the Dubai International Cricket stadium that he would not join in, effectively ruling himself out of the match, and possibly the tournament.

On Tuesday night, there was even speculation that, at the age of 28, he had represented his country for the last time.

And according to a report in Australia, De Kock could turn his back on his country to play in the Australian Big Bash League. It has been claimed that one franchise has already reached out to his management to see if he would be interested in representing them.

When asked about that possible scenario, Australia opener David Warner said De Kock’s presence would be great for the competition. 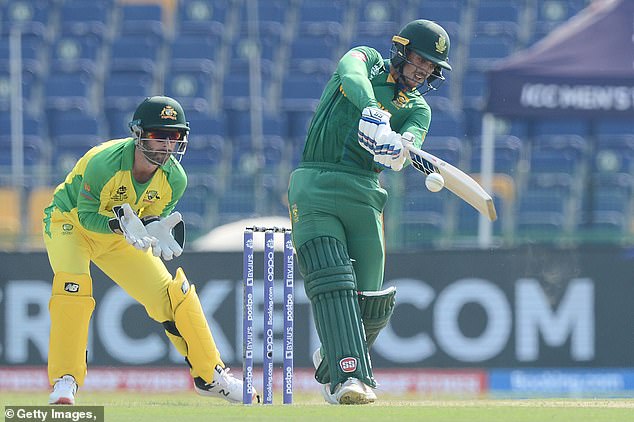 ‘That’s fast. Is that predicting he will leave South Africa?,’ as reported by Nine.com.

‘Obviously that would be great for the Big Bash. If the opportunity was there for him I’m sure he might take that.

‘There’s obviously a lot of other leagues around the world that other South African players are participating in. It would be good for any international player to come down to Australia and participate.’

Warner isn’t the only one to have spoken out about De Kock’s political stance, with many sharing their thoughts on the matter.

Bavuma admitted it had been ‘one of my toughest days to deal with as a captain’, but added: ‘Quinton is an adult. You have to respect his decision, whether you agree with it or not. I can’t force others to see things the way I do, and neither can they force me.’ 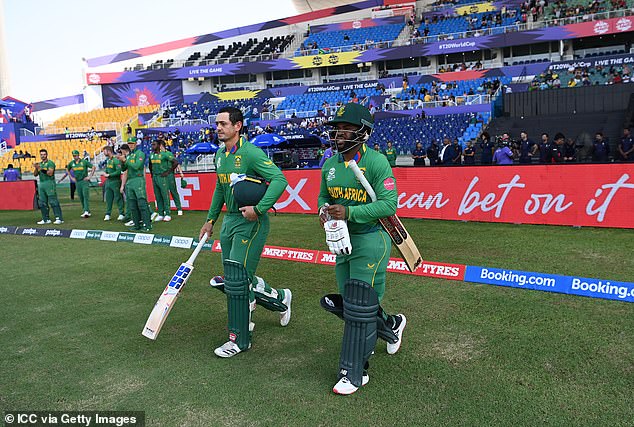 West Indies captain Kieron Pollard, an IPL team-mate of De Kock’s at Mumbai Indians, appeared unaware of the day’s events but said taking a knee was ‘something we feel strongly about as a team and as a people’, adding: ‘We will continue to do it. Everyone has their own opinions on it. Education is the key.’

In the commentary box, former Zimbabwe seamer Pommie Mbangwa could not hide his disappointment. ‘Excuse me for being political,’ he said, ‘but I cannot shed my skin.’

Fellow commentator Daren Sammy, a former West Indies captain, was also dismayed, saying: ‘There are other issues affecting the world but I don’t understand why it is so difficult.’

In a statement Cricket South Africa said they will assess how to handle the situation after gathering all the relevant information. 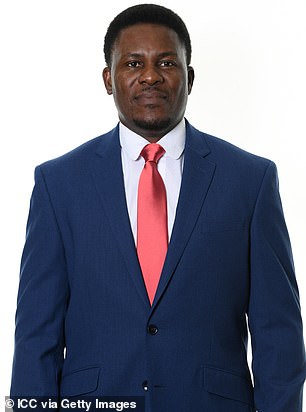 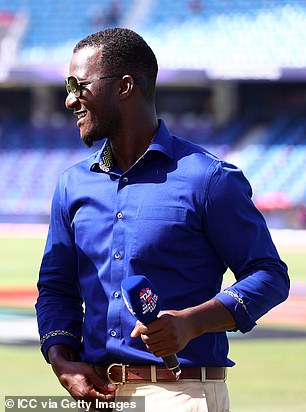 ‘Cricket South Africa has noted the personal decision by South African wicketkeeper Quinton de Kock not to take the knee ahead of Tuesday’s game against the West Indies.

‘The Board will await a further report from team management before deciding on the next steps. All players are expected to follow this directive (to take the knee) for the remaining games of the World Cup.’

However, Cricket South Africa’s viewpoint wasn’t met with the full support of everyone as ex-England captain Michael Vaughan condemned their position.

‘Surely it’s down to the individual to decide whether he or she wants to be involved in any movement,’ he wrote on Twitter.

‘A cricket board should request players to do it but if that individual decides they don’t want to it should not stop them playing the game of cricket.’

Meanwhile, West Indies all-rounder Carlos Braithwaite could see both sides of the argument calling it a ‘watershed moment’.

‘I know Quinton de Kock quite well and I have never felt any bad blood or bad vibe from him,’ he told the BBC.

‘I’m not an advocate of forcing anyone to do something that they don’t want to do. But I also understand where Cricket South Africa is coming from, this is a watershed moment for the Black Lives Matter movement.’ 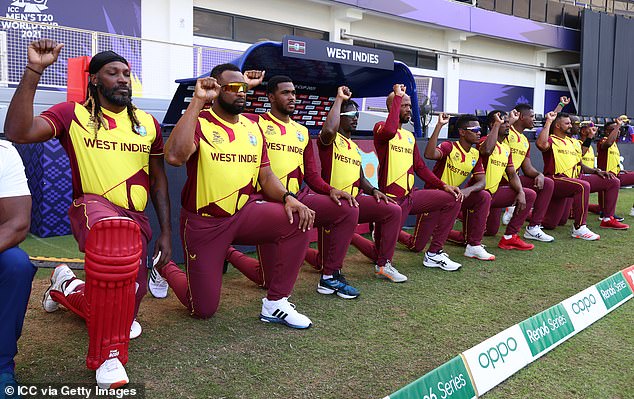