Two thirds of French people think white, European, Christian populations are being ‘threatened with extinction’ by immigration from Muslim and African countries.

Sixty per cent of French people said such a scenario will ‘definitely’ or ‘probably’ play out in the country when asked by pollsters, who published the results last week.

The question was posed ahead of next year’s election, where Emmanuel Macron is almost certain to face off against one of two right-wing candidates: Marine Le Pen or Eric Zemmour.

Two thirds of French people believe that ‘European, white and Christian’ populations are ‘under threat of extinction’ by Muslim immigration from Africa, a poll has found (file) 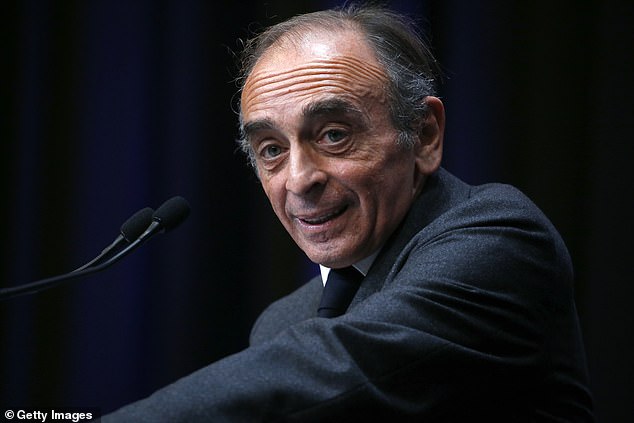 The poll was conducted to test belief in the idea of a ‘Grand Replacement’, a concept touted by Eric Zemmour – a right-wing pundit who could face off against Macron in next year’s election

Central to Zemmour’s ideology is the idea of ‘The Great Replacement’, a theory put forward by Renaud Camus that argues Christian civilisation is being intentionally replaced using Muslim immigration from Africa in a plot by global capitalists.

The poll, carried out by Harris Interactive, aimed to test whether or not voters believe in the concept – despite it being widely panned by experts.

The question voters were asked, based on Camus’s definition, was: ‘Some people speak of the “great replacement”: That European, white and Christian populations are being threatened with extinction following Muslim immigration, coming from the Maghreb [northern Africa] and black Africa. Do you see such a phenomenon?’

It found that 61 per cent of French people believe the phenomenon could happen in France, with 27 per cent saying they are ‘certain’ it will take place.

Just 39 per cent of people said it ‘probably’ or ‘definitely’ won’t happen.

Of those who said it ‘definitely’ or ‘probably’ will happen, support for the idea was roughly evenly split across all age groups and across genders.

However, it varied widely depending on political affiliation.

More than 90 per cent of supporters of Le Pen’s RN party believed it was a likely scenario, while just 30 per cent of Green said the same.

Perhaps worryingly for Macron, 52 per cent of his own party’s supporters believed it was a likely scenario.

A follow-up question asked whether French people were ‘worried’ or ‘not worried’ about the idea of a ‘Great Replacement’.

This found even more people – 67 per cent – were worried about the idea, compared to just 33 per cent who were not. 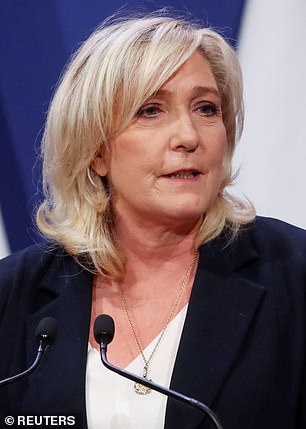 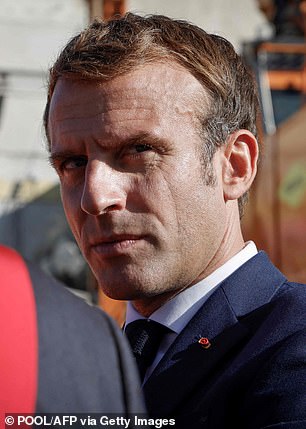 Polls have suggested for years that Marine Le Pen (left) will be the one to take on Emmanuel Macron (right) for the French presidency, but Zemmour could now best her

The issue of migration and its impact on French identity is set to become a key theme of the upcoming election, as Zemmour – who has yet to declare his candidacy – threatens to usurp Le Pen for the chance to taken on Macron.

Zemmour – a notorious figure in France for his anti-Islam and anti-migration views that he espouses in essays and on his TV new show – is now polling higher than Le Pen in some opinion polls ahead of voting in April next year.

By contrast, Zemmour sits openly on the far-right – declaring that suburbs of Paris are being ‘colonised’ by Muslim migrants with large families that he says will make up the majority of the population by the middle of the century.

Statisticians say this argument is deeply flawed, but polls show that his arguments are cutting through with voters.

He also has two convictions for hate speech, including stating during a broadcast that that France is being ‘invaded’ by Muslims and must give them an ultimatum: ‘Choose between Islam and France.’

France’s swing to the political right comes after a string of terror attacks that has seen voters demand politicians take a tougher stance on extremism.

Teacher Samuel Paty was beheaded at a school near Paris last year after showing students a cartoon of the Prophet Mohammed to students, just weeks before a second attack in Nice cathedral killed three.

In the wake of Paty’s murder, Macron took a noticeably harder line on Islamic extremism – declaring that France would ‘neve give up’ expressing free speech including drawing Mohammed pictures.

That prompted mass demonstrations in many Muslim-majority nations, led by Turkey’s President Erdogan who denounced the comments.