By Lizzie Kelly For The Daily Mail

Cheltenham’s November meeting starts on Friday and with trainers beginning to roll out their big guns jumps racing is well and truly centre stage.

I may no longer be a jockey but I am still heavily involved in the sport, riding out almost every day and going to the track for media work. I am looking forward to sharing my opinions with Racemail readers throughout the season.

MY DROGO TO THRIVE

The horse I am looking forward to seeing most at Cheltenham later this week is My Drogo, trained by Dan Skelton, in the two-and-a half- mile novice chase on Friday.

He won the Grade One Mersey Novices’ Hurdle in April and has the physique to really thrive over fences.

Coincidently, the only horse to beat My Drogo, I Am Maximus, makes his hurdling debut at Exeter (1.10).

Dan Skelton’s Allmankind looked exceptional when winning the Old Roan Chase at Aintree last month, bouncing back from being beaten in last year’s Arkle Novices’ Chase. He should continue to improve as he learns to relax more in his races.

The team of trainer Colin Tizzard looks to be in better form. It was encouraging to see Eldorado Allen, who was a bit of a bridesmaid last season, win last week’s Haldon Gold Cup at Exeter.

SHISHKIN: Nicky Henderson’s chaser has huge horseshoes to fill after the retirement of stablemate and dual Queen Mother Champion Chase winner Altior. But he was imperious when winning the Arkle in March and followed up in style at Aintree a few weeks later. His potential clash with Chacun Pour Soi in next month’s Tingle Creek Chase at Sandown will be tasty.

BRAVEMANSGAME: It didn’t quite work out at Cheltenham and Aintree for the gelding trained by Paul Nicholls but he is a Grade One winning novice hurdler whose jumping was fantastic when he made his chasing debut at Newton Abbot. He has stacks of potential.

BRAVE KINGDOM: Nicholls has inherited some talented horses from fellow trainer Harry Whittington and this one caught the eye at Chepstow last week, romping home in a maiden hurdle.

HERMES BOY: A horse I bought and really like who is trained by my mother Jane Williams. He showed bags of promise when second to I Like To Move It on his hurdling debut at Worcester last month and the form looks even better after the winner followed up by landing another novice hurdle at Cheltenham last month. He runs at Bangor this afternoon.

LEADING CHOICE: A horse I have ridden quite a lot at the Somerset stable of Nicky Martin. He won a Bumper at Ffos Las last month and he will be even better when he eventually goes over hurdles.

GLADIATEUR ALLEN: A good winner at Ascot last season and ran well in a hot Sandown race. Another trained by my mother, the ground was terrible when he made his seasonal comeback at Ffos Las when they went slow and he pulled too hard. He has a great engine and lots of promise.

Going into the jumps season it is difficult to ignore the shamrock-clad elephant in the room. Ireland delivered a ‘green wash’ at the 2021 Cheltenham Festival, beating the home team 23 wins to five and leaving many over here debating what had gone wrong. It won’t get much easier this season either given the Irish remain so strong. 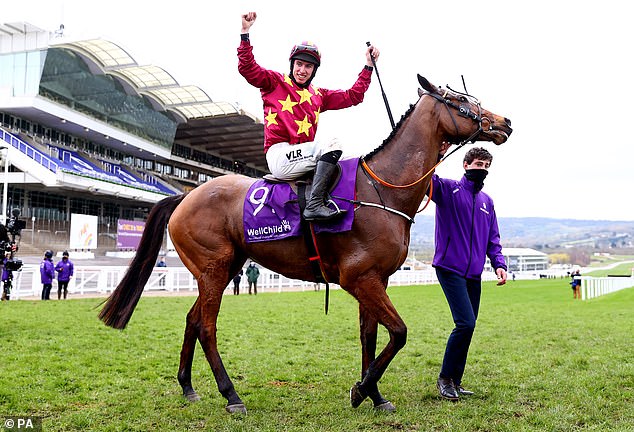 This is going to take some turning around and a serious revamp of the programme in Britain is needed.

There are too many options to run, especially for the chasers, providing escape routes to avoid rivals and too many soft races. In contrast, less racing in Ireland means competitors have to clash more. They get battle-hardened, which can prove a big factor when the pressure is on at the Festival.

On Sunday, Nicky Henderson’s Chantry House, one of the big British hopes for the Gold Cup and King George VI Chase, beat a single rival at Sandown. He strolled home and would have had to work harder on the gallops. If we want to turn things round we have to be brave and make radical decisions about how our season is constructed.