Germany’s Angela Merkel made an embarrassing faux pas on Wednesday when she tried to fist-bump Denmark’s Queen Margrethe II, but was left hanging by the royal.

The German chancellor had rolled out the red carpet for Queen Margrethe’s arrival in Berlin, with the royal visiting the country with her son Crown Prince Frederik.

As the 81-year-old queen stepped out of her limousine outside Berlin’s Chancellery wearing a lilac dress, Merkel stepped forward to greet her.

Pictured: Germany’s Angela Merkel (right with her fist raised) made an embarrassing faux pas on Wednesday when she tried to fist-bump Denmark’s Queen Margrethe II (left), but was left hanging by the royal outside the Chancellery in Berlin on Wednesday

But Queen Margrethe appeared taken aback when the outgoing Chancellor uncharacteristically extended her fist, offering a rather informal fist bump.

The Danish royal paused before placing her palm on her chest apologetically, signalling to Merkel that she would not be participating in the greeting which could be considered unbecoming for a queen.

In footage of the awkward exchange in front of a press pack, Merkel is seen also raising her hand to her chest as if to apologise to the royal, before turning to greet Crown Prince Frederik, who had followed his mother out of the car. 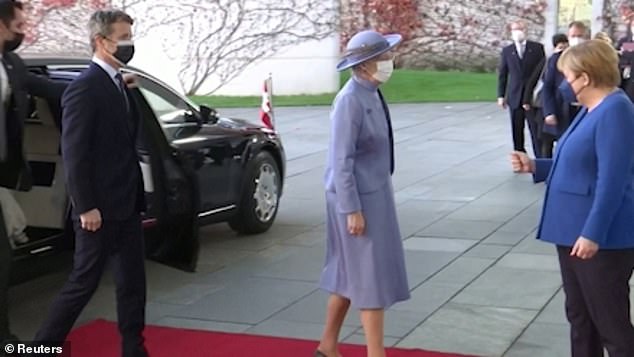 As the 81-year-old Queen Margrethe (centre) stepped out of her limousine outside Berlin’s Chancellery wearing a lilac dress, Merkel stepped forward to meet her (right) 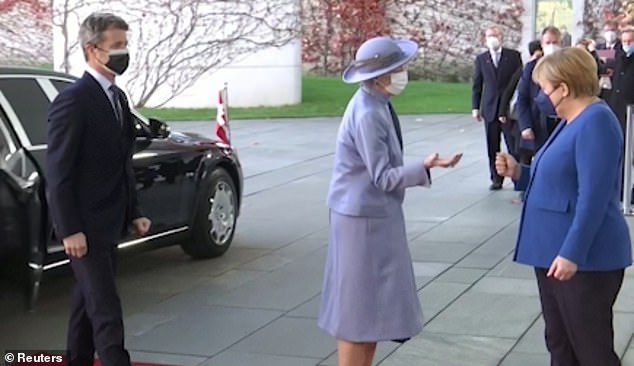 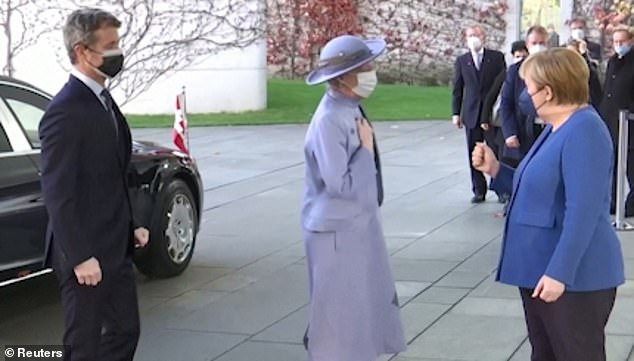 The Danish royal placed her palm on her chest apologetically, signalling to Merkel that she would not be participating in the greeting which could be considered unbecoming for a queen, leaving the out-going German leader holding her fist out

The masked trio then walked down the red carpet, and despite the faux pas were shown to be in good spirits as they had their photographs taken.

Queen Margrethe of Denmark, known as ‘Daisy’ to family and subjects alike, met with Merkel on the first day of a four-day visit to Germany.

The country’s are neighbours and close allies, and have strong ties politically and economically. The royal will be taking part in remembrance events, among other visits.

The fist-bump-gone-wrong came before a walk through Berlin’s famous Brandenburg Gate that is customary for state visits.

In front of the Neue Wache, a memorial for the victims of war and tyranny, the royal and her son laid a wreath.

Earlier, the queen and her son, 53, were greeted with military honours by Federal President Frank-Walter Steinmeier earlier at a Berlin park on Wednesday. The group watched an armed force’s formation, before withdrawing for talks. 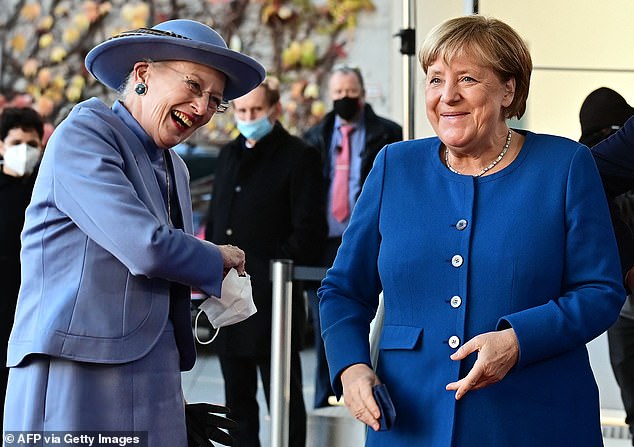 Despite the faux pas, Denmark’s Queen and Merkel were shown to be in good spirits as they had their photographs taken further down the red carpet 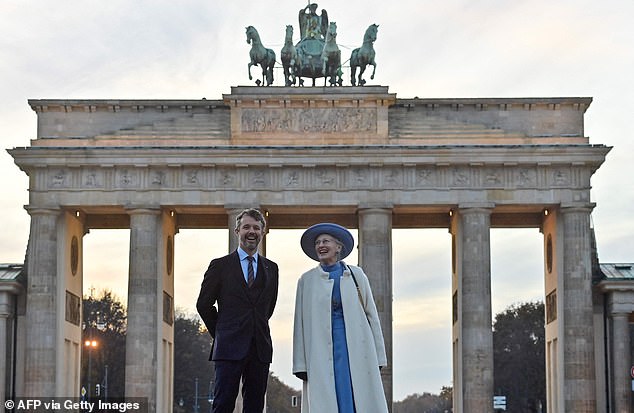 Pictured: Queen Margrethe II of Denmark and her son, Crown Prince Frederik of Denmark visit the Brandenburg Gate in Berlin on November 10, 2021

Despite her age, Queen Margrethe continues to make foreign visits, having made over 50 during her time as queen.

Meanwhile, Merkel is expected to be in her final months as Chancellor after 16 years having announced that she would not seek a fifth term in the position in the 2021 election, which saw her CDU party suffer an embarrassing defeat.

Speaking over the weekend, she said that she ‘will no longer be involved in politics’ after a new government is formed, expected to be in December.

‘I won’t be a troubleshooter for political conflicts,’ she said on Sunday. ‘I’ve done that for many years, 16 years as federal chancellor.’ Instead, she said, her immediate plan for when she leaves office was to sleep and read.