Primark is bouncing back sharply from the pandemic with plans to open a slew of new shops and pay a special dividend to investors.

Owner Associated British Foods (ABF) said the strong vaccine rollout in all its markets has prompted shoppers to flood back to stores.

As long as there is no return to lockdown, it said, sales will keep growing and it will claw back the £2billion it lost because of restrictions last year.

Back in fashion: Primark said the strong vaccine rollout in all its markets has prompted shoppers to flood back to stores

And in a boost for customers, it played down fears of supply shortages this Christmas, insisting it would not raise prices in the face of rising costs.

But he added: ‘We do not see any crisis developing as we look forward – it’s just more difficult.’

ABF declared a special dividend of 13.8p on top of its annual payout to investors, which brings the returns to shareholders in line with 2019 levels at 40.5p.

And it said it will open 132 Primark shops – 47 of which will be in the US where it has a ‘strong foundation’.

Weston said its performance for the year to September 18 showed the ‘resilience’ of the group.

Weston said: ‘Primark delivered a good performance in the face of continued disruption to trading caused by the pandemic.

‘We have the people and the cash resources to seize the opportunities ahead and we look to the future with confidence.’ 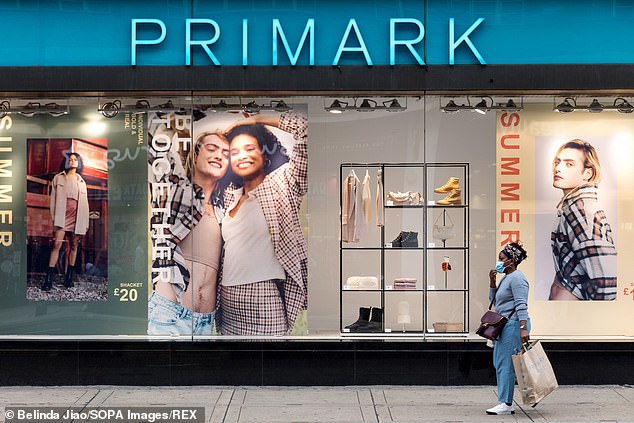 Recovery: Primark owner Associated British Foods said the strong vaccine rollout in all its markets has seen shoppers flood back to stores

The group warned it is ‘not immune’ to supply chain disruption, wage inflation and increasing material costs.

But it said disruption would be ‘broadly mitigated’ and there would be ‘limited availability’ of just a small number of lines.

He added: ‘We’re not putting Primark prices up.’

Sales at the fashion retailer were still 12 per cent down from pre-pandemic levels after a year of disruption from lockdowns and the ‘pingdemic’.

The low-cost brand, which does not sell clothes online, said that it will launch a new website next year where customers can browse deals before coming in to the shops to buy items.

As well as the new stores it will launch in the US it said that it will see strong growth in France, Italy, Spain and Portugal. AJ Bell investment director Russ Mould said there was ‘a lot to like’ about the announcement.

He said: ‘With lockdown and forced store closures now hopefully a thing of the past, Primark can concentrate once again on its expansion plans and the US is going to see a lot more stores in the years to come.

‘There doesn’t seem to be too much of a worry about supply chain problems as it says stock availability is generally good in the run-up to Christmas, which is something that will also help the brand stand out from the crowd at a time when so many other companies are struggling to keep shelves filled with items.

‘Primark is one of the few brands which still draws in the crowds on the High Street, which says something about how successful the business has been.’