The Met Police have increased the number of officers on duty at Wembley on Friday night after the crowd disturbances that marred England’s World Cup qualifying draw against Hungary last month.

More than 1,000 Hungary fans booed the England players who took the knee before kick-off and one was arrested for racially abusing a steward, which sparked fighting in the crowd between visiting fans and the police.

The FA have sold 4,400 tickets to Albanian fans for Friday’s game and have been working with the police to enhance security arrangements. 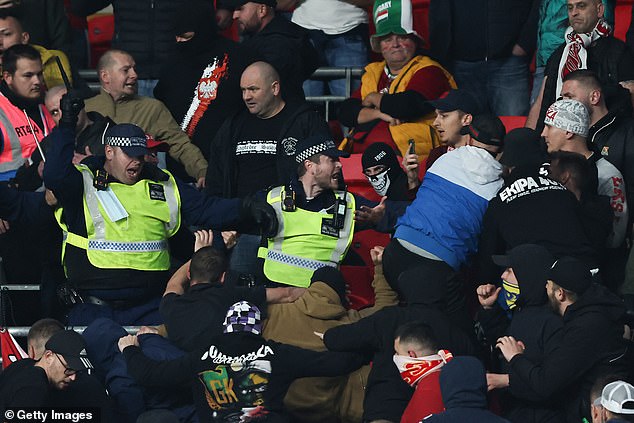 Police were forced to retreat in the face of a mob of Hungary fans during the clash at Wembley which finished as a 1-1 draw.

Officers were overwhelmed by black-clad ultras – some wearing skeleton balaclavas – following violent clashes in the away end of the stadium.

Shocking footage showed the Met fleeing as thug clambered over seats and each other to try to swing punches at policemen.

England were recently ordered to play one match behind closed doors as a punishment for the unrest at Wembley Stadium during the Euro 2020 final. 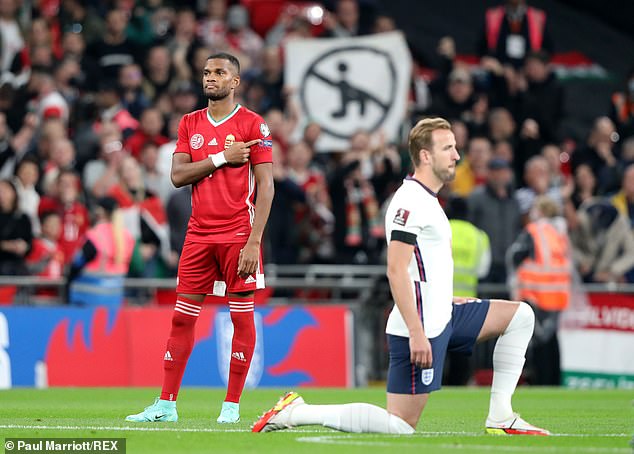 More than 1,000 fans booed England players for taking the knee before the Hungary game

The stadium ban will be for the next UEFA competition match. UEFA also imposed a ban for a second game, which is suspended for two years.

The Football Association was fined 100,000 euros (£84,560) for ‘the lack of order and discipline inside and around the stadium’ for the game.

Fans fought with stewards and police as they attempted to break into Wembley for the match on 11 July, which England lost to Italy on penalties.

Hundreds of fans got into Wembley for the showpiece without tickets after areas around the stadium became packed hours before the evening kick-off.