There is no debate around Kamaru Usman’s status as the UFC’s pound-for-pound No 1 and the ‘Nigerian Nightmare’ is well on his way to becoming one of the greatest of all time.

On Saturday night he put his closest rival to the sword for a second time in a decision win over Colby Covington and he is starting to ‘lap’ the welterweight division.

Usman has not tasted defeat for 11 years, developed fearsome striking to go with his dominant wrestling and it is hard to see where he might slip up.

Having shared the octagon with Covington for a combined 49 minutes over both fights, Usman is adamant that ‘Chaos’ is his closest competitior.

‘All these guys, you can be the great one but there’s always going to be that one guy that’s going to be able to push you and he is that guy.

‘That guy’s tough. He’ll tune up a lot of guys in the division. We’ll see. It’s up to him. If he’s willing to do the work and get back up here and if I’m still here, then we’ll make it happen.’

So if he’s just beaten his biggest threat yet again, who might be the man to dethrone Usman, and how long could he reign? 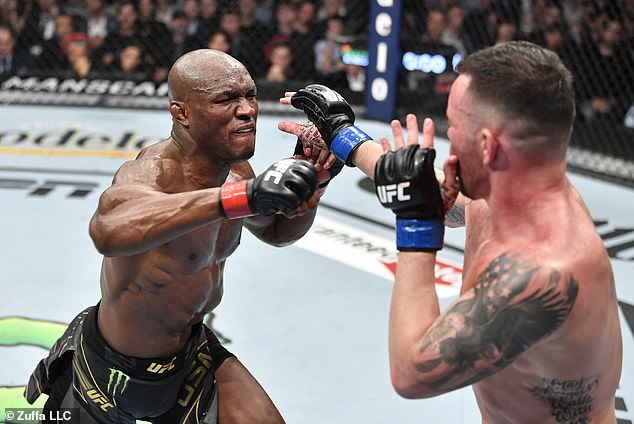 The ‘Nigerian Nightmare’ beat Colby Covington, his closest rival, for a second time

Make no mistake, the British welterweight would start the fight as a betting underdog against Usman, even if he beats Jorge Masvidal with flying colours.

‘Rocky’ faces Masvidal at UFC 269 next month and given that his opponent has already lost twice against the champion, it will be fascinating to see how the Birmingham fighter fares.

A late wobble against Nate Diaz completely took the gloss off what had been a brilliant technical display from Edwards earlier this year.

But the four preceding rounds should not be forgotten. He looked masterful and has not lost since Usman beat him six years ago. 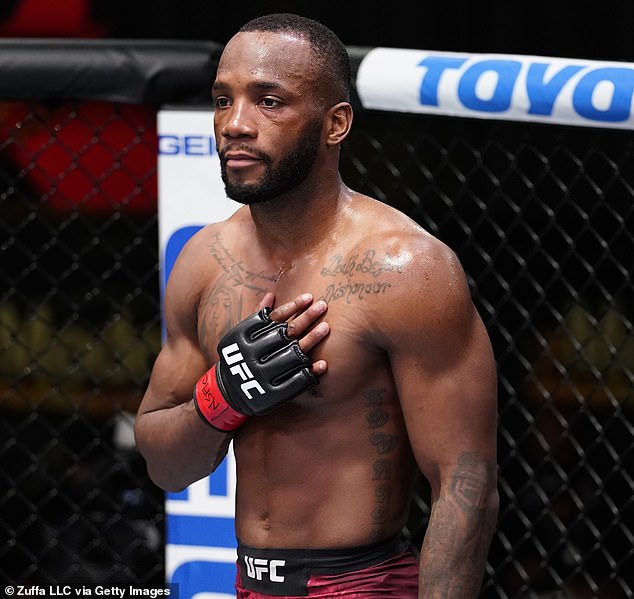 Edwards previously said: ‘I didn’t b*tch, I didn’t moan, I took my loss on the chin. I worked my back up to a nine-fight win streak. Who else f****ing deserves it?’

Frankly, nobody deserves it as much as Edwards. He is not the most outspoken fighter in the world but accepted a clash with Khamzat Chimaev when all others were diving for cover.

It took some persuading for him to accept the Masvidal match-up as he wanted to wait for Usman, but a win in December makes him impossible to ignore.

Stylistically, he does not have the wrestling pedigree of Usman and that could be the real difference maker in the fight.

Usman is sharp on the feet now but Edwards could be a match for him in that department. All things considered, it would be a huge but unexpected win that would send shockwaves through the sport.

Edwards holds a unanimous decision win over Luque but that was four years ago and the Brazilian has since emerged as a top contender.

It seems his game has moved to another level and he’s finished his last four fights, two by submission and two by knockout.

The most recent success came against deadly ground specialist Michael Chiesa, who he tapped with a D’Arce choke.

That victory really set tongues wagging and given the scarcity of other legitimate contenders, he could fight for the belt in the next six months. 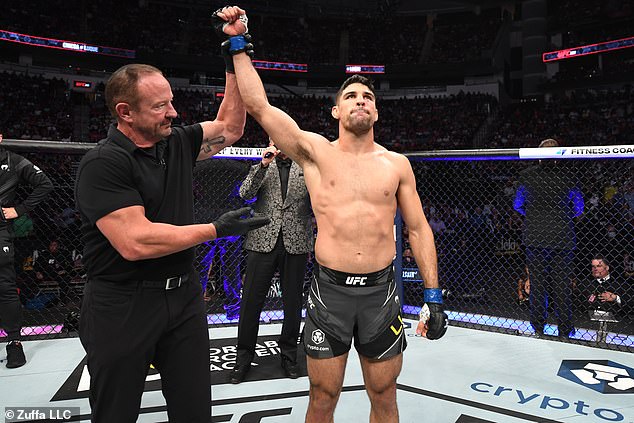 But could he beat Usman? The champion has no real weaknesses and although Luque would back his submission skills, taking the pound-for-pound No 1 down is almost impossible.

Scratch that. Taking Usman down has been completely impossible. Not one of his opponents has ever managed to put him on his back.

What a skill that it to have at your disposal. Effectively, Usman can dictate where a fight takes place and it is tough to see Luque getting the better of him.

So if Luque and Edwards would go in as significant underdogs, who else could break the champion?

There is empty hype and then there’s the hype surrounding this man.

Chimaev has made waves like few since Conor McGregor burst onto the scene and even his first four fights weren’t as emphatic.

After belting three opponents in 66 days last year, he was thrown the dangerous Li Jingliang after a potentially career-ending battle with Covid.

Chimaev threw him around like a rag-doll and his path seems destined to cross with Usman at some point. 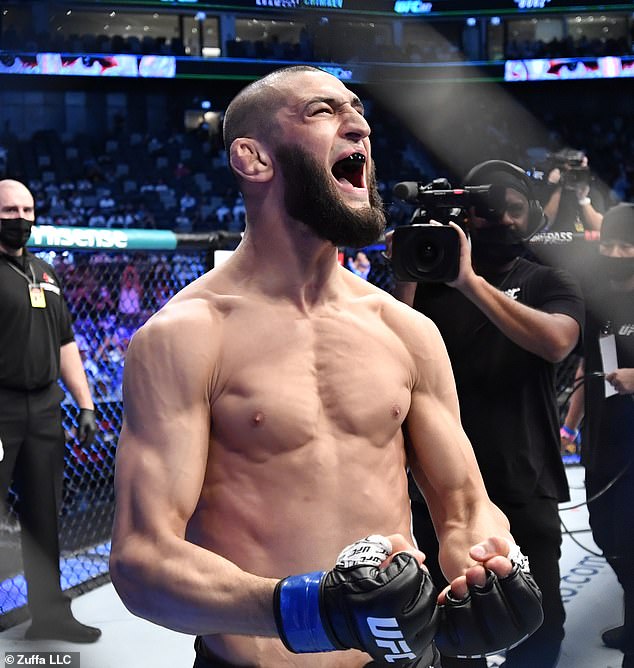 Dana White admitted he has never seen anyone like Chimaev, but still wants to see how he’ll fare against a top five opponent.

He said: ‘I get it: The dude is one of the coolest, baddest things we’ve ever seen and the way he rips through people. But once you break into the top 10, top five – not even talking about Usman – it’s a whole other game.

It would be no surprise at all if he wiped the floor with them. 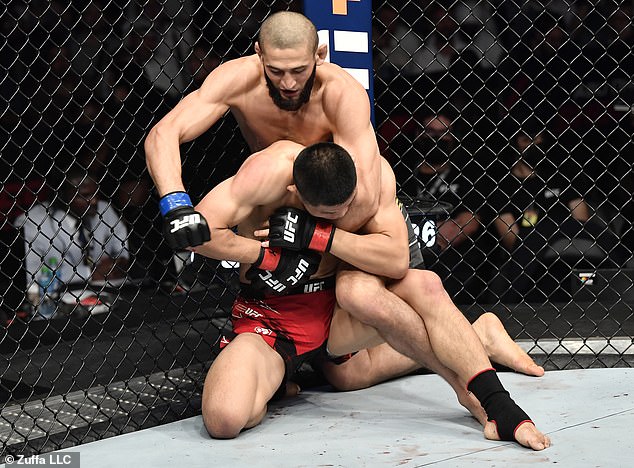 Even though we might be forced to wait – year from now might be a realistic time frame – Chimaev appears to have all the tools to beat Usman.

Their skillsets are very similar – powerful wrestlers with frightening power in the hands.

Chimaev has youth on his side too at 27, seven years Usman’s junior. When you cast your eyes across the 170-pound division, even at this early stage, he’s the man who might have the best chance.

If there was anyone else dominating the middleweight division, all the talk would be about Usman moving up.

He is well on his way to being discussed as the greatest welterweight in UFC history but still trails Georges St-Pierre in that regard.

GSP managed to add the middleweight belt to his collection and become a ‘double champ’ by beating Michael Bisping.

But Usman has previously insisted that there is almost no chance of him trying to fight his close friend and fellow Nigerian Adesanya.

He did recently add a caveat to that – saying: ‘Unless (UFC President) Dana White wants to give us $100 million, then me and Israel have to have a serious talk like, hey, do we want this 50 apiece or what?

‘But right now that doesn’t really interest me because I meant what I said that two Nigerians with belts is more important to me than one Nigerian with two belts.’

As long as Adesanya is in place at the top of the tree, which could yet be for a long time, Usman won’t face him and the UFC won’t cough up the kind of money he is discussing.

SO HOW LONG COULD HE REIGN?

Usman does not seem like the type of champion to lose motivation or become distracted by the trappings of his success.

Legacy is a key motivator for him but there must come a point where he needs a fresh challenge. If he can see off Edwards, Luque and the division’s fresh blood in Chimaev, it could be years before he loses.

But manager Ali Abdelaziz will no doubt be plotting big pay-days and for those, big challenges are needed. 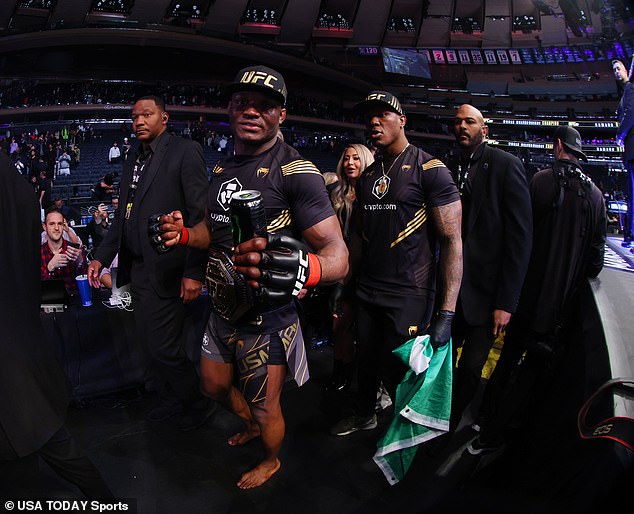 Usman has spoken about a cross-over bout against Canelo Alvarez in the past but it seems highly unlikely at this stage.

Perhaps the more time that passes, the higher the chances are of him going back on his promise not to fight Adesanya.

Usman has almost become too dominant for his own good. The pound-for-pound No 1 has his foot on the throat of the division and it does not seem to be budging anytime soon.