By Lawrence Booth for The Mail on Sunday

Australia meet New Zealand in the final of the T20 World Cup on Sunday, with all of cricket hoping the game is not decided before a ball is bowled.

So crucial has the toss been in this tournament that all nine of Dubai’s floodlit matches have been won by the side choosing to field – including Thursday’s semi-final, when Australian wicketkeeper Matthew Wade settled matters with a thrilling flurry of sixes off Pakistan fast bowler Shaheen Shah Afridi.

Wade’s captain, Aaron Finch, who finds himself on the brink of what would be a spectacular heist, claimed he ‘wouldn’t have minded’ batting first in that game. In which case his team-mates might like to have a word with him should New Zealand’s Kane Williamson call incorrectly this afternoon.

On Saturday, Finch added: ‘At some point in the tournament, you’re going to have to win a game batting first.’

But Australia have won five tosses out of six so far, and won each of those games with a convincing number of wickets in hand: five, seven, eight, eight and five. On the one occasion they lost the toss and were put in to bat, they were thrashed by England.

New Zealand, who – like their neighbours – are hoping to lift the T20 World Cup for the first time – have enjoyed less fortune, winning only two tosses. But those two came in their most important matches, in the Super 12s against India and the semi-final against England. Losing the toss against Scotland, Namibia and Afghanistan was never likely to inconvenience them.

Now, having got the monkey of the 2019 World Cup final off their back by beating Eoin Morgan’s side, they must rid themselves of another. Taking into account crunch white-ball matches at multi-team tournaments, the New Zealanders have not beaten Australia in 16 games dating back to 1981 – the year of Trevor Chappell’s infamous underarm delivery at Melbourne to prevent Brian McKechnie from hitting a last-ball six.

The phlegmatic Williamson was too canny to get sucked into the question of which side are underdogs. Meanwhile, the closest he came to revealing a gameplan was a quiet advocation of ‘smart cricket’. 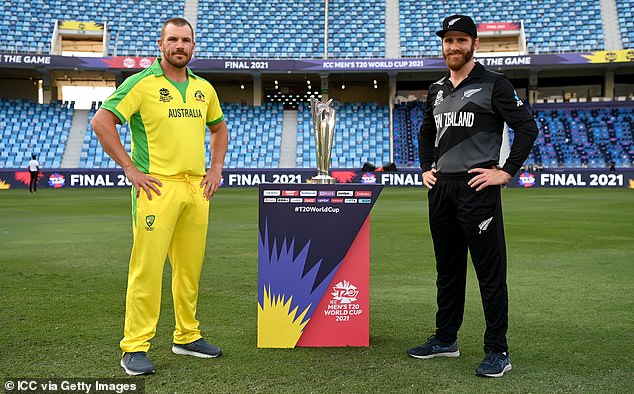 Tim Seifert will come in for his first game of the World Cup after wicketkeeper Devon Conway broke his hand punching his bat following his semi-final dismissal, and offers power. Against England at Auckland in November 2019, he smashed five sixes in a 16-ball 39.

As for Australia, victory would make a mockery of their form this year. Going into the World Cup, they had won four T20s and lost 11 in 2021, including 4-1 defeats in the West Indies and Bangladesh. And while they lacked first-choice players in both series, Finch’s assertion that his team’s presence in the final is ‘not unexpected’ may not be a view widely shared.

‘We came here with a clear plan to try to win this tournament,’ he said. ‘We always felt as though we’ve got the depth and quality in the squad to put ourselves in a position to do that.’

An incorrect call from Williamson may help, too.