Formula One fans hit out at Red Bull’s Max Verstappen on social media for nearly causing yet another crash between him and Lewis Hamilton by forcing him out wide at the Brazilian Grand Prix.

Reigning F1 champion Hamilton sealed a stunning comeback victory in Sao Paulo on Sunday, fighting back from tenth in the grid at the start of the race to finish at the head of the podium and keep his title chances alive.

The Mercedes driver finally overtook Verstappen on lap 59 but the drama came 11 laps earlier when the Red Bull racer forced Hamilton off the track when the latter threatened to get around him. 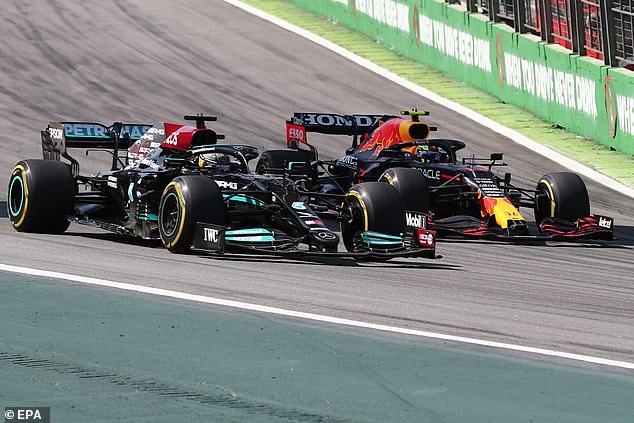 Both drivers left the track before speeding back on course, but Formula One fans blamed Verstappen for more dangerous driving that led to another crash between the title rivals.

One fan reacted by saying: ‘Idiots will actually say verstappen is a good racer… he can’t hack being wheel to wheel so forces cars off track…’

Another tweeted: ‘Verstappen is the biggest unsportsman like driver in F1. Clearly beaten and to save position forces Lewis off wide. Show replay of cockpit.’

Meanwhile, one fan said: ‘Verstappen YET again forces Hamilton of the track last he crashes into him how many times is this driver gonna get away with this? didn’t look like he made an attempt make the corner. losing a lot of respect with Horner’

Another tweeted: ‘Verstappen’s onboard. Clearly went unnecessarily wide and was somehow not penalized. Lewis did an amazing job not making contact with this crazed dumbass.’

The lap 48 incident was investigated and no sanctions were handed out to the drivers, with a decision made around five laps later.

When Hamilton was informed by his team that no action would be taken, the Mercedes driver was heard saying: ‘Of course, of course.’

Other fans were stunned by the lack of punishment handed out to Verstappen for dangerous driving in Sao Paulo. 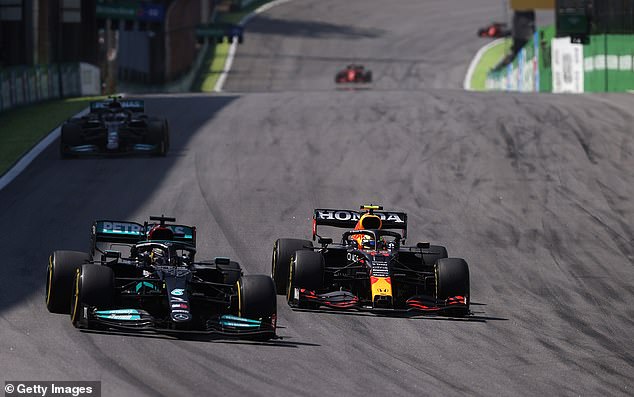 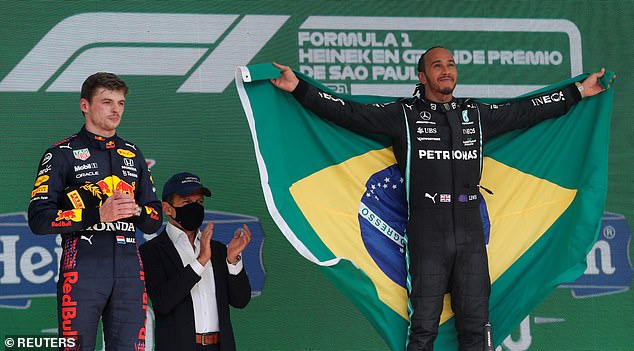 One fan tweeted: ‘@fia Shocked at the stewards ruling on Verstappen running wide on Hamilton overtake. Max clearly drove Lewis off the track.’

Another posted: ‘Back in Silverstone Hamilton drifted out wide, ended up taking out verstappen and gets a penalty. Verstappen drifts out wide, Hamilton avoids and gets no penalty. I’m all for “Letting them race”, but consistency is required by the FIA.’

One fan claimed: ‘I’d love to see Max win his first title, but that was a clear-cut 5 second penalty. Unless they can show us an angle from the cockpit that shows Max fighting with severe understeer – which the coverage hasn’t – it was an unfair move.’

Another said: ‘I hope you guys know that this is much more than a Max vs Lewis thing. Those decisions the FIA make set a precedent for what is and what isn’t allowed in racing. If you allow mad stuff like that, then that’s what racing will become.’ 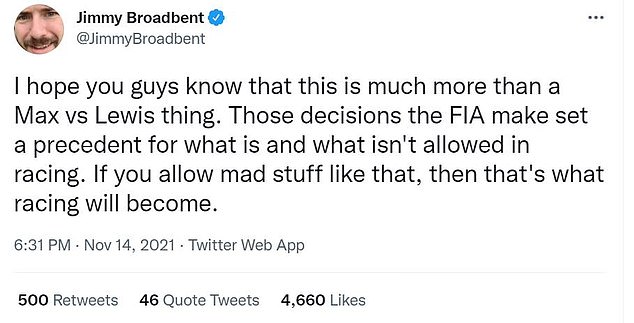 Hamilton and Verstappen have history this season of colliding, with the margin for error razor-thin as the pair battle it out for the world championship.

Back at the British Grand Prix at Silverstone in July, Hamilton clipped the Dutchman at Copse corner which ruled the Red Bull driver out of the race. The Briton went on to win even though he was given a 10-second penalty over the incident.

Then in Monza, it was Verstappen who was penalised for a collision with Hamilton which took both drivers out of the race, with the Dutchman’s wheel going over the Mercedes driver’s head in a near-fatal incident.

Hamilton’s injuries were limited to neck pains and headaches while Verstappen was giving a three-grid penalty for the Russian Grand Prix, which the Mercedes driver won by 53 seconds.