By Ray Massey for the Daily Mail

One of the last jewels in Britain’s automotive crown is at the centre of takeover speculation as it seeks to embark on an electric future.

McLaren Group, which includes a supercar automotive arm and an F1 racing division, denied reports emanating from Germany that it had been sold to German car maker Audi.

But significantly, the supercar firm – based in Woking, Surrey – did not rule out partnership or co-operation deals, highlighting ‘ongoing discussions and collaboration with relevant partners and suppliers, including other car makers’.

In the crosshairs: McLaren Group – based in Woking, Surrey (pictured) -denied reports emanating from Germany that it had been sold to German car maker Audi

Similarly, Audi, part of the Volkswagen Group, did not deny taking a close interest in McLaren, stating somewhat teasingly: ‘As part of our strategic considerations, we are constantly looking at various co-operation ideas.’

BMW is already a supplier to McLaren of electrification and battery technology for its two-seater 205mph Artura petrol-electric hybrid hypercar – costing from £185,500 – which will sprint from zero to 60mph in three seconds.

But the rush to pure electric means McLaren needs, at the very least, to forge alliances with partners who specialise in this area, such as Audi.

McLaren Automotive – founded in 1963 by racer, engineer and entrepreneur Bruce McLaren – employs 3,000 and pre-pandemic it sold around 4,500 cars a year. 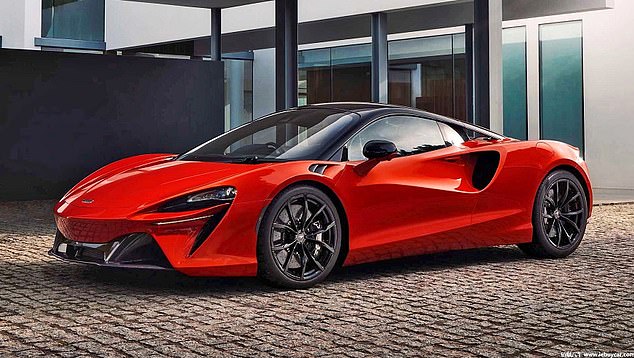 Takeover and partnership speculation was sparked by a report in the German automotive magazine Automobilwoche and picked up and expanded upon by the UK magazine Autocar.

News agency Reuters had also reported that Audi was ‘open to cooperation opportunities’.

A spokesman for the British car maker said: ‘McLaren Group is aware of a news media report stating it has been sold to Audi. This is wholly inaccurate and McLaren is seeking to have the story removed.’

However, the spokesman added: ‘McLaren’s technology strategy has always involved ongoing discussions and collaboration with relevant partners and suppliers, including other car makers.

However, there has been no change in the ownership structure of the McLaren Group.’

The flurry of speculation about a takeover – or at the very least a ‘partnership’ link up with a foreign car giant – comes after chief executive Mike Flewitt stepped down last month after eight years in the job.