Not long ago, it looked like Aleksandar Mitrovic could do nothing right. Struggling to make the Fulham first team, failing to fire in the Premier League and topping it off by missing the decisive penalty against Scotland to ensure his Serbia side missed out on Euro 2020.

Just over 12 months later, it seems everything the towering striker touches turns to gold. He is already on course to smash the all-time scoring record in the Championship and Fulham are destined for an instant return to the top flight, while he has more than redeemed himself on the international stage.

Serbia went from spectators at Euro 2020 this summer to contenders at the World Cup next year thanks to their star striker as he powered home a header in the dying minutes against Portugal to seal a 2-1 win and their guaranteed place in Qatar. 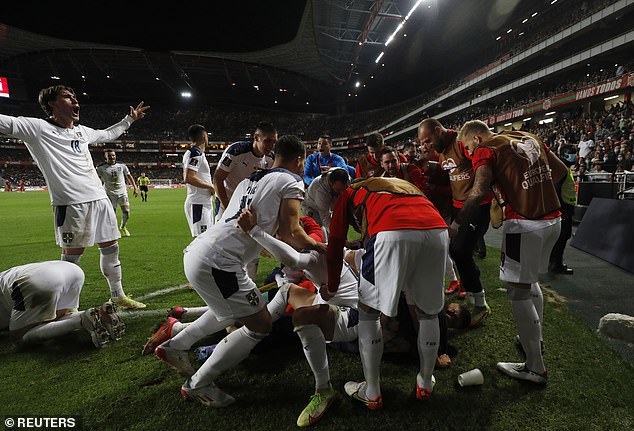 As Portugal’s big name stars stood motionless in dejection, Mitrovic wheeled away – with the entire Serbia squad and substitute bench in pursuit, and the 27-year-old ended up at the bottom of a 23-man bundle by the corner flag.

An image can speak a thousand words, but that footage of pure ecstasy summed up how highly he is regarded in his country and by his team-mates, despite enduring a tough year.

Worshipped on the pitch and in the stands – as a clip after the game showed an over-the-moon Mitrovic making his way back onto the turf in his underwear, draped in the Serbian flag before running over to the supporters who stayed behind in a tiny corner of the Estadio da Luz to praise their hero.

Mitrovic pumped his fists in the air, danced wildly before bowing down to the fans. That respect is more than mutual. He has eight goals in eight World Cup qualifying games and has been integral in helping them reaching their second major tournament since 2010. 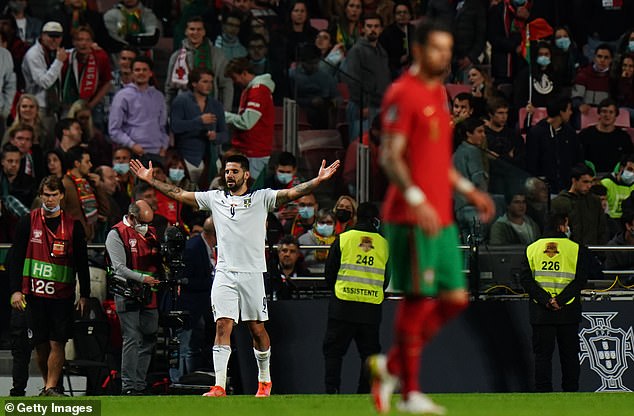 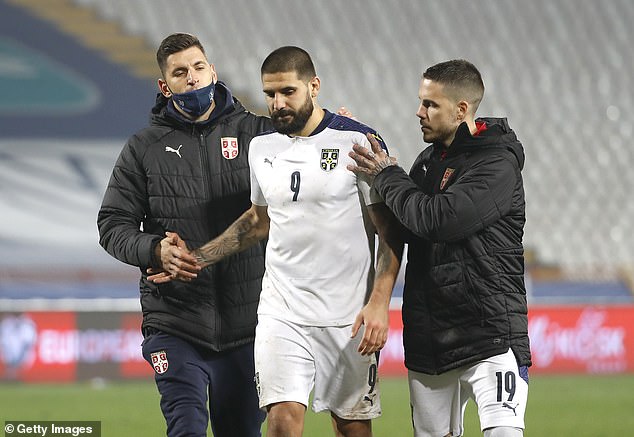 The incredible thing was that he didn’t even start the game – with the in-demand Dusan Vlahovic leading the line instead.

Mitrovic was thrown into the action by coach Dragan Stojkovic at half time with the score level at 1-1, coming on for defensive midfielder Nemanja Gudelj, and he ensured the boss did not regret his tactical gamble.

His jubilant scenes in Portugal make quite the contrast from the inconsolable figure that had to be helped off the pitch following his miss in the shootout loss to Scotland that sent Steve Clarke’s men through and dashed their hopes on home soil. There might have been some resentment towards him on that night, but not anymore.

In Serbia, Mitrovic is practically a religion, and that’s proving to be the case in west London too off the back of his sensational goalscoring form for Fulham.

With an incredible haul of 20 goals in just 17 games for Marco Silva’s men this season, Fulham are in good hands as far as promotion is concerned with the striker in their ranks. 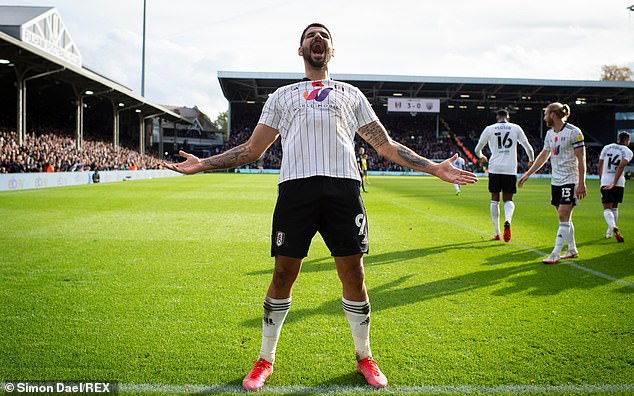 While he was in and out of the line-up under Scott Parker last season, he’s now the go-to man – starting all 17 games in the Championship this season, with 1,471 minutes under his belt compared to just 987 at the same stage in the 2020-21 campaign.

At that point he had netted just twice in the Premier League – with 494 minutes per goal – as Fulham endured a rocky start. Now he averages a goal every 74 minutes, with a big chance conversion of 60 per cent – up from 33.3 per cent last year.

He is producing more shots shots too – 74 in total, with a 27 conversion rate, up on 40 shots and a 5 per cent conversion rate from his first 17 Premier League games.

He’s even thrown in five assists to make him the complete forward. Incredibly, his manager Silva still thinks he can get better despite watching him smash a hat-trick past West Brom last month. 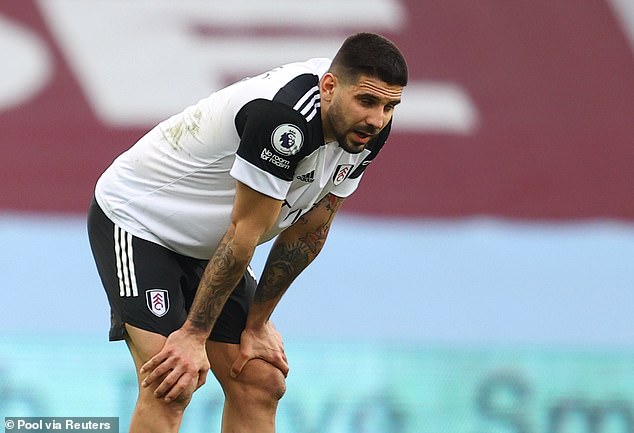 The former Everton boss knows Fulham are lucky to have the big striker but doesn’t think he is the finished article yet and wants to keep working on his tactical awareness.

‘All the best players have something to improve. Mitro has to be there to finalise – he has the same (favourite) spot in the box where he is strong, (but) we are working with him on his position in the box.

‘We are working with him to attack more at not just the far post but other areas as well. It’s up to us to get the best for him and keep him improving.’

Silva stressed that Mitrovic’s unbelievable numbers this season were special and that he ‘doesn’t need to speak to him’ when he’s in this rich vein of form, and also hailed him for making an impact defensively with his height to help them keep clean sheets this season. 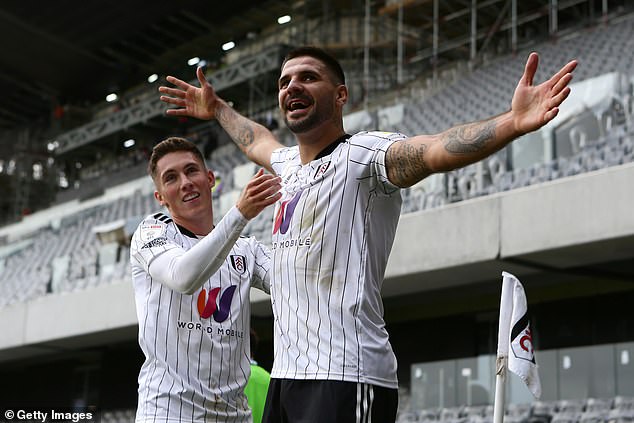 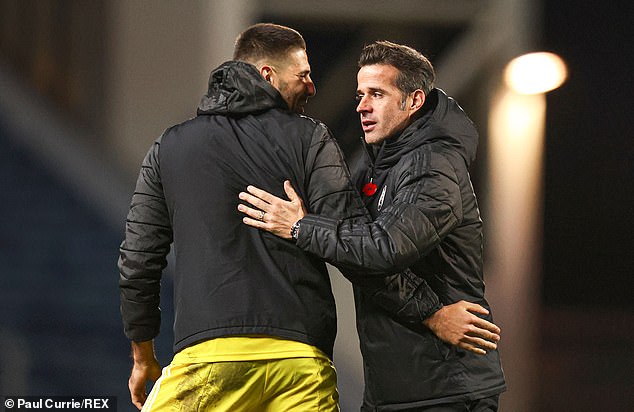 ‘Strikers that score 18 goals in 15 games, I think the numbers are there. They speak for themselves,’ he added after the victory over West Brom.

‘When a striker is scoring and scoring, I don’t need to speak to him. His job is done, I have to work on other things with him because his confidence is high.

‘When you have a player like him that creates so many chances and we have a player with his capacity and his ability to score goals of course he’s important and he’ll keep being really important for this football club.

Everyone loves a fairytale turnaround in football and Mitrovic is riding a wave. His goal now will be to overtake Ivan Toney’s record of 30 Championship strikes, take Fulham up and then take the top flight by storm before dazzling in Qatar.