Trainer Nigel Twiston-Davies says Bristol De Mai will deserve to have a race named after him if he can emulate the great Kauto Star and win Saturday’s Betfair Chase at Haydock for a fourth time.

But Bristol De Mai, who is owned by Simon Munir and Isaac Souede, takes an outstanding race and track record into the £200,000 steeplechase. The only time he has not won the race was when he was second to Lostintranslation in 2019. 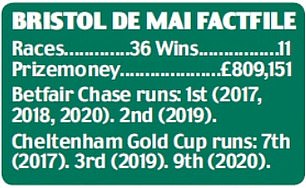 That is the only time the mount of Daryl Jacob has been beaten in six runs at the Merseyside racecourse.

Twiston-Davies said: ‘It would be just great to equal Kauto Star. He would be remembered for ever and they may even name a race after him. We are primed and ready to go. The one year where he was second we really struggled with lameness problems and didn’t quite get him there 100 per cent.

‘There are two long straights and easy bends at Haydock, so he can just get out there and do his stuff. A flat track where he can really boss things tends to suit him.’

Twiston-Davies can head into the race confident his stable is in top form. His five winners over the weekend included the victory of promising novice hurdler I Like To Move It at Cheltenham.

The momentum was maintained at Leicester yesterday where Twiston-Davies and his jockey son Sam were successful with Robinshill and Monarchofthegrange.

A Plus Tard, who will be attempting to become the first Irish-trained winner of the Betfair Chase, is the 13-8 favourite with Bristol de Mai 3-1.