Cristiano Ronaldo has always been a player who wears his heart on his sleeve and is passionate beyond measures whether representing club or country.

It is what makes him a living great of the game and has helped him to deliver a relentless winning mentality over the years. However that passion has often ventured into the realms of a meltdown on numerous occasions throughout his career.

The latest episode of Ronaldo’s football fury saw him fume at Portugal boss Fernando Santos just seconds after their 2022 World Cup qualifying campaign had ended with a last-gasp defeat against Serbia in Lisbon.

Ronaldo and Co will now have to battle their way through the play-offs in March next year if they are to reach the winter World Cup in Qatar.

Ronaldo was seen breaking down in tears after the final whistle, and went on to make his frustration at their failure to secure automatic qualification abundantly clear to his boss.

In a clip shared online, Ronaldo spotted Santos, 67, approaching and began shouting and gesticulating furiously with his arms towards him. The Portugal boss quickly walked off after a brief handshake with the 36-year-old. 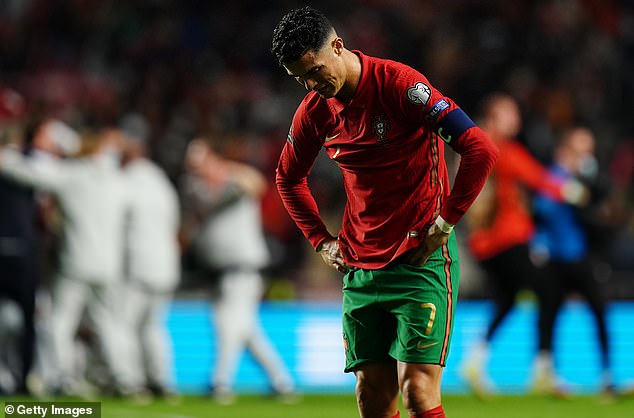 The former Real Madrid and Juventus star then puts his hands on his hips before making his way towards the other players and the tunnel with his dejection still clear for all to see.

On Instagram the following day, Ronaldo insisted Portugal’s hopes were still ‘very much alive’, while Santos played down the significance of the incident. But inside, the Portuguese star may still be seething.

The incident however demonstrated the passion still burns and boiled over as has happened before. Sportsmail takes a look back at the most high-profile cases… 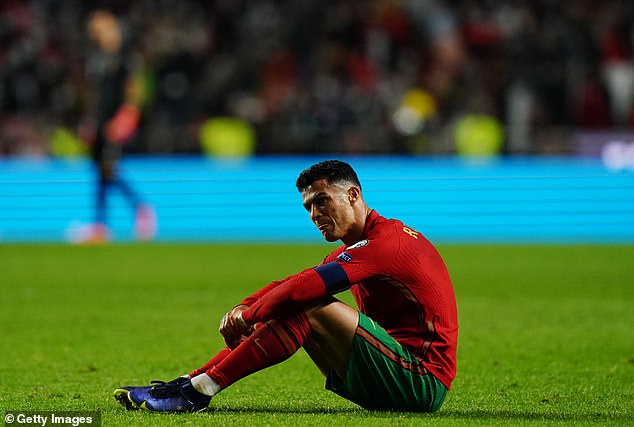 Ronaldo’s most recent tantrum while donning his country’s colours before his antics in Lisbon came in the reverse fixture against Serbia in March this year.

Ronaldo, as he has done so many times before, was poised to win the game in the dying moments for his nation after rounding the goalkeeper and slotting the ball into an open goal to seemingly hand his side a 3-2 victory in Belgrade.

Cameras around the stadium picked up the ball going over the line before his angled shot was cleared by defender Stefan Mitrovic, yet the referee – without the assistance of technology – thought otherwise. 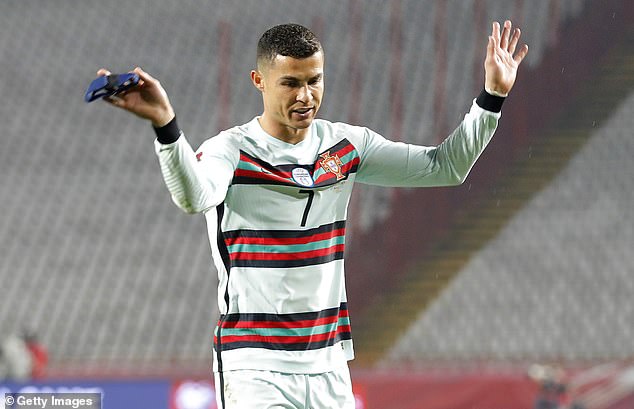 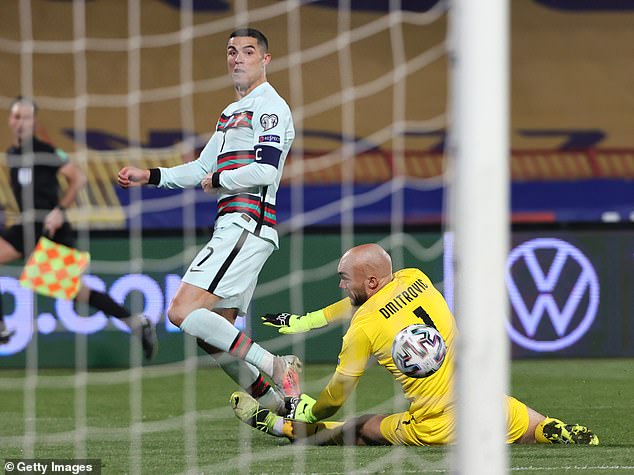 The goal was chalked off and Ronaldo almost burst blood vessels in his fury. The veteran star tore off his captain’s armband, threw it to the turf and stormed off the pitch.

The referee later apologised for his error of judgement, though Ronaldo remained rightly seething.

Looking back at how the rest of Group A panned out for Santos and his men, few would blame Ronaldo for looking back at this moment with anger.

Ronaldo hit an effort towards goal and it looked in, but the officials said it had not gone over

In Ronaldo’s final season in his first spell at Manchester United he played and scored against Man City in the local derby before being removed just before the hour-mark.

It’s safe to say he absolutely despised it.

Ronaldo is a player who wants to be involved in every match, and be the star attraction.

Having already scored, everything was going to plan for the forward.

It was derby day, the sun was high in the sky and United were on course to win courtesy of his exploits yet again. So, to see his number seven held up on the fourth official’s board was a bitter shock to the system. 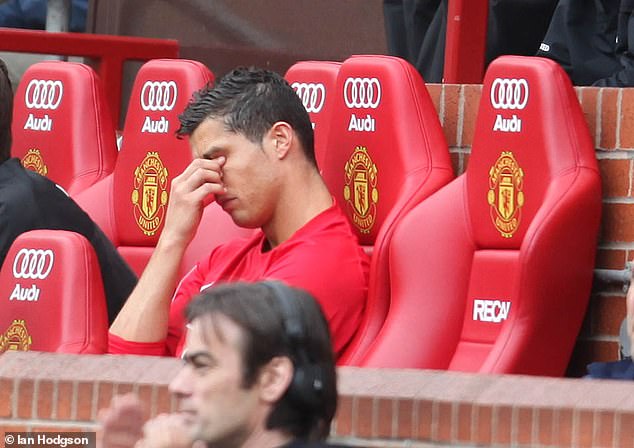 After being subbed in a Manchester derby in which he had already scored, Ronaldo imploded

It was a tactical decision, of course. United remained in contention for the Champions League and manager Sir Alex Ferguson clearly felt Ronaldo could do with a rest.

That sort of thing isn’t in Ronaldo’s rulebook though. He was at the time chasing the golden boot and wanted to continue his dominance in English football and see as many records as possible fall before moving on.

After crossing the touchline Ronaldo snatched a jacket before hurling it down on the United bench.

He then looked somewhat teary, before shaking his head and furiously rubbing his eyes and forehead.

Ronaldo takes great pride in strutting his stuff for Portugal, so when a bonafide wondergoal was taken away from him he was incensed.

The incident came during Portugal’s 4-0 mauling of then world champions Spain, in 2010, and would lead to a very awkward exchange with his former Manchester United team-mate Nani.

The winger even went as a far as offering a public apology to Ronaldo in the aftermath for stealing his glory. 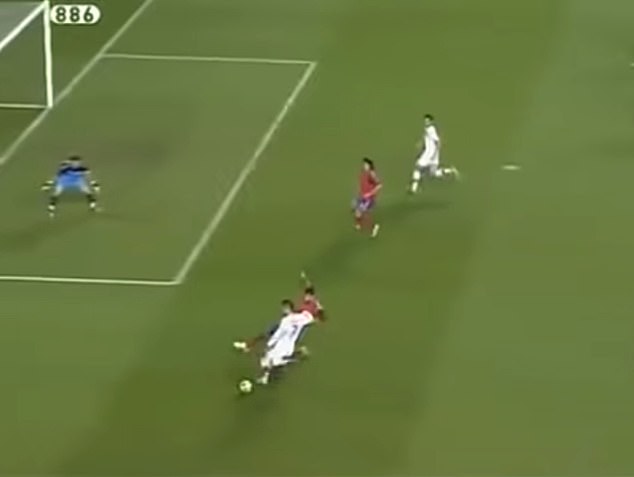 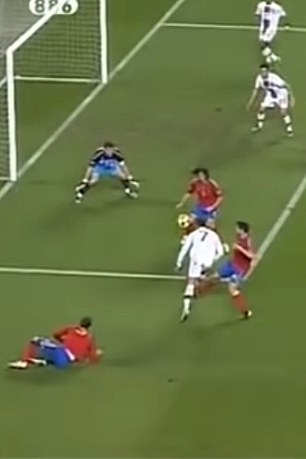 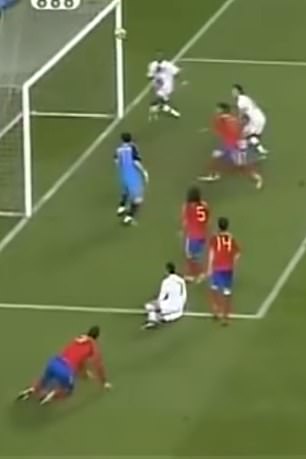 A delicate lob set up what was destined to be a goal for the ages, but then in came Nani 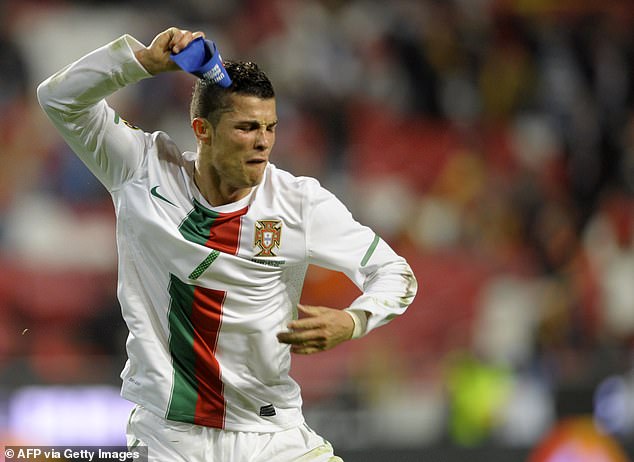 Ronaldo had danced through the Spain defence with magic feet. The spellbinding move left the world in awe and a stadium full of spectators with mouths agape.

It was effortless, and Ronaldo finished the move with an audacious scoop over the goalkeeper Iker Casillas’ head.

Yet, as it dropped and was about to cross the line, in came Nani with a needless header to void the entire move due to being in an offside position.

Ronaldo initially celebrated… but he knew.

As soon as the linesman raised his flag the Portuguese talisman span on the spot while viciously punching the air, before turning around and addressing Nani directly.

The fury in his eyes was more than apparent, despite the match being well in Portugal’s favour and only being a supposed friendly.

Conceding to Hungary at Euro 2016 simply tipped Ronaldo over the edge.

The match was poised at 2-2 on the 55-minute mark as a long range effort plunged into the back of the Portugal net.

Ronaldo was clearly furious that his side had emerged from the half-time interval and conceded so quickly in such a needless manner. 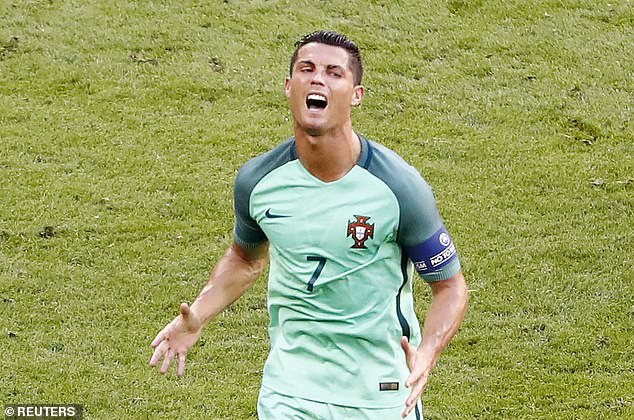 Just five minutes earlier Ronaldo himself had scored to put Portugal level, after Zoltan Gera had opened the scoring on 16 minutes and Balazs Dzsudzsak had also found the back of the net.

The meltdown he endured on the pitch was beamed worldwide. A red mist descended and Ronaldo again began to punch the air furiously while screaming into the abyss.

He would go on to score again in the match, though Portugal would ultimately draw the group stage tie, which everyone expected them to win, 3-3.

A incident in Madrid lives long in the memory, when Ronaldo’s fury peaked through on the field… despite his team having just scored.

In extraordinary scenes, Ronaldo was clearly livid that defender Alvaro Arbeloa had scored instead of him from close range.

It was Arbeloa’s first goal of the season for Real Madrid, but Ronaldo quickly took the shine off it with his petulance.

The Spanish league match, played against Almeria in 2015, was won comfortably 3-0 by Madrid but Ronaldo felt short-changed after waiting to tap the ball into an open goal.

Furious because he was chasing the golden boot, Ronaldo lashed the ball into the netting

The fact that Arbeloa got there before him angered the star forward, and his fury could be seen during the celebrations that followed.

Ronaldo hammered the ball into the netting after the goal had gone in, before walking away from the rest of his team-mates, who quickly mobbed former Liverpool man Arbeloa.

With his face scrunched up, Ronaldo returned to the halfway line. As was the norm, Ronaldo was chasing his rival Lionel Messi for the golden boot as the season reached its final weeks, hence it meaning so much to him.

After the match Arbeloa said: ‘I’m not upset about Cristiano’s gesture.

‘It’s normal that he should be angry, he didn’t score and his ambition is always to score.’

After being kicked up and down the pitch all game, Ronaldo snapped.

He knew he was the best player in the stadium and the treatment he was receiving was – in his mind – quite ridiculous.

Bilbao had just equalised minutes before Ronaldo took issue with a foul and then raised his hands when confronted by Ander Iturraspe, who quickly got up in his face to antagonise him.

It was exactly the reaction the Bilbao man had been hoping for. 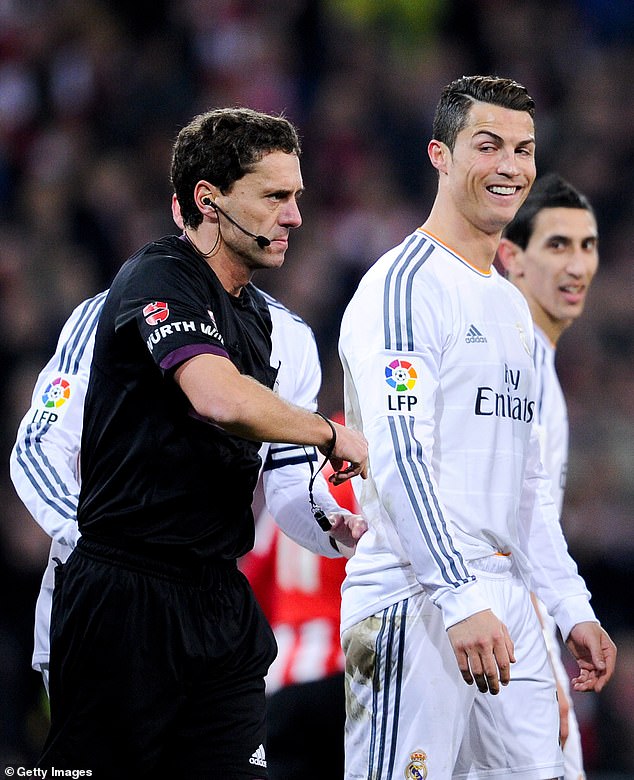 After being sent off against Bilbao Ronaldo could only laugh, which quickly turned to rage

Ronaldo was sent-off for the incident while the Bilbao star escaped with a yellow card, with tempers boiling over on the pitch as a result.

Such was his anger and disbelief at what was happening, Ronaldo could only smile. Later, down the tunnel, he would hurl his boots into a wall.

Madrid would go on to drop points in a year that Atletico Madrid claimed the title on the final day of the season.

Ronaldo may have his faults and let his temper get the better of him, but he always – always – brings his A-game to the Champions League, as United fans have found out this season following his return.

That is why this incident was so shocking.

Ronaldo allowed indiscipline to get the better of him and was flashed the red card for Juventus against Valenica.

It was absolutely not how the script was supposed to go.

Juventus broke the bank to bring Ronaldo to Turin, despite his ageing years, simply because he was Mr European Football. 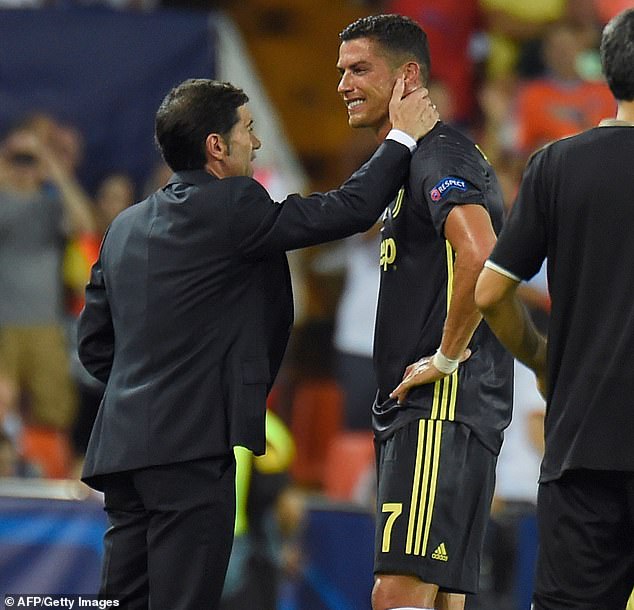 Ronaldo adores the Champions League and is the competition’s all-time top goalscorer.

So, when he was carelessly dismissed against the Spanish side for pulling Jeison Murillo’s hair, he was livid.

At first he couldn’t quite believe it, and then had to be restrained by team-mates once the realisation set in.

After leaving the field Ronaldo stopped on the touchline appearing to be in tears, and was even comforted by Valencia’s Spanish coach Marcelino Garcia Toral.

Ronaldo had scored in the game, from the penalty spot, and Juve saw out the match 2-0 after Miralem Pjanic also slotted home from 12-yards. Ronaldo even ended up having the card rescinded.

Still, the fact it almost cost his side progression in his beloved Champions League very nearly pushed Ronaldo right over the edge.