Captain Kane scored four against the worst ranked team in world football as England smashed 10 past San Marino to guarantee their place at Qatar 2022 and end 2021 in unforgiving fashion.

It now appears only a matter of time before Kane breaks Wayne Rooney’s all-time record of 53 goals, and Southgate joked: ‘If we left him another half-an-hour, we would have had Wayne Rooney’s family on the phone telling us to get him off.

‘But he is a phenomenal goalscorer, he’s obviously not had the opportunity in some of those games where they would have been more goals available. We wanted to give him that chance tonight and he took it really well.’

Kane himself added: ‘It is fantastic. 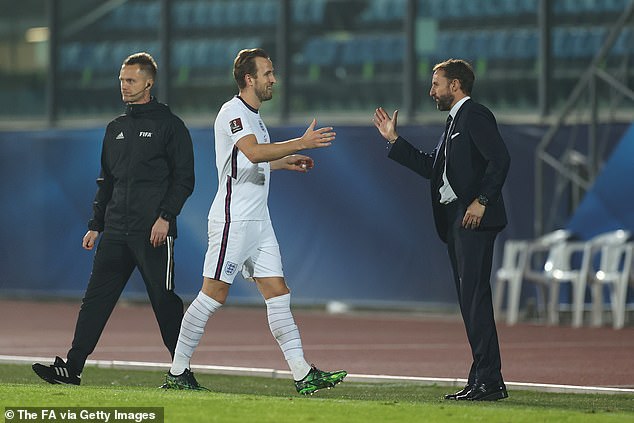 ‘Every time I wear an England shirt I am proud and whenever I can score goals it is one of the greatest feelings I have can have in my career.

‘It’s nice to be amongst those goalscorers and hopefully we can keep them coming.’ 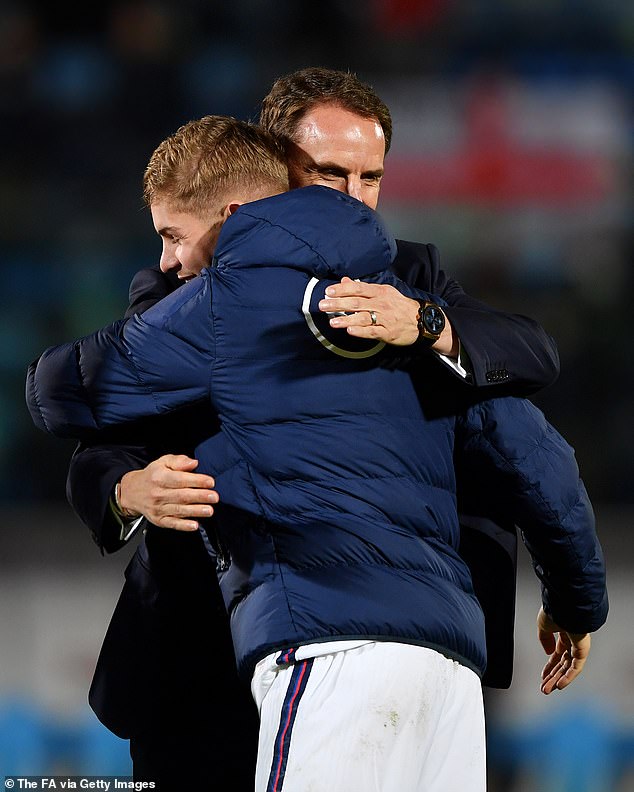 ‘I’ve got to credit all our players and staff on a really good year. Their mentality tonight, because we can’t do anything about the level of opposition, the way they applied themselves was terrific.’

Emile Smith Rowe scored and assisted on his first England start and Southgate has indicated that the Arsenal forward is now a genuine contender for his World Cup squad.

‘I thought Emile, all week with us, has given a really good account of himself, his quality and tight control is excellent and he is inventive in his play.

‘So he has got to keep doing what he is doing, we finished with a very young side with a lot of promise for the future as you can see.’

When asked how many places in his final World Cup party might be up for grabs, Southgate added: ‘I’ve not really thought that far ahead, now is a good period to reflect on that. We’ve had 19 matches this year which is a lot in international terms and there’s a lot to take in. But this is a good opportunity to take in what has happened over the last few months.’