By Camilla Canocchi for Thisismoney.co.uk

Online instrument retailer Gear4Music has spooked investors with a profit warning after sales were hit by post-Brexit supply chain issues.

The York-based company said its new European hubs in Ireland and Spain, which it had to set up due to Brexit, were taking a bit longer than expected to scale up, hitting sales in the current quarter and thus set to dent full-year profits.

While the company tried to reassure investors that these were ‘short-term’ supply challenges that would be solved in the next quarter, shares still tumbled almost 13 per cent to £6.97 in morning trading.

However, they are still more than three times the £2 they were worth in November two years ago.

Wrong chords: Gear4music said profit will come in lower than expected this year

Gear4music, which sells own-brand musical instruments as well as from famous brands like Fender and Yamaha, has seen guitars, digital keyboards and pianos flying off the virtual shelves during the past couple of years as people took up learning instruments during lockdowns.

In June, the company upgraded its profit guidance after continued strong sales, but today it had to rein in those expectations. It is now predicting full-year profit before all nasties of ‘not less than’ £12million.

That would be less than the £18.9million it made in the last financial year, and below analysts’ expectations of £14million, but still well above the £7.8million it made two years ago.

‘As planned, our new European hubs in Ireland and Spain became operational in September, but due to some short-term supply chain challenges, these new hubs are taking longer to scale-up than we originally anticipated,’ the company said.

‘As a result, ongoing Brexit related challenges are impacting for longer than we had hoped, and our European Q3 sales to date have been lower than previously expected .

‘As such the Board believes that results for the financial year will be lower than recently upgraded consensus market expectations.’

Sales of music instruments have slowed down a bit from the heights of the pandemic, but revenues and profits for the six months to the end of September were in line with expectations, the company said.

Revenues for the half year fell 8 per cent compared to its ‘exceptional’ performance last year, when they rose 42 per cent, but are still more than 30 per cent ahead of pre-Covid levels at £64.7million.

The company increased its market share in the UK to almost 9 per cent, with stable sales of £36.7million.

But its international sales suffered due to Brexit-related red tape, falling by 16 per cent on 2019 figures to £28million and now making up a smaller 43 per cent of all group revenues.

Gear4Music has showrooms in York, Sweden, Germany, Barcelona and Dublin.

In September, it bought HiFi retailer AV Online for £9.2million, which is set to complete next month. This will be followed by the launch of AV.com in January next year, which the company said will ‘significantly increase our addressable market size’. 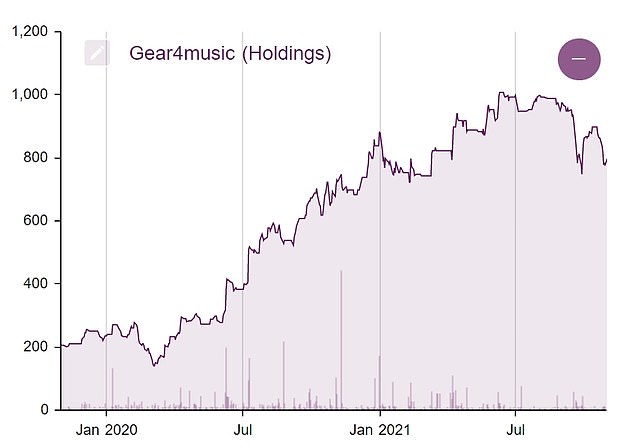