Polish border guards thwarted two ‘mass attempts’ to cross the border overnight by rock-throwing migrants who tried to storm across a railway track from Belarus.

Video showed guards having laser pointed shone in their eyes and being pelted with stones by a group of around 50 migrants who tried to cross the border at Czeremcha overnight, 70 miles south of where the main camp is located.

Dozens of smaller attempts were also made, with the Polish border service saying a total of 161 crossings were stopped with 34 migrants forcibly deported.

The situation remained tense early Wednesday with thousands of migrants still camped close to the border at Kuznica – where violent clashes erupted Tuesday – even as others were march off to an unknown location.

It is thought they are being taken to temporary accommodation in warehouses nearby. Thousands more migrants were taken to similar shelters overnight.

Meanwhile Mariusz Blaszczak, the country’s defence minister, warned the crisis is likely to continue for months and that Poland must remain vigilant. ‘I hope it will not be years,’ he added.

Two large groups of made ‘forceful’ attempts to cross the Polish border last night, guards said, including 50 rock-throwing group of migrants who marched along a railway track (pictured) 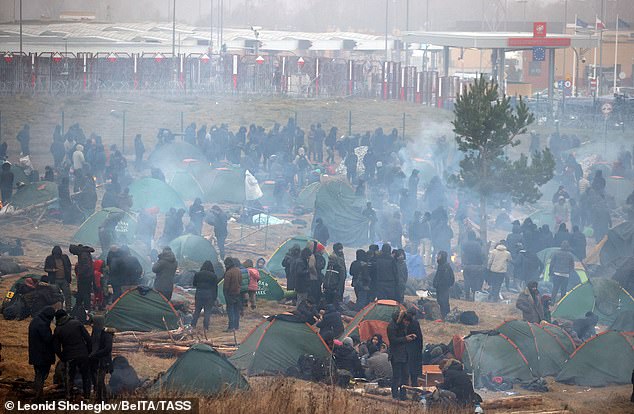 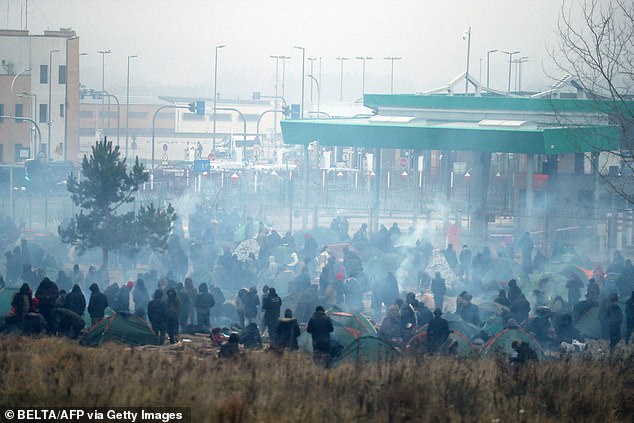 Campfire smoke rises into the morning air as thousands of migrants remain hard-up against the Polish border, waiting to cross over

Belarus guards were spotted marching hundreds of migrants into waiting vans. It is thought they are being taken to nearby temporary shelters

Mr Blaszczak added that plans for a permanent border wall to replace the current barbed wire barricades are also being drawn up.

‘We are doing everything we can to keep the border safe,’ he added.

The EU accuses Belarus of manufacturing the migrant crisis by luring thousands of vulnerable people to the country and then pushing them to the border and forcing them to make illegal crossings.

European leaders believe the move – being carried out with the backing of Moscow -is intended to destabilise the bloc as revenge for sanctions against dictator Alexander Lukashenko’s regime.

Brussels is currently readying another two rounds of sanctions against Lukashenko, including penalties for airlines and travel agents accused of helping to ferry people from across the Middle East and Asia to the country.

Polish Border Guard spokeswoman Anna Michalska said today: ‘Lukashenko has caused this problem on the border. Poland has no problem with the people of Belarus. It is the regime in Minsk that is the problem.

‘Lukashenko has created this situation to try to destabilize Poland and the EU. He has made this problem. He has done this in response to the sanctions that the EU imposed on his regime.’

Lukashenko denies the allegations, saying the migrants are legitimate asylum seekers and must be given access.

The Belarusian strongman and Vladimir Putin have also expressed ‘concern’ at a build-up of 15,000 Polish troops on the border who were sent to hold people back.

While Poland has been the main focus of migrant crossings, neighbours Latvia and Lithuania have also reported an uptick in illegal crossings in recent months.

Even Estonia, which does not share a border with Belarus, has summoned extra troops amid fears migrants could be forced across from Russia.

Some 1,700 reserve soldiers were summoned for unannounced drills on Wednesday that will include laying razor wire along the 25-mile Russian frontier. 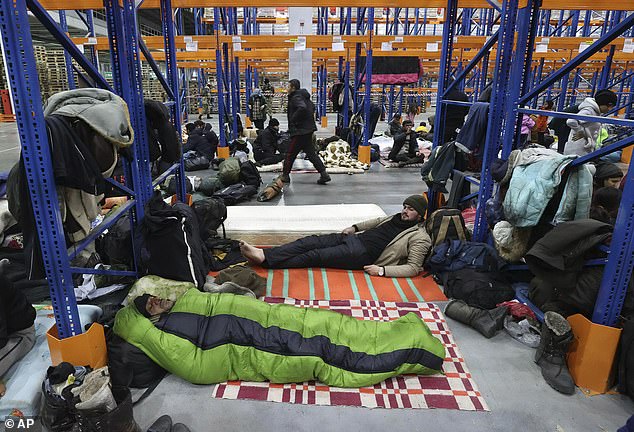 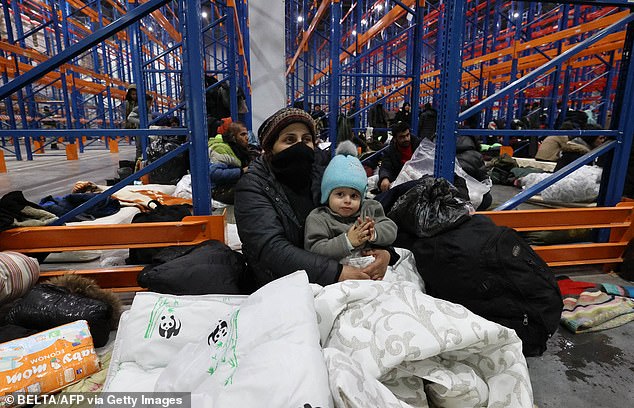 Migrants were provided with blankets and donated clothing inside the warehouse, which is the first time they have been given shelter by Belarus 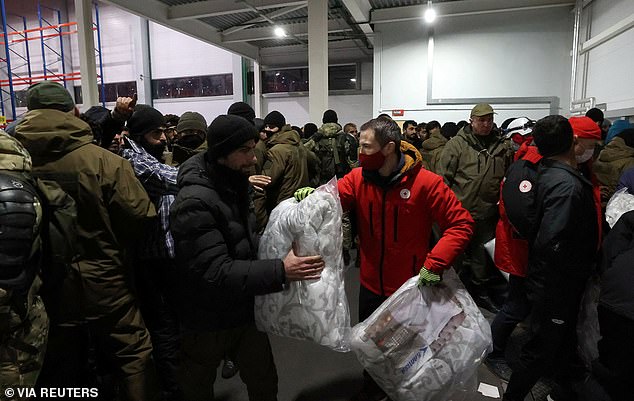 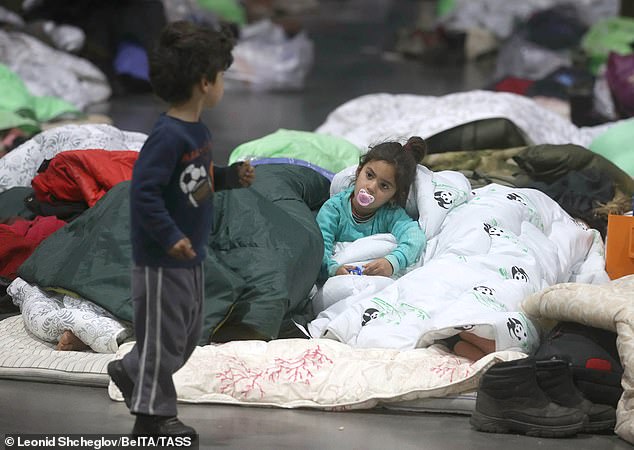 Young children are seen bedding down for the night in a warehouse close to the Belarus-Poland border, after being given temporary shelter

‘What is happening in Poland, Lithuania and Latvia also requires the strengthening of the border infrastructure in Estonia,’ said chief of Border Guard Elmar Vaher.

There are also fears the Lukashenko could push migrants into Ukraine, which is not an EU member but is involved in a longstanding confrontation with Russia.

The migrant crisis is playing out as Kiev warns thousands of Russian troops, tanks and artillery pieces are massing on the border in what the government claims is a coordinated attempt to fracture alliances in Europe.

Following pressure from the EU, several airlines have said they will now stop transporting would-be migrants to Belarus.

Iraq has also said it will start voluntary repatriations of its citizens from Belarus this week and the EU border agency Frontex is working with the Polish and Iraqi authorities on arranging charter flights from Poland as well.

Lukashenko, who has crushed opposition to his rule over nearly three decades in power, discussed the crisis with German Chancellor Angela Merkel on Monday.

It was his first phone call with a Western leader since he suppressed mass protests against his rule last year.

Russia on Wednesday welcomed direct talks held between EU and Belarus officials over a migrant crisis on the Polish border.

‘It is very important that contact has been made between representatives of the EU and the leadership of Belarus,’ Kremlin spokesman Dmitry Peskov said, days after German Chancellor Angela Merkel discussed the issue with Belarus leader Alexander Lukashenko. 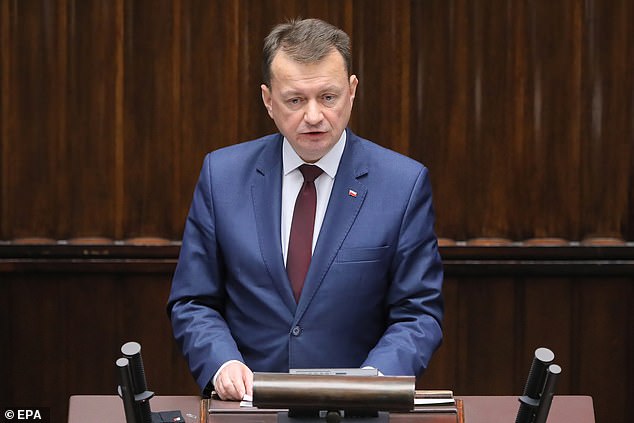 Mariusz Blaszczak, the Polish defence minister, has warned that the crisis is likely to last for months and could drag on for years 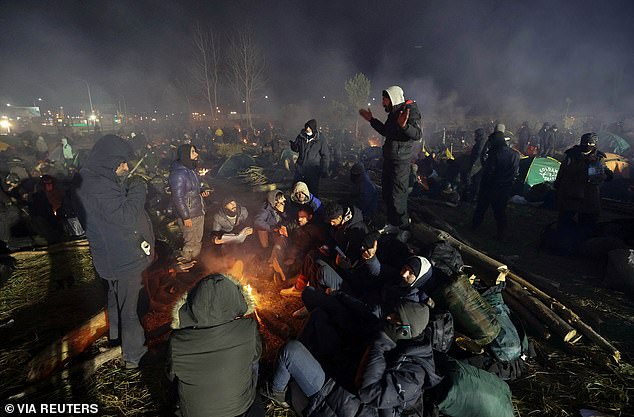 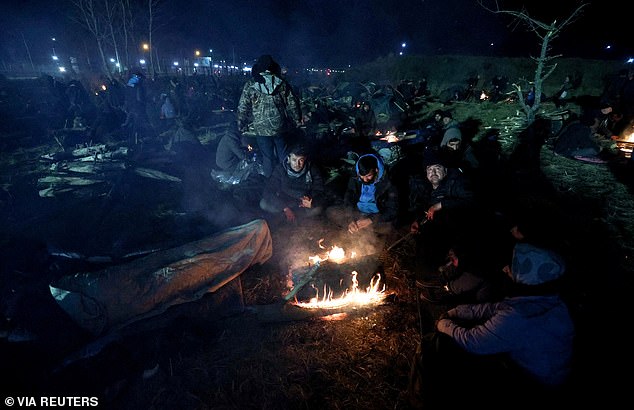 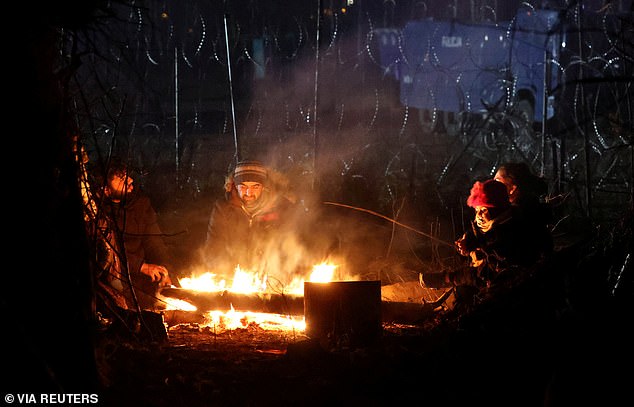 Merkel called Lukashenko on Monday to discuss the situation on the Poland-Belarus border, where thousands of migrants have gathered in a crisis the EU blames on Minsk.

It was Lukashenko’s first phone call with a Western leader since last year’s protests, that erupted over an election that the EU says he rigged.

The Kremlin said Putin and Lukashenko discussed ‘possible solutions’ for the crisis on Tuesday.

Poland and Brussels allege that Lukashenko engineered the crisis, luring migrants from the Middle East to the EU’s doorstep as revenge for sanctions against his regime over the protests.

Aid groups say at least 11 migrants have died on both sides of the border since the crisis began in the summer and have called for a humanitarian response to the crisis.

Visiting areas near the border on the Polish side, the Council of Europe human rights commissioner Dunja Mijatovic on Tuesday said the situation was ‘extremely dangerous’.

‘We need to find a way to de-escalate, to make sure the focus is really to stop the suffering,’ she told reporters.

Russian state television on Wednesday showed hundreds of migrants at an indoor centre set up by Belarusian authorities near the border where families with young children spent the night.

The Belarusian health ministry said it had hospitalised six people, including four children, from the Bruzgi camp.