The boss of debt-ridden Chinese property giant Evergrande has sold $1.1billion worth of assets including jets, art and Hong Kong flats under order from Beijing amid fears the firm’s collapse could spark a global financial meltdown.

Chinese authorities told the company’s chairman Hui Ka Yan, 63, to use some of his personal wealth to help pay bondholders, two separate people with knowledge of the matter told Reuters last month.

Evergrande is scrambling to meet its debt obligations, with Hui Ka Yan freeing up funds from luxury assets, according to state-owned China Business News on Tuesday, citing anonymous sources close to the matter.

Evergrande’s troubles in meeting bond repayments have rattled markets and left many of its investors, creditors and suppliers in financial chaos.

Xu has been injecting funds into the company since the beginning of July.

Chinese authorities told the chairman of Developer China Evergrande Group Hui Ka Yan (pictured in 2017, file photo), 63, to use some of his personal wealth to help pay bondholders

It has been used to ‘maintain the basic operations of his huge business empire,’ the paper reported, such as paying staff salaries, interest payments and some bonds and cash that is owed to investors in Evergrande’s wealth product.

It has also gone towards finishing property projects in China.

The outlet wrote: ‘So far Xu Jiayin has been personally raising money to continue the life of Evergrande.’

Guo Hui, whose cleaning business is owed more than 18 million yuan ($2.8 million) by Evergrande, had to sell his Porsche Cayenne and an apartment to raise cash and pay debts.

‘He should be selling his things,’ Guo told Reuters. ‘He had no choice once the authorities made him.’

Hui pledged one of his Hong Kong mansions of around 5,000 square feet in The Peak, Hong Kong’s most prestigious residential enclave with sweeping views over the city’s gleaming skyscrapers, for a loan from China Construction Bank in October, according to a filing with Hong Kong’s Land Registry.

The property is worth around HK$800 million ($103 million), an estate agent told Reuters and local media said it was pledged to raise about HK$300 million to repay an overdue Evergrande bond.

The tycoon, ranked as Asia’s wealthiest man in 2017, pledged two other luxury houses in the same development to Orix Asia Capital Ltd on Nov 8. for undisclosed amounts, according to the Land Registry. Local media outlet HK01 said on Tuesday the total amount raised was HK$821 million.

One of the properties is worth HK$800 million, the estate agent said, while the other one is bigger and according to HK01 is worth HK$1 billion. 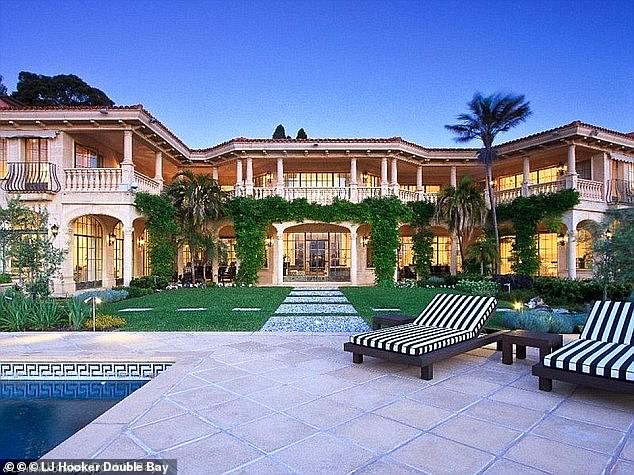 Pictured: Villa del Mare, one of the homes owned by the chairman of Developer China Evergrande Group Hui Ka Yan, in Australia. He has been told to sell his assets to help pay for the debt obligations of the property giant

Hui and Evergrande did not respond to requests for comment regarding the properties on The Peak.

China’s State Council Information Office did not immediately respond to a request for comment.

Raised by his grandmother in a rural village, Hui founded Evergrande in 1996 in southern Guangzhou city, supplying low-priced homes and building a fortune. 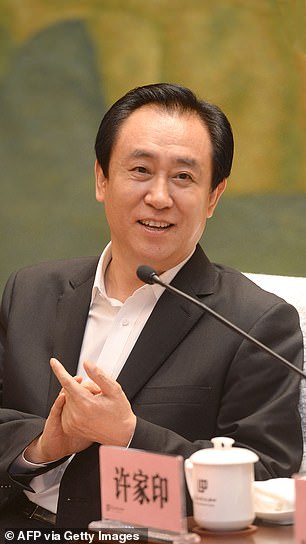 He developed a passion for calligraphy, art and Koi carp – fish seen as a symbol of good luck and fortune for which he paid tens of millions of yuan, according to a source with direct knowledge of the matter.

Under Hui’s orders, Evergrande has been selling some art and calligraphy to raise fresh capital, said the source. The source declined to be named due to the sensitivity of the situation.

Reuters could not immediately determine how much had been raised by selling the art pieces or what the money has been used for.

Evergrande did not respond to a request for comment regarding the art sale.

Hui also owns a 60-metre yacht called ‘Event’ estimated to be worth $60 million, as well as a private Airbus jet, according to Chinese media reports.

Reuters could not independently verify the ownership of Hui’s yacht and private jet.

Hui and Evergrande did not respond to requests for comment regarding his aircraft, yacht and other assets.

While Hui’s net worth has plunged over the past few years from around $45 billion in 2017, he is still estimated to be worth $11.3 billion, according to the Hurun China Rich List 2021, released last month.

But even as he moves to sell some of his personal assets, the proceeds raised pale in comparison to Evergrande’s liabilities of more than $300 billion, equivalent roughly to the gross domestic product of South Africa.

After Evergrande last week again averted a destabilising default with a last minute bond payment, its next deadline is December 28, with coupon payments totalling more than $255 million due.