Ireland has become the latest European country to reimpose Covid restrictions amid a surge in cases as winter sets in.

Starting tomorrow, all hospitality businesses including nightclubs and pubs will be forced to close at midnight, the use of Covid passports will be expanded, and people will be advised to work from home where possible.

Household contacts of people who test positive on a PCR will also be forced to self-isolate for five days even if double-jabbed, and will only be allowed out if they test negative on three separate antigen tests.

Ireland follows the lead of Austria and the Netherlands in imposing Covid curbs as Europe once again becomes the epicentre of the pandemic.

Ireland will reimpose Covid restrictions from Friday amid a surge in cases, as the Taoiseach refused to rule out going further if infections keep rising 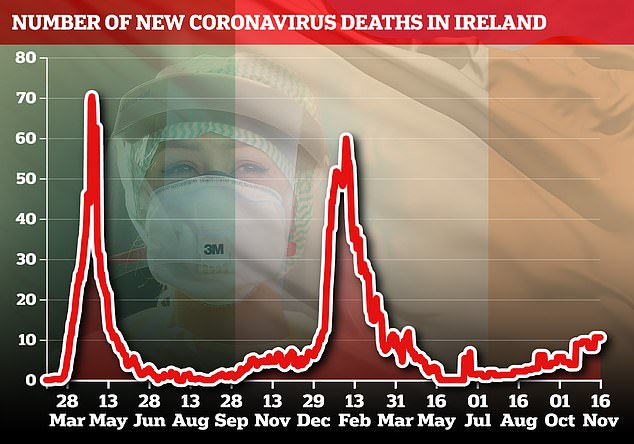 Covid deaths in Ireland are still well below the highs seen during the first and second waves, but have been ticking upwards since the end of summer

While Ireland’s current restrictions do not go as far as Austria – whose government has been accused of ‘vaccine apartheid’ after locking the unvaccinated inside their homes – Taoiseach Micheal Martin has refused to rule out going further.

‘It remains to be seen as to whether these measures will be sufficient to hold back the tide of infection and hospitalisation,’ he said in an evening address to the nation.

‘We’re not ruling out any further measures, we’ll keep them under review.’

Ireland currently requires vaccine passports to be used at indoor hospitality venues such as restaurants and bars, but will now expand them to theatres and cinemas.

New restrictions on nightclubs come just a month after they were allowed to reopen.

Mr Martin also announced that the vaccine booster programme, which has only been running since November 4, will be widened to include those aged over 50.

Until now, Ireland had only been offering boosters to those aged over 60 or older long-term residents of care facilities.

Take-up has been low, with just 341,000 jabs given to a total population of 5million.

The Health Service Executive has blamed ‘substantial non-attendance’ of booked appointments for the slow roll-out.

Those with underlying health conditions and residents of any age inside care facilities will also be included in the expanded roll-out.

Europe’s Covid winter-wave first struck in the east, where vaccination rates are broadly lower, with Russia and Latvia the first two nations to enter lockdowns. 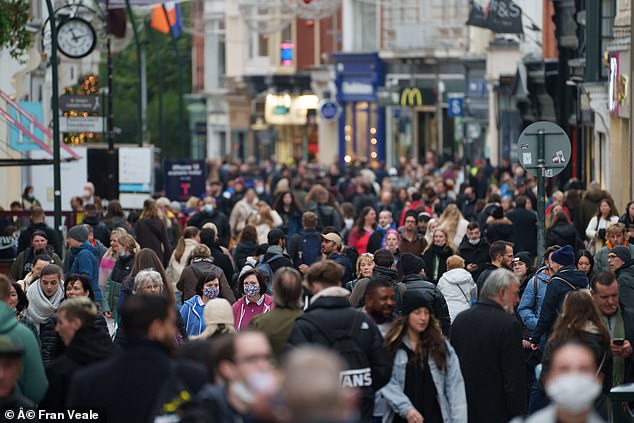 From Friday, hospitality businesses in Ireland will be forced to close at midnight while the use of Covid passports will be expanded to cinemas and theatres

Latvian Prime Minister Krisjanis Karins announced a month-long shutdown of his country a month ago, when the double-jabbed rate stood at just 57 per cent.

The Netherlands then became the first country in western Europe to follow-suit, with non-essential retail and face-to-face services such as hairdressers forced to close from 6pm.

Essential stores, clubs, bars and restaurants have to close at 8pm. Home gatherings have been limited to a maximum of four people, while all sporting matches must be held behind closed doors.

Austria then followed suit with hugely controversial measures that affect only those who are unvaccinated and do not have a medical exemption.

It means that roughly two million people have been barred from leaving their homes except for essential reasons, such as buying food or medicine.

They had already been barred from visiting restaurants, hairdressers and cinemas.

Around 65 per cent of Austria’s population has been double-vaccinated, one of the lowest rates in western Europe.

Germany, which also has a lower vaccination rate than the European average at 67 per cent, is now considering imposing similar measures. 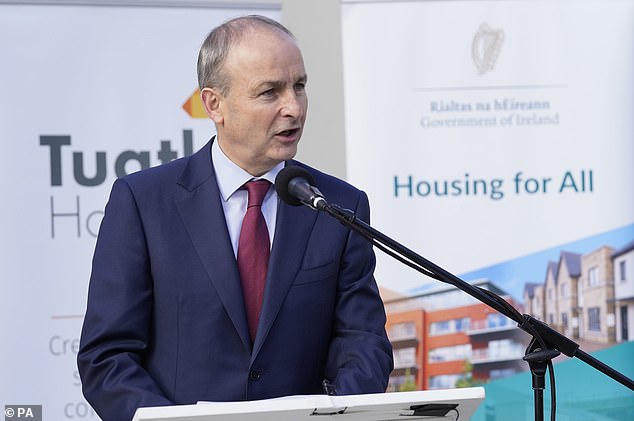 Micheal Martin, the Irish Taoiseach (file image), has refused to rule out imposing further restrictions including over Christmas if cases continue to rise

The incoming Social Democrat (SDP) government has warned that unvaccinated people will be barred from going to work and travelling on public transport.

The new government will also recommend that everyone should work from home unless they have a ‘compelling business reason’.

‘This is actually a lockdown for the unvaccinated,’ said Dirk Wiese, the deputy head of the SPD parliamentary group. Around 14 million Germans eligible to be vaccinated have not taken up the offer.

In Bavaria, and the east German states of Thuringia and Saxony, the situation is reaching a critical point amid warnings that hospitals across the country will hit capacity in the first two weeks of December.

In Saxony, those who refuse the vaccine could be limited to meeting just one person from outside their household and banned from non-essential travel by Friday.

Saxony and Bavaria are among a number of states that already demand proof of vaccination for entry into restaurants, bars and clubs.

The Bavarian government is urging Berlin to impose the same rules across the country.