Newsagent chain McColl’s crashed to an all-time low after supply chain issues left it struggling to fill its shelves.

Shortages of key products, lorry drivers and workers at distribution centres have intensified over the past three months. The shares fell 18.6 per cent, or 3.35p, to 14.64p.

McColl’s, with more than 1,200 stores in Britain, tried to reduce disruption by working with supermarket giant Morrisons, its wholesaler.

Newsagent chain McColl’s warned that its full-year results ‘may fall short’ of expectations, with profits of between £20m and £22m, down from a previous forecast of £27m

However, it was unable to fully address the shortages, and as a result, revenues were ‘significantly lower’ than expected.

McColl’s warned that its full-year results ‘may fall short’ of expectations, with profits of between £20million and £22million, down from a previous forecast of £27million.

Chief executive Jonathan Miller said: ‘We are working with our Morrisons to restore in-store product availability as quickly as possible.’

Retailers across the UK have been grappling with supply chain strain as the end of pandemic restrictions and a shortage of workers have made it harder to shift goods ahead of the key Christmas shopping period. 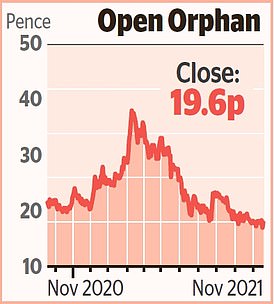 Its subsidiary, Hvivo, has inked a £5.1million deal with a bio-pharmaceutical company to test a new product using its human study model.

The study, which is due to begin in the second half of next year, will evaluate the product’s effectiveness against respiratory syncytial virus, a common infection that can cause severe problems for young babies, the elderly and those with weakened immune systems.

Miller is also McColl’s biggest shareholder with a 14.9 per cent stake and the share price fall meant a big hit for his paper fortune.

Equities came under pressure after UK inflation soared to a ten-year high of 4.2 per cent in October, pushing up the pound’s value.

The news increased the chances of a December hike in interest rates from the Bank of England, which was good news for some of the UK’s domestic banks.

Tools and building equipment lender Speedy Hire tracked up 7.1 per cent, or 4.5p, to 68.3p after it swung back into profit in the six months to the end of September amid a boom in demand from major infrastructure projects.

Pre-tax profits in the period came in at £14.3million compared to a £0.4million loss a year ago, while revenues jumped by 28 per cent to £188.6million.

Credit data firm Experian upped its full-year guidance after profits climbed 43 per cent to £654million in the six months to the end of September. Revenues rose 23 per cent to £3.1bn.

It now expects revenue growth for the year ending March 2022 to be between 15 per cent and 17 per cent, higher than previous predictions. Shares fell 4 per cent, or 139p, to 3373p.

High street stalwart Marks & Spencer dropped 1.9 per cent, or 4.5p, to 227.7p after analysts at Jefferies downgraded it to ‘hold’ from ‘buy’ due to ‘limited upside’ following a recovery in the business.

But the broker increased its target price to 250p from 220p, saying the business was experiencing strong tailwinds.

Mid-cap firm Caledonia Investment added 2.7 per cent, or 100p, to 3850p as it sold its stake in lab analysis firm Bioagilytix to US private equity group Cinven.

It expects to make £136million from the sale, a 167 per cent rise on the £51million it valued the stake at in September.

Storage unit provider Safestore ticked up 0.5 per cent, or 6p, to 1255p after revenues jumped 18 per cent year-on-year to £48.9million, for the quarter between August and October, helped by high levels of occupancy in its units. These reached 85.1 per cent, up five percentage points on the same period a year ago.

Meanwhile, Technology Minerals, a firm developing technology to recycle electric car batteries, had a strong first day on the London Stock Exchange’s main market. Shares were 3.25p, up a penny on their float price of 2.25p.