South American football chiefs have suspended two referees, including a VAR official, for failing to punish Argentina’s Nicolas Otamendi after he elbowed Brazil winger Raphinha in the face and caused his mouth to bleed.

During the first half of Tuesday’s World Cup qualifier between the two South American rivals, Otamendi’s elbow caught Leeds star Raphinha in the face.

The former Manchester City defender then picked the Brazilian winger up and back to his feet, but his mouth was gushing with blood. 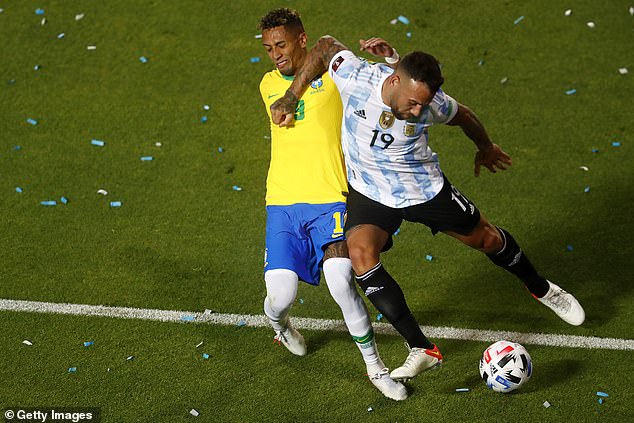 It later transpired that Raphinha needed five stitches in his mouth to fix the bleeding and South American football organisers CONMEBOL have sanctioned referee Andres Cunha and VAR Esteban Ostojich for failing to notice the clash or punish Otamendi.

A CONMEBOL statement claimed that on-field referee Cunha and VAR Ostojich made ‘serious errors in the exercise of their function’ in their handling of the situation.

The statement continued: ‘As a result, the CONMEBOL Referee Committee resolve to suspend the referees Andres Ismael Cunha Soca and Esteban Daniel Ostojich Vega for an indefinite period in the exercise of their functions in competitions organised by CONMEBOL.’

Argentina and Brazil held each other to a goalless draw on Tuesday as the former joined the latter in qualifying for next winter’s World Cup in Qatar, but Selecao boss Tite was furious that Otamendi was not sent off. 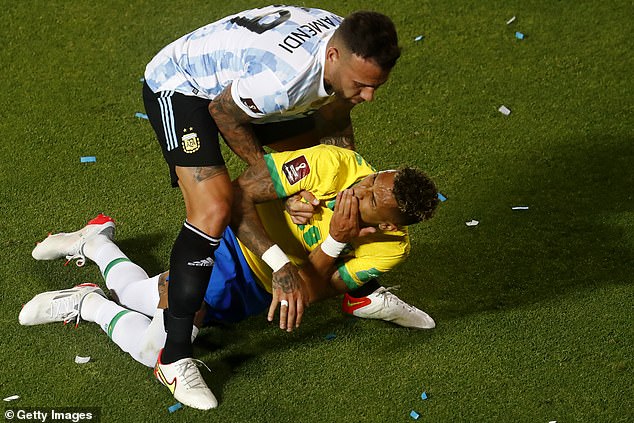 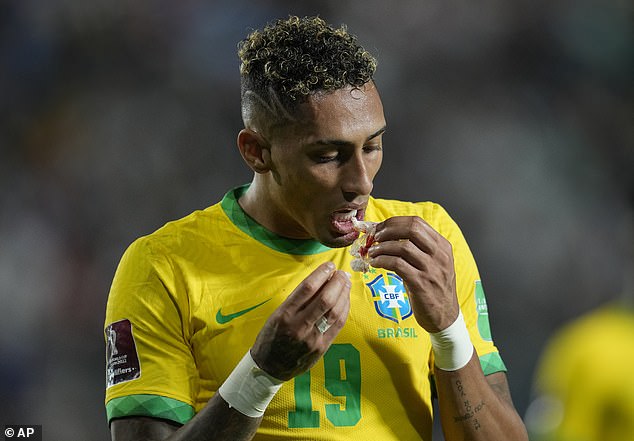 Raphinha needed five stitches in his mouth after the clash, with the VAR official suspended too

‘Would that determine the result? I do not know. High level VAR referee cannot work in this way, it is inconceivable. It’s not the term I wanted to say, I’m saying this because I’m polite.’

The decision not to send off Otamendi baffled many in the Brazilian community, including former Arsenal midfielder Gilberto Silva – who slammed both the linesman in front of the incident and the VAR in use on Tuesday.

‘The VAR must be sleeping,’ Gilberto posted on his Instagram story. ‘That is, without mentioning it was in front of the linesman.’

Otamendi, meanwhile, claimed on Instagram on Wednesday that he was focused on ‘all (of the) ball’ when questioned about the Raphinha challenge.