Serena Williams has spoken of her ‘devastation and shock’ as she urged an investigation into the disappearance of Chinese tennis star Peng Shuai.

Fears continue to mount for Shuai, 35, who was once ranked as the top female double’s player in the world, who has not been seen since accusing the country’s former vice premier of rape on November 2.

23-time Grand Slam champion Williams, 40, publicly called on the authorities to launch an investigation into Shuai’s disappearance and urged those involved to ‘not stay silent’.

She tweeted on Wednesday: ‘I am devastated and shocked to hear about the news of my peer, Peng Shuai. I hope she is safe and found as soon as possible.

‘This must be investigated and we must not stay silent. Sending love to her and her family during this incredibly difficult time.’

It comes after Chinese state media published an English-language email they claimed was written by Peng which said: ‘I’m not missing, nor am I unsafe. I’ve just been resting at home and everything is fine.’

Steve Simon, the head of the Women’s Tennis Association, said he has a ‘hard time believing’ that Peng wrote the email herself and it ‘only raises my concerns as to her safety and whereabouts.’

Simon said that nobody from the WTA has been in direct contact with Peng since she accused 75-year-old Communist party official Zhang Gaoli of coercing her into sex on Chinese social media two weeks ago.

23-time Grand Slam champion Serena Williams, 40, publicly called on the authorities to launch an investigation into Shuai’s disappearance and urged those involved to ‘not stay silent’ 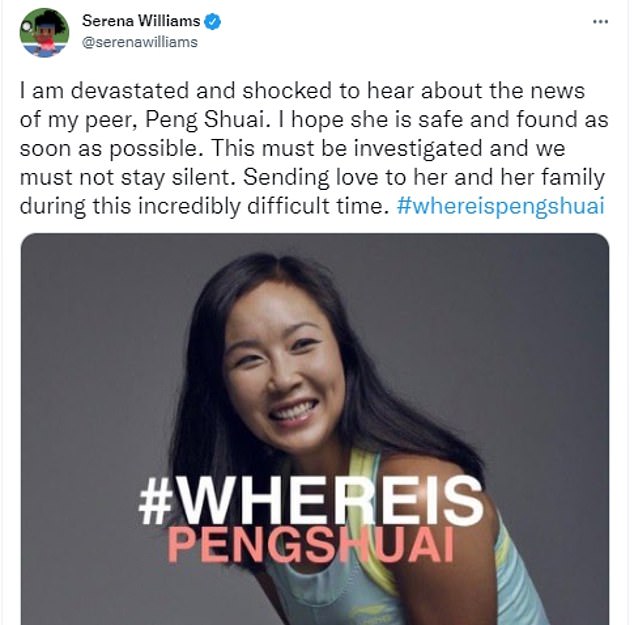 Peng Shuai, 35, a Chinese tennis star, has not been seen since November 2 when she posted on social media accusing a senior Communist official of sexual abuse

Social media users were quick to point out oddities with the ’email’, including that it is addressed to ‘everyone’ despite allegedly being a private message and that a typing cursor appears to be flashing in the middle of the message – suggesting it is open in a word processor

‘The statement released today by Chinese state media concerning Peng Shuai only raises my concerns as to her safety and whereabouts,’ he said.

‘I have a hard time believing that Peng Shuai actually wrote the email we received or believes what is being attributed to her.’

The email published by CTGN says: ‘Hello everyone this is Peng Shuai,

‘Regarding the recent news released on the official website of the WTA, the content has not been confirmed or verified by myself and it was released without my consent.

Peng claimed to have been involved in a ten-year affair with Zhang Gaoli (pictured), saying he sexually assaulted her in 2018

‘The news in that release, including the allegation of sexual assault, is not true. I’m not missing, nor am I unsafe. I’ve just been resting at home and everything is fine.

‘Thank you again for caring about me.

‘If the WTA publishes any more news about me, please verify it with me, and release it with my consent. As a professional tennis player, I think you all for your companionship and consideration.

‘Once again, thank you for your consideration.’

Social media users were quick to point out oddities with the email, including that Peng opens ‘hello everyone’ even though it was allegedly a private correspondence addressed to Simon.

They also pointed out that a typing cursor appears in the middle of one of the sentences, suggesting the ’email’ is actually a screenshot taken directly from a document that is open in a word processor.

Advocacy group Chinese Human Rights Defenders added that the email ‘should not be taken at face value’, and that the Chinese state has a history of arbitrarily detaining people who implicate the government or its officials in wrongdoing.

Fellow tennis players have been leading appeals for news of Peng’s safety, with Japanese ace Naomi Osaka saying she is ‘shocked’ by her sudden disappearance.

Peng first made headlines on November 2 when she uploaded a lengthy post to her personal Weibo account – China’s version of Facebook – accusing Zhang of coercing her into sex during a years-long affair.

In the post, Peng revealed that she and Zhang – who is married – were involved in an on-off affair dating back to 2011 when the pair met in the port city of Tianjin, where Zhang was premier at the time.

The post details how Peng slept with Zhang once that year, and possibly a second time before he was promoted to the country’s powerful political bureau and cut all ties with her.

But he allegedly rekindled the affair in 2018 after his retirement from politics, inviting Peng for dinner with his wife after which he pressured her into sex.

That kicked off a three-year affair, Peng alleged, which she described as ‘unpleasant’. 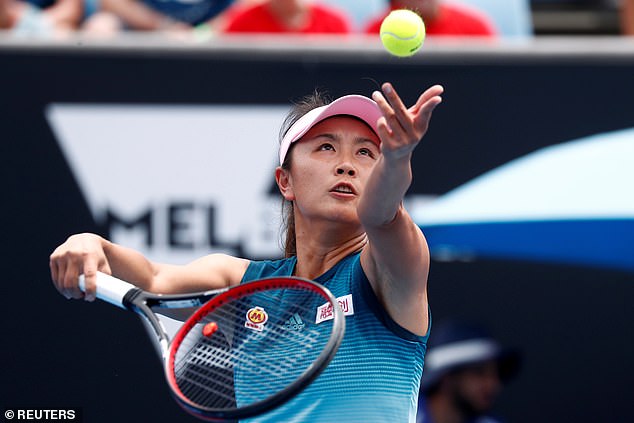 Peng is a household name in China after becoming the first Chinese woman to rank No.1 in doubles, and is currently ranked 14th

In the post, she admits to having ‘no evidence’ that the affair ever took place because Zhang insisted on keeping it a total secret.

Her post concluded: ‘You’ve said you are not afraid.

‘But even as an egg hurled at a rock, a moth to a flame for self-destruction, I will speak the truth with you.’

It is not clear why she choose to reveal the affair now.

Zhang was a vice-premier in Beijing and served on the ruling party’s powerful seven-member standing committee of the political bureau.

Peng is a household name in China, having become the first Chinese player to be ranked No.1 in doubles by the Women’s Tennis Association in 2014.

She is currently ranked 14th in global standings.

Her post was taken down within 20 minutes of being uploaded to Weibo, which is heavily monitored by the Chinese state.

For a time Peng’s profile appeared to be disabled, and was not showing up in searches on the site.

The profile later reappeared, but the offending post had been removed and comments on all of Peng’s other posts disabled.

Weibo users were also banned from posting anything about Peng or Zhang, even if the post did not mention the alleged affair, and searches for terms like ‘tennis’ were disabled for a time on Chinese websites.

China’s foreign ministry has denied all knowledge of the matter and Zhang has also not responded to requests for comment.

Lv Pin, a Chinese activist for women’s rights, tweeted shortly after the post was revealed: ‘They [the CCP] have always been rotten and decadent.

They’ve always been exploiting women, but it’s only that it’s been done behind black curtains.

‘Her revelation is very important, for it lets people get a glimpse of the real life of China’s highest leaders, their excessive abuse of power, corruption and their fear behind a moral façade wrapped in power.’