IAN LADYMAN: Steven Gerrard has shown he is ready to punch upwards in a star-studded league… he knows his own mind and has shown sharp edges publicly before

For all the talk about Steven Gerrard and Liverpool at his Aston Villa introduction this week, it should be remembered that he was once brave enough to leave.

It was during an interview with this newspaper and the Daily Telegraph in 2014 that Gerrard first mooted — completely out of the blue — that he may not sign a new contract at Anfield.

His management team were nervous about it. There was even an agreement reached with both titles not to put the statement in a headline.

But Gerrard knew exactly what he was doing and saying that day as he sat in a sports centre in Liverpool nominally to promote a new shade of Lucozade.

‘I won’t be retiring this summer,’ he said. ‘I will play beyond this season. We will have to wait and see if that’s at Liverpool or somewhere else.’

Liverpool and Brendan Rodgers thought the club captain would sign a new contract. He did not. He went to Los Angeles and a connection with his childhood club was abruptly severed.

So Gerrard knows his own mind and has some hard edges, too. They were occasionally on display as he sat behind a press conference table at Villa Park on Thursday. 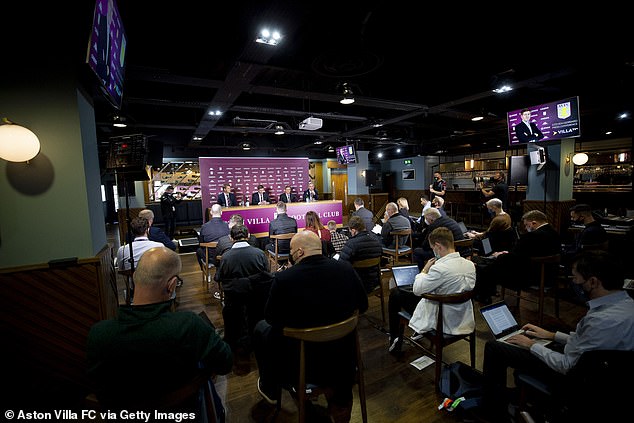 A packed room greeted Gerrard, who showed his hard edges are still very much present

Occasionally those eyes narrowed and that has always been a giveaway. And this is all just as well. The challenge that he fronted and overcame with Rangers in Scotland was huge, his work at Ibrox deeply impressive. But it pales in comparison to what faces him now.

Villa are a big club, the biggest — along with Nottingham Forest — in the Midlands. But they are not an elite club, despite their chief executive Christian Purslow’s neat reminder that they once won the European Cup. That was in 1982.

They wish to move forward and to do so without much pause. They talk of a five-year plan that has stalled. Gerrard himself suggested that he has his eyes on European football. Given the quality of the teams and particularly the managers ahead of him, that is a daunting challenge.

Arguably, the top flight of English football has never boasted such a rich seam of coaching talent. Gerrard’s task is to move into and then through that field. 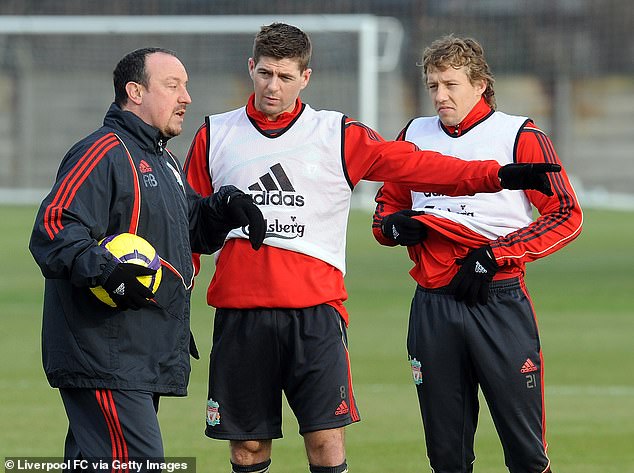 The credentials of Jurgen Klopp and Pep Guardiola are beyond compare but beneath them lies another stellar tier including the likes of Antonio Conte and Thomas Tuchel.

And then there is Rafael Benitez — known well to Gerrard — and Rodgers while Graham Potter’s Brighton and Marcelo Bielsa’s Leeds also sit above Gerrard’s Villa in the table. Even Watford, a place below Gerrard’s new club in 17th, are managed by Claudio Ranieri, a Premier League winner with Leicester as recently as 2016.

On Thursday Gerrard touched on the concept of punching upwards. As a player, he said, he was comfortable in combat with the likes of Roy Keane, Patrick Vieira and Frank Lampard. More challenging were the likes of Zinedine Zidane and Ronaldinho.

Now, at the age of 41, he is back amongst it. In Scotland he had one club to beat and by the time he left it was no longer even a contest. 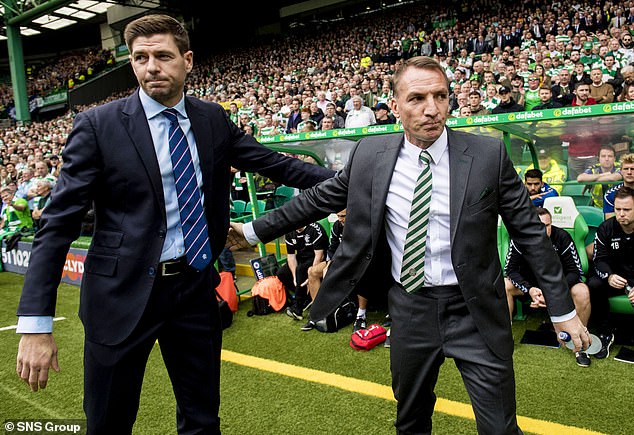 Just as he did briefly in Scotland, Gerrard will also be going up against Brendan Rodgers

Back in the Premier League, the metaphorical tackles will arrive from every angle and with a ferocity and regularity he recognises.

The top flight of the English game remains an environment in which reputations are left at the door and if you have any sense your ego is set to rest on the very next peg.

Gerrard starts his initiation against Potter’s clever Brighton side at Villa Park on Saturday afternoon. In all likelihood, they will quickly tell Gerrard much of what he needs to know.