Elias Kachunga opened the scoring for the visitors after just 68 seconds when his long-range effort deflected past goalkeeper Ethan Ross.

Stockport were 2-0 down a few minutes later when defender Ashley Palmer turned the ball into his own net.

Paddy Madden pulled one back from the spot, but County defender Mark Kitching headed the ball beyond onrushing goalkeeper Ross to gift a third goal to Amadou Bakayoko in the 28th minute.

The home side showed remarkable resilience to reduce the deficit just before half-time through Quigley, before Palmer made up for his earlier error by heading in from a corner to draw them level with five minutes to go in normal time.

Stockport deservedly took the lead five minutes into extra time when Quigley hooked the ball past the goalkeeper, before Ollie Crankshaw wrapped up the tie on the break to book a trip Rotherham in the second round. 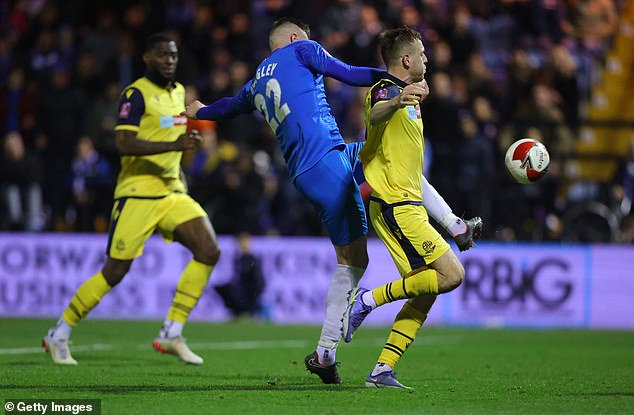 Crankshaw had to wear a replacement shirt for the final few seconds after losing his amid the wild celebrations.

And the referee had to wait to blow for the final whistle until a corner flag was returned by fans who had spilled on to the pitch.

‘Unbelievable game, this competition has provided things like that in the past but you’ll go a long way to match something like that,’ said Stockport boss Dave Challinor, who took charge earlier this month. 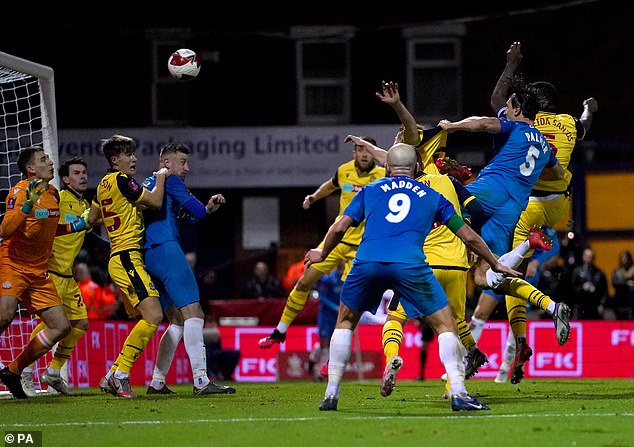