Austria has become the first European country to make Covid vaccines mandatory for everyone as the government scrapped its ‘vaccine apartheid’ in favour of a full nationwide lockdown today.

Chancellor Alexander Schallenberg announced that, from February 1, everyone will be legally required to have a Covid vaccine or face unspecified ‘penalties’. He did not make it clear which age groups will be included, though it is assumed there will be exemptions for the very young and those who cannot be jabbed for medical reasons.

‘For a long time there was consensus in this country that we do not want vaccinations to be compulsory,’ he said, before adding: ‘For a long time, maybe too long, it was assumed that it would be possible to achieve a high vaccination rate even without an obligation. Now we have to face reality.’

Health Minister Wolfgang Muckstein said the government has consulted with constitutional lawyers who suggested such a move would be legal, but said the start of the mandate has been pushed to next year to allow for a ‘proper review period’.

The move is likely to prove hugely controversial, and comes after Austria locked down only unvaccinated people earlier this week in a move dubbed ‘health apartheid’. That move was today scrapped in favour of a full lockdown, which will confine everyone to their homes starting Monday except for ‘essential’ reasons.

The shock announcement came as it was revealed that Europe is now in the midst of its biggest-ever Covid wave with the continent’s one-day infection tally hitting a record high on Wednesday.

There were 310,000 Covid infections registered across Europe in the last 24 hours, according to the Our World in Data site, which tops the previous one-day peak of 290,000 cases logged around the same time last year.

Meanwhile Ireland, which imposed a nigh-time curfew on hospitality businesses this week, has today placed its hospitals on a ‘war footing’ with routine operations cancelled to make room for Covid patients amid a warning from the country’s top doctor that intensive care medics face ‘unthinkable’ choices over who to give care to.

And Germany’s incoming Chancellor Olaf Scholz said almost 30 million vaccines need to be administered before the end of the year to ward off the worst effects of the winter wave, which would require the country to more-than double the number of shots it currently gives each day.

Protesters gather in front of the Austrian embassy in France overnight to protest the government’s lockdown of the unvaccinated, even before the chancellor announced that jabs will become mandatory 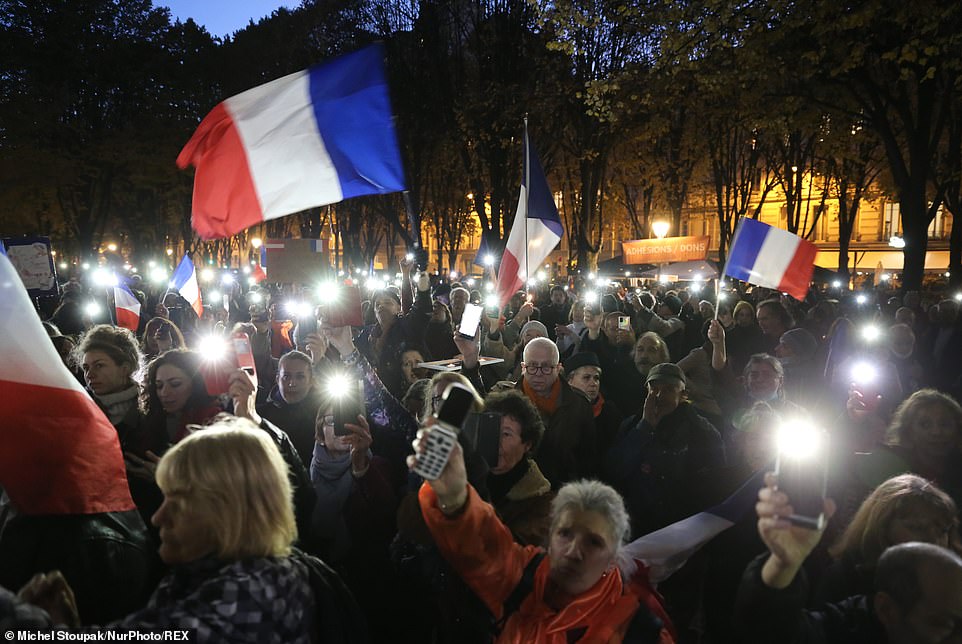 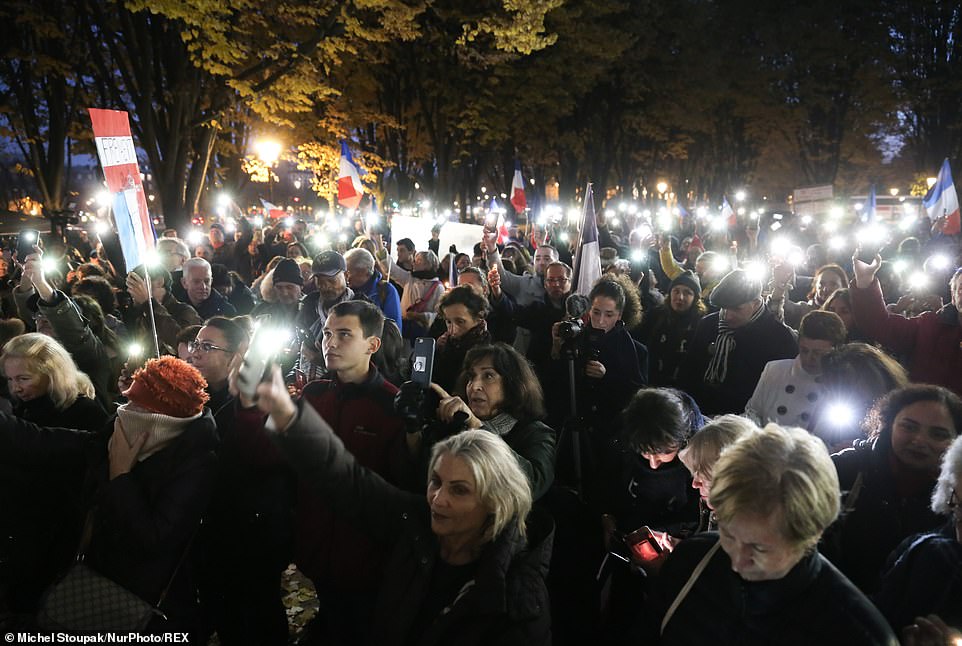 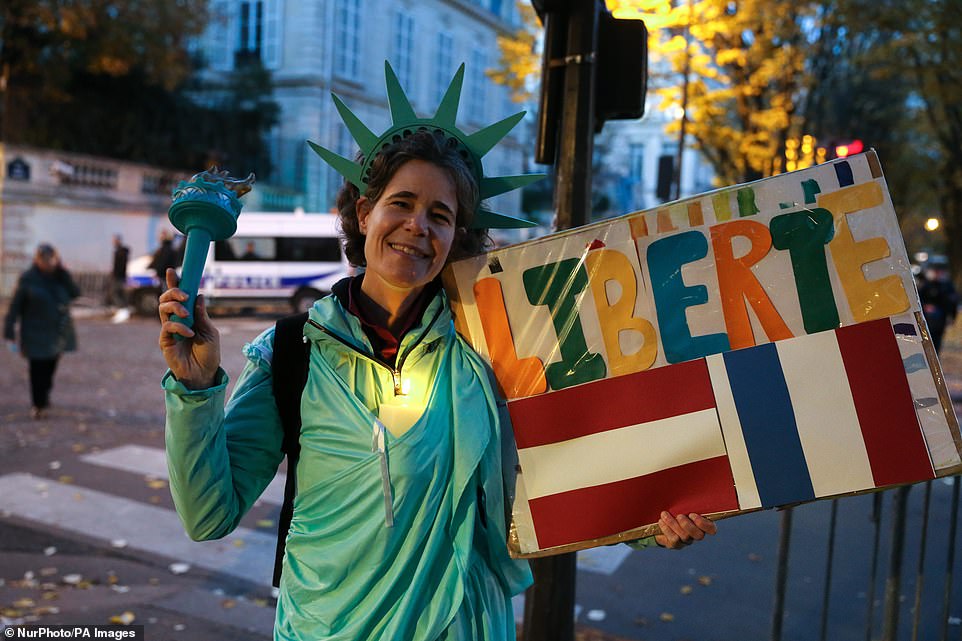 He spoke a day after Germany put forward new rules that would restrict the movements of unvaccinated people in states where hospital admissions are high. The Bundestag is due to vote on the new laws today.

Meanwhile Italy became the latest country to target the unvaccinated for lockdown, with a government spokesman saying it is ‘inevitable’ they will face harsher restrictions when a new decree is published next week.

The statement came following a meeting between health minister Roberto Speranza and undersecretary of state Roberto Garofoli, who agreed that the outbreak is worsening and that action is needed to tackle it.

Regional Affairs Mariastella Gelmini declared that there ‘is no desire to divide the country’ but added ‘if the increase in infections and hospitalizations were to lead to new restrictions, it would not be conceivable to put the vaccinated and the unvaccinated on the same level.’

Austria’s new vaccine mandate is likely to prove hugely controversial, after the government had already attracted criticism earlier in the week for imposing ‘apartheid’ on the un-jabbed.

While the move provoked anger it also achieved the desired effect, with hundreds of thousands turning out for jabs and raising the double-jabbed level to 66 per cent – slightly below the European average of 67 per cent.

But the lockdown measures had failed to curb a rise in infections, with a record 15,000 new cases logged Thursday. That prompted two regional leaders to threaten that they would impose a full lockdown in their states independent of the government, if the Chancellor failed to act.

Other European countries are also tightening the restrictions as cases surge across the continent.

The World Health Organization has described the continent as the ‘epicentre’ of the pandemic. The restrictions imposed in Germany last night mean only the double-jabbed, or holders of a recovery certificate, can attend restaurants, sporting venues and cultural events. 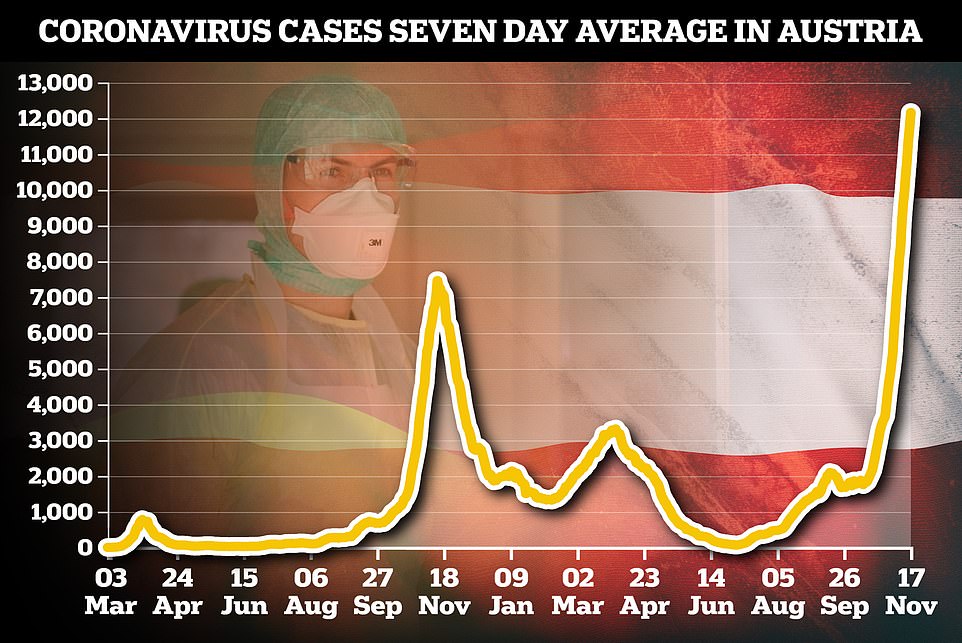 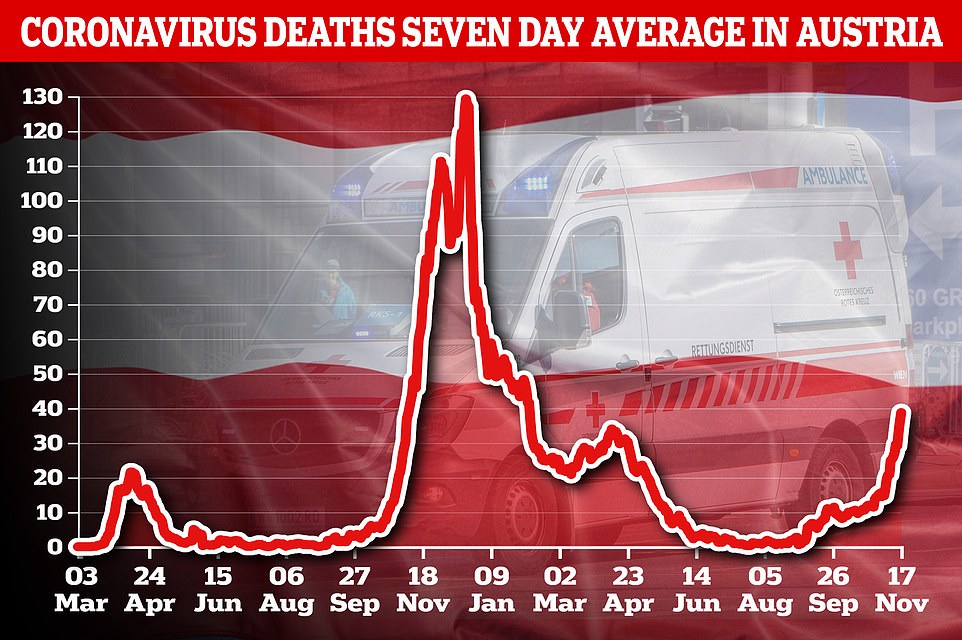 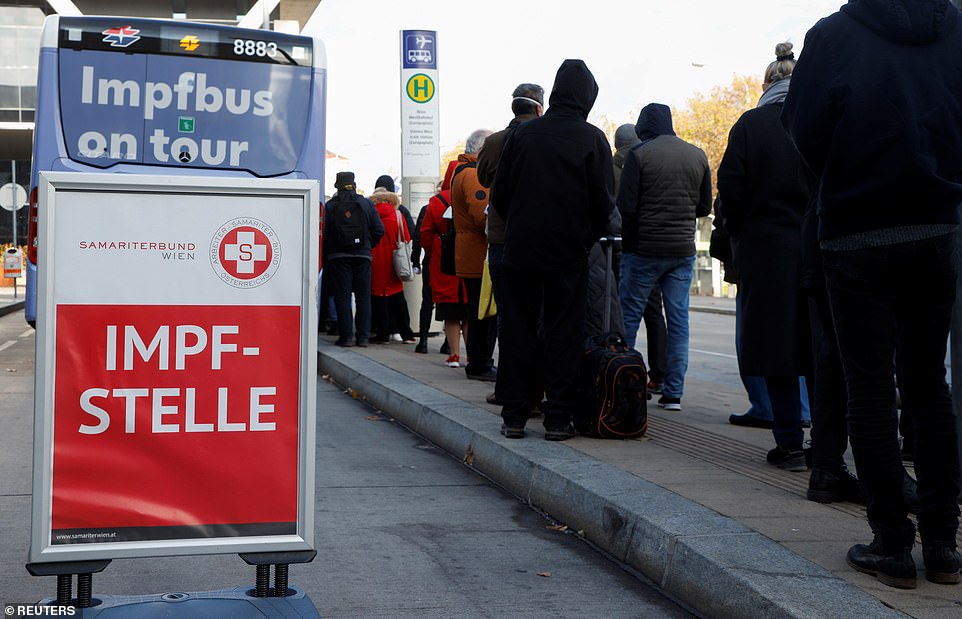 Germany’s clampdown will apply in regions where there are more than three Covid patients in hospital for every 100,000 people.

‘Anyone who cannot see that is making a very big mistake,’ he said, pointing to yesterday’s record surge in infections of 65,371 cases in 24 hours.

Austria, too, hit a new peak on Thursday, recording 15,145. The Alpine nation, which has fully jabbed 63% of its population, issued a diktat earlier this week ordering the unvaccinated to stay at home.

They may leave their homes for essential reasons only and rule-breakers can be hit with fines as high as €1,450. Two regions, Upper Austria and Salzburg, announced full shutdowns yesterday, even for those who have been jabbed.

‘We no longer see any alternative to a lockdown,’ Salzburg governor Wilfried Haslauer said.The Netherlands and Belgium have also brought in a partial closure of their economies.

Marco Cavaleri of the European Medicines Agency said ‘unacceptable low vaccination rates’ in some countries as well as the Delta variant were driving up cases.